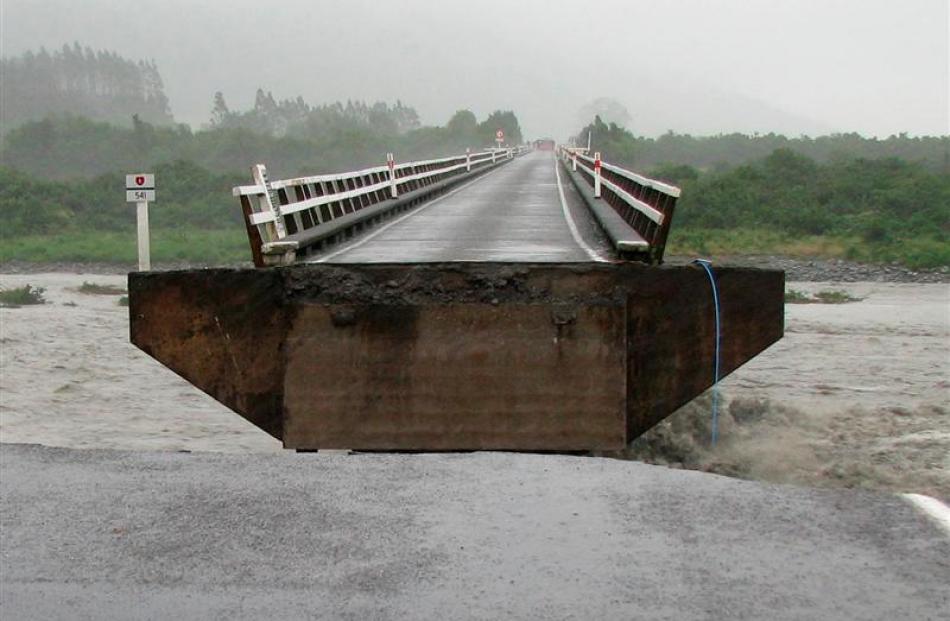 A section of the Wanganui River bridge, near Harihari, on the West Coast, was swept away by floodwaters yesterday, forcing the closure of State Highway 6 until further notice. Photo from Hokitika Guardian. 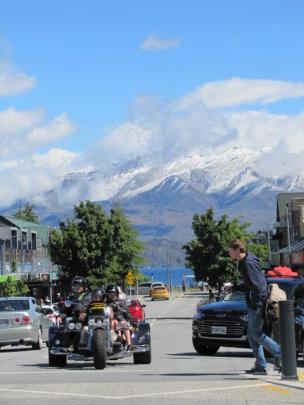 Snow on the hills around Wanaka this morning. Photo Mark Price 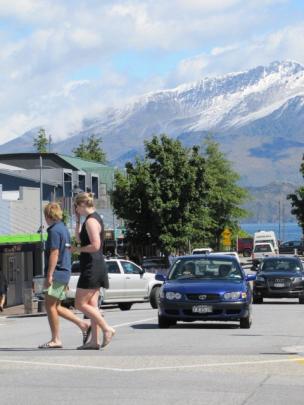 Snow on the hills around Wanaka this morning. Photo Mark Price

Snow fell on the Lindis Pass in Otago overnight, forcing travellers to abandon their vehicles near the summit.

"But I imagine at this time of year the snow's not going to last long."

The centre of the island and the West Coast have "copped it" over the last few days, Mr Booth said.

The West Coast road via Lewis Pass through Murchison had closed, forcing travellers to make a seven hour detour around Blenheim and Kaikoura to get to the east coast of the island.

Last night severe thunderstorm warnings were issued for the Westport area as the last of the system moved through.

Nearly 600mm of rain has fallen on the West Coast in the past 48 hours.

A vital one-lane bridge on State Highway 6, just north of Harihari, was washed away yesterday.

He said that at best it would open tomorrow, but this could take longer if the bridge's foundation had been damaged.

The only fibre-optic cable to the South Westland area, which runs along the Wanganui River bridge and which about 1000 residents rely on for phone and internet connections, was also cut when part of the bridge was swept away after floodwaters changed the course of the river, wiping out about 40m of the northern approach to the bridge.

Technicians were on their way to the site to begin reconnecting the cable, which it was hoped would be completed overnight.

Central and northern areas of the North Island were today likely to see some rain with possible heavy falls and there was also a chance of a heavy shower or thunderstorm developing over isolated areas across eastern South Island regions, WeatherWatch.co.nz said.

West Coasters would likely see further showers today however the bulk of the rain had now moved north and disbanded a little.

"There's been a tremendous amount of rain and (we are) are surprised there weren't further issues," weather analyst Richard Green said.

"For this amount of rain to have fallen over a relatively short period of time we're thankful that more people weren't caught up in the serious weather conditions," he said.

Half metre of rain has fallen over parts of the West Coast and well over 400mm of rain in Milford Sound where about 120 trampers had been caught out and stranded by the weather.

There were concerns holidaymakers camping downstream were not heeding warnings to move away from the river because they were basking in sunshine, Mr Henderson said.

The situation was similar further north at the Rakaia and Waimakariri Rivers with increased river flow. Police advised the Rakaia River was extremely dangerous and nearly across the road on the northern side of the Rakaia Gorge bridge.

Police had also urged the evacuation of the Rakaia huts, near the river mouth, and low-lying areas.

The Waitaki Lakes had absorbed much of the rain in the catchment and Meridian Energy was keeping an eye on levels of Waitaki River, he said.

A Department of Conservation spokesman said the ''high alert'' issued for the Young Valley in the Mt Aspiring National Park had been lifted, but rivers and streams within the national park might still be swollen.

Otago Regional Council resource science manager Matt Hickey said the council would be monitoring the lower Clutha River, near Balclutha, for the next few days.

''All the rain in the headwaters is making its way down ... Below Roxburgh Dam is now over 1000 cumecs, which is quite a lot. Contact Energy said it could get up to 1400 cumecs.''

Farmers on the council's warning list were phoned yesterday and told to move stock from low-lying areas.

He expected high river levels around Balclutha for about a week, Mr Hickey said.

Conditions for tomorrow and the weekend are looking brighter for much of the country with only isolated showers in the northeast and far south of the country.

Temperatures should be warm to be very warm over many areas on Saturday and Sunday and beaches, lakes and rivers could be the best places to cool off.