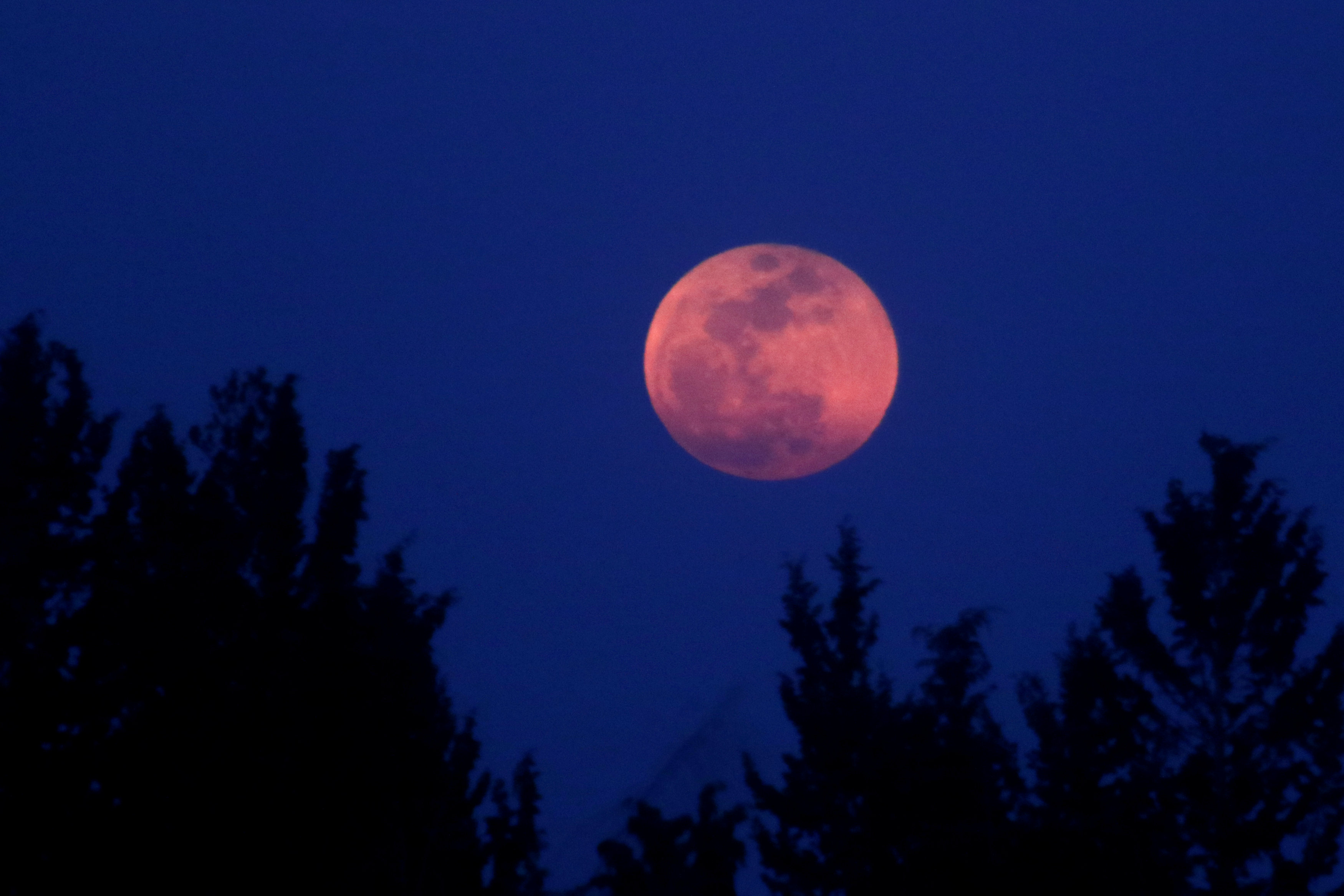 A blood moon will be visible from Europe, Africa and the Middle East between sunset and midnight on July 27 and then between midnight and sunrise on July 28 in much of Asia and Australasia. Photo: ODT files
Southern star-gazers are about to get a once-in-a-lifetime glimpse at a “blood moon” like no other.

A few minutes after 8am on Saturday (NZ time) - and weather permitting - people in southern areas of the country should be able to view a rare celestial event called a selenelion.

This occurs when an eclipsed moon could be seen on one horizon, while the rising sun could be observed on the other.

Dr Duncan Steel, of Otago’s Centre for Space Science Technology, said this might be figured impossible, given an eclipse occurred when the sun, Earth and moon were all in a straight line.

“If the moon is above the horizon then the sun must surely be below it - but the bending of the rays of light caused by our atmosphere makes it feasible to see both the eclipsed moon and the sun at the same time, so long as you are in the right place.”

The areas of our planet from which this can be experienced were very limited, because the total lunar eclipse must be ongoing at the time of moonset and sunrise.

“In this case, the further south you are in New Zealand the better, with Otago and Southland being favoured.”

In Auckland, the eclipse would still be partial as the moon disappeared below the horizon.

For those in areas from Whanganui to Wellington, there was just a slim chance of glimpsing the totally-eclipsed moon as the sun peeked above the horizon.

The opportunity was longer in the southernmost parts of the country.

In Invercargill, there was five minutes between sunrise at 8.12am and moonset shortly after, with the moon entirely within Earth’s shadow.

In Dunedin, the interval was reduced to four minutes; in Christchurch, three minutes.

During the total eclipse - which begins at 7.30am New Zealand time - the moon was much fainter than it usually appeared, and was coloured between dark brown and blood red.

Steel said the colouration of this so-called “blood moon” - a spectacle shrouded in ancient superstition - was due to some sunlight leaking through Earth’s atmosphere and reaching the moon.

Red light had a better chance of doing so for the same reason the sky was blue - shorter wavelengths were scattered more efficiently by the molecules in our atmosphere.”

To witness this selenelion event, obviously clear skies are needed, and you need to be in a location with a view to where the moon will set in the west-south-west and also to where the sun will rise in the east-north-east,” he said.

MetService was forecasting fine conditions but with high cloud over most southern spots for Saturday, although Gore and Invercargill could see showers.

“The higher you are, the better, because the sun will be barely clearing the horizon as the moon sets in the opposite direction.”

The effect of the atmosphere was to bend the light from each celestial object by about half a degree, which also happened to be their apparent diameters in the sky.

“Having the opportunity to observe an event like this is quite rare,” he said.

“Although there is a lunar eclipse visible from New Zealand every couple of years, on average, being located in the right place to see a celestial peculiarity like a selenelion is much less frequent, and very few people have witnessed one.”

The first record of any such event dated from 1666 - the same year of the Great Fire of London. 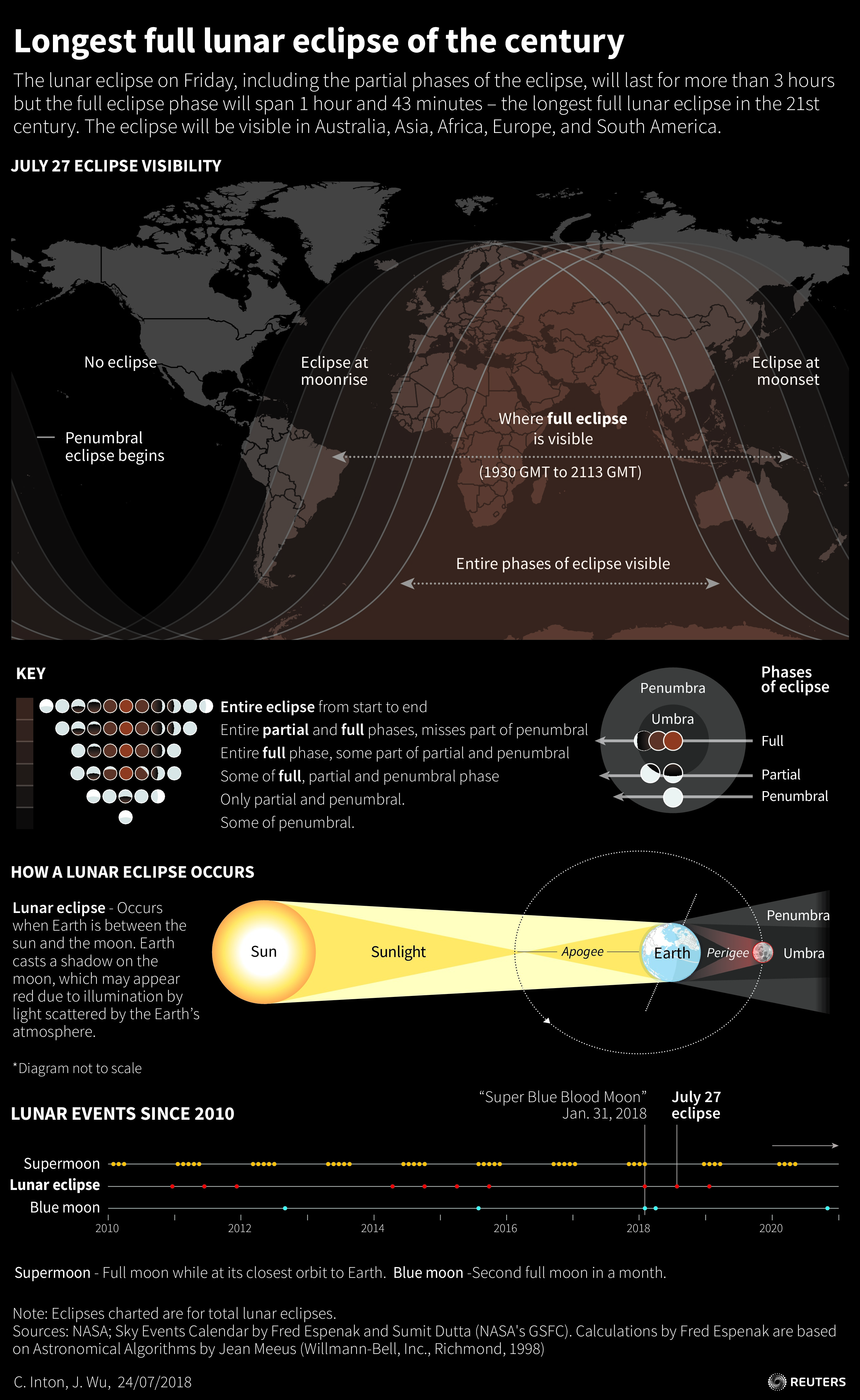 Saturday's lunar eclipse will be the longest of the 21st century to date.

The total eclipse will last 1 hour, 42 minutes and 57 seconds, though a partial eclipse precedes and follows, meaning the moon will spend a total of 3 hours and 54 minutes in the Earth's umbral shadow, according to NASA.

The eclipse will be visible from Europe, Africa and the Middle East between sunset and midnight on July 27 and then between midnight and sunrise on July 28 in much of Asia and Australia.

The same day, Mars will be at its brightest as it travels close to earth, so observers may be able to see what looks like an orange-red star which is in fact the so called red planet.

The next lunar eclipse of such a length is due in 2123.