Spearfisher frees himself from jaws of 2m mako shark 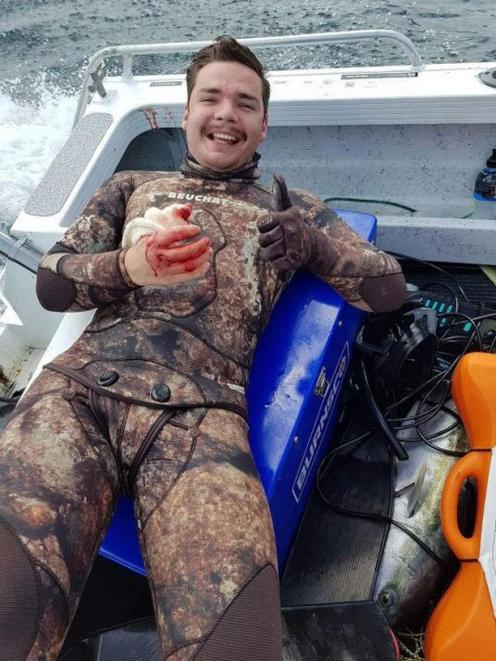 Shark attack victim Kevin Lloyd. Photo: Supplied
Kevin Lloyd freed himself from the jaws of a shark by stabbing it in the head and gouging its eye while his friend grabbed its tail and tried to pull it off.

The 24-year-old Kerikeri man was spearfishing near the Cavalli Islands, in Northland, with friends on Saturday when he was attacked by a 2.1m mako shark about 11am.

He had been in the water for about three hours and had just speared a kingfish when the shark "came out of nowhere" and latched on to his leg.

"I started stabbing it heaps with my knife and it didn’t quite like that so it turned around and bit my hand, and then I was just trying to get my hand out of its mouth, so I gouged its eye with my left hand — this is all while my mate’s holding on to the tail of the shark trying to pull it off me.

"It was pretty lucky because my mate was there. I think it would have been way worse if he wasn’t," he said.

The shark let go of his hand and swam off into the murky water.

"I was stunned. I couldn’t believe it was happening. We dive with sharks all the time but this shark we hadn’t seen," Mr Lloyd said.

Mr Lloyd and his friend swam back to the boat, about 200m away, and applied first aid.

They then picked up another friend who had been dropped off in a different spot and headed to Matauri Bay to meet emergency services.Police confirmed they attended the incident alongside ambulance personnel.

Mr Lloyd was taken to Bay of Islands Hospital, in Kawakawa, where he was treated. The wound on his hand required 10 stitches but because of the nature of his leg wound — and the high chance of infection — it was decided to let it heal over time.

Despite the attack, Mr Lloyd still managed to land the kingfish he had just shot.

"I’m pretty stoked about that. In the whole commotion, my gunline and the fish — the spear was through it — and that was wrapped around me. I started swimming back and it was still there so I grabbed it."

Saturday’s dive was the first time Mr Lloyd had been back in New Zealand waters since he returned from the Pacific Islands with the Navy, where he works in  communications.

He said the attack had not made him more cautious about getting back into the water — in fact, when the Northern Advocate spoke to him yesterday, he said he might head out on the boat for a fish later on.He wanted people to know this was the action of one shark, not all.

"I see sharks quite often. Usually they just leave you alone. This is the first time I’ve genuinely been scared of a shark," he said.

Department of Conservation shark specialist and marine biologist Clinton Duffy said based on the location and the diver’s description it was likely to have been a mako shark.

"They are very common all around Northland, particularly this time of year as the water warms up, and they particularly like offshore islands as well."

Mr Duffy said makos were one of the most aggressive sharks and often attacked competitors.

"They are particularly aggressive, and due to their nature they’ll bite anything they see as a competitor. It is likely it may have perceived the diver as a competitor, rather than food. Due to the murky water there is also a chance the shark mistook the diver for a kingfish."

Unlike other sharks, acting aggressively around mako could trigger them to attack.

"With other sharks, acting aggressively can make them back off, but with mako it can trigger an attack."

"The blood from the fish and vibrations from the spear gun are like dinner bells for sharks.

"You can always expect to find sharks where there are kingfish, too. They feed on the same sort of prey."

Despite their aggressive nature, mako attacks were "very rare", and there had been no fatal attacks in New Zealand, Mr Duffy said.

"As they are an offshore species people don’t tend to come into contact with them. They are not a species swimmers are likely to encounter, unless they are out in the open ocean."