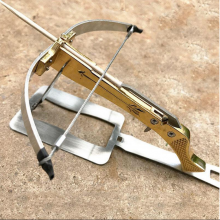 Trademe has approved the sale of mini-crossbows to adults. Photo: Thomas Ladbrook/facebook
A Waiheke Island man selling "toothpick crossbows" is celebrating a reversal of a short-lived ban on the products by TradeMe.

Thomas Ladbrook (30) a landscape gardener who has been on accident compensation since injuring his shoulder a year ago, said he started selling the 10.5cm metal "mini-crossbows" on Friday afternoon "to make a little bit of extra money".

"I started selling them the day after the New Zealand Herald reported the craze," he said.

"I saw the craze and I thought I would jump on it and sell responsibly. That was my goal. I sell to adults."

TradeMe told him at 8.30pm yesterday it had removed his advertisements, saying: "We don't allow the sale of weapons that are intended purely for attack purposes, no matter how cool, collectable or rare these weapons might be."

But this morning the auction site's head of trust and safety Jon Duffy said his team had decided to allow the crossbows to be sold again.

"This is a new product to TradeMe and sometimes we need to take some time to consider if a new product meets our rules," he said.

"The listings we removed were listed responsibly in our 'hunting and shooting' category with clear instructions that they'e R18.

"We'll be monitoring listings of mini crossbows to ensure that they meet this standard and are listed responsibly. Our main concern is to ensure that these listings are not marketed to children and we will not allow them to be sold in any of our children's categories, including toys.

"We take a temperature check from our community to get their feelings on listings and we'll review these listings further if we think it's necessary."

An announcement on the Trade Me website said Trade Me "also allows the sale of conventional hunting crossbows through our hunting and shooting category".

Anxious Kiwi mother Stephenie Wong, who found the toy on TradeMe, yesterday called for them to be banned in New Zealand, fearing someone would be injured.

"It is not a toy, it is a weapon potentially," Wong said in a message to the Herald.

Parents in China asked the Chinese Government to ban the crossbows last week, arguing that they could shoot needles instead of toothpicks and cause serious injuries.

The Shanghai Daily reported that the crossbows were available online and were quickly selling out in Chinese toy shops for 10 yuan to 100 yuan ($2-$20).

"The 'toothpick crossbow' toy has spread across China like wildfire among the nation's primary and middle school children," the newspaper reported.

"The unusual shooting toy may be very small but it is powerful enough to puncture a balloon and pierce cardboard. And when the toothpick is swapped for a metal needle it becomes a dangerous weapon. Tests have revealed that a needle can crack a sheet of glass if it is fired straight at it."

Ladbrook advertised the crossbows on TradeMe for $20, marking them as for sale only to adults aged 18 and over. He received a big response.

"When TradeMe closed down my listing I lost $1000 in three minutes," he said.

Ladbrook is also selling the mini-crossbows on a Facebook site called Mini toothpick crossbow, with the sales pitch: "Trademe banded them get them here now $40 including shipping you get 10 high penetration arrows."

That site also includes the warning: "R18 only ask mum and dad."