Two people are injured after a tornado swept through parts of Christchurch this afternoon.

They would be taken to Christchurch Hospital.

A Fire and Emergency New Zealand spokesperson told RNZ a roof collapsed at a SaveMart in Sydenham due to the tornado.

Both people who injured were inside the building at the time.

There had been multitude of calls following the tornado, with reports of roofs being torn off and air conditioning units falling off buildings.

Hammond Collision and Mechanical employee Brad Anderson witnessed the tornado pick up items in a yard near SaveMart and throw them into the wall.

"It just threw everything around, it was carrying things over top of buildings. At first we were just watching a piece of cardboard getting blown around in a whirlwind. Then it started picking everything up," he said.

Orion spokeswoman Linda McGregor said there are 1128 people without power across Canterbury as a result of the storm's impact on the network.

She said crews were on their way to affected areas at about 2.31pm to assess when power will be turned back on.

There have also been reports of heavy hail across the city.

The tornado also tore past nearby Waltham School causing some of the branches outside the front of the school office to fall down.

Deputy principal Janine Tarawhiti said she first became aware of the tornado when a parent rushed to the school to check if the children were okay.

She said it was fortunate the tornado did not happen during the school’s lunchbreak and the school’s first priority to check all children were safe. 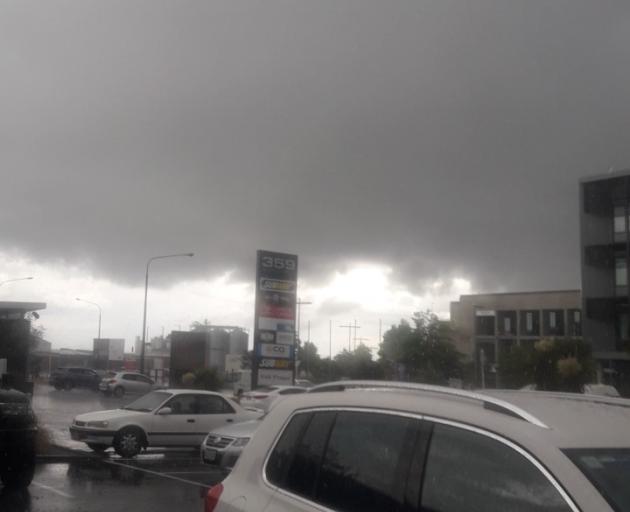 “I think they have taken it in their stride and have been quite excited…one child made a comment: “it must be Christmas because it is snowing outside”. 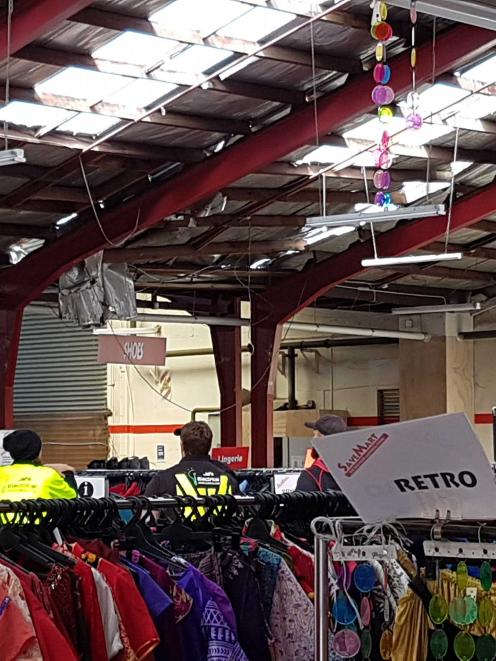 The roof at Savemart where two people were injured. Photo: Supplied via Star News
The children have been allowed to watch the storm from the windows.

A post on the Beckenham Neighbourhood (Christchurch NZ) Facebook group said: "I've just witnessed a big tornado rip through Waltham area, evacuate if you need to.

"It came over ours. Swear I have bruises."

The tornado was accompanied by a heavy hailstorm, thunder and lightning.

The severe weather arrived about 2pm on Monday.

The MetService issued a severe thunderstorm warning, which was lifted just after 2.30pm.

MetService meteorologist Andrew James said the severe weather watch would remain in place until later this evening.
Mr James said at about 1pm Ashburton was experiencing similar extreme weather, and within an hour it moved north to Christchurch.
He said it is likely the weather will move east at about the same rate as it did from Ashburton, and 10-25 mm of rain is expected an hour.
Meanwhile, a house has been hit by lightning near Palmerston this afternoon as wild weather hits large parts of the South Island.

A Fire and Emergency New Zealand spokesman said it received a call at 1.10pm reporting a lightning strike on Palmerston-Hampden Rd.

The strike had blown fuses and blown power points off the wall.

No one was injured in the strike, he said.

One appliance from Palmerston attended.

Another appliance from Waikouaiti was turned around.

Metservice have issued a raft of weather warnings for the South Island today, with heavy rain, thunderstorms and even snow expected.

A severe thunderstorm warning is in place for Christchurch City, with lower warnings in place for North Otago south to Waikouaiti.