Tommy Ward (left) and William Donohue were deported back to the UK. Photo: NZME
Two British men will be booted out of the country after being sentenced for their parts in a roof-fixing fraud, which was linked to the now infamous "unruly" travelling tourists.

The pair, who spent much of their time in New Zealand in custody after their arrests in February, had earlier pleaded guilty to fraud charges.

They were the final two British travellers making their way through New Zealand's courts after the unruly tourists' crimes and behaviour made global headlines earlier this year.

Both men will now be deported back to the United Kingdom after Judge Burns sentenced Ward to seven months' imprisonment and Donohue to six months - much of which has already been served.

The court heard today a provisional booking for a flight had been made for Saturday.

Donohue's lawyer said his client "wishes to apologise to New Zealand as a whole" after what was described as an ill-conceived attempt at a holiday.

After achieving international notoriety, Donohue, who worked as a painter in the UK, has "learnt his lesson" and no longer wishes to be a burden on New Zealand's taxpayers, the court heard.

Both men have paid a reparation sum of $3300 each.

Ward and Donohue arrived in New Zealand on a visitor's visa in mid-January.

Shortly after they met with James Nolan, a 26-year-old British man who had flown into the country during November.

The trio then conspired to target a woman living in Auckland's Farm Cove who needed roof repair work, the Auckland District Court heard earlier this week.

The woman was eventually defrauded of $10,000, while the con-artists left the unfinished worksite and the roof in a state of disrepair, the court heard.

Later, Ward and Donohue travelled to Hamilton to continue the roofing ruse with another British man, 59-year-old James Quinn.

However, the woman targeted grew suspicious of the men, having reading articles about a travelling group of roofing scammers making their way down the country.

She called the police while the three men fled - leaving two holes in the eaves of her roof and the hired tools strewn across her property.

After police made public pleas to help find the travelling fraudsters, Ward and Donohue were arrested in Lower Hutt, where Ward committed another offence by stealing a passport.

Quinn was arrested at Christchurch Airport in April.

Nolan was also caught, but despite being before New Zealand's courts he was able to flee the country in January after being granted bail on fraud, assault and driving charges.

Police still have active warrants out for his arrest and allege Nolan was able to flee by using a passport belonging to a fellow member of the unruly tourists, James Doyle.

Doyle, 29, was arrested alongside Quinn at Christchurch Airport trying to leave New Zealand on his brother's passport and pleaded guilty last week.

As a result of the Nolan's escape, Minister of Customs Hon Kris Faafoi said Customs has changed its processes to now always conduct face-to-face checks when eGates reject a passenger.

Two other British men, Johnny Quinn, 30, and Patrick Quinn, 27, were also sentenced and deported for their roles in a roof-fixing scam two weeks earlier.

The brothers defrauded Auckland residents of $32,550, including a Remuera homeowner who lost $18,000 in cash and had their chimney partially dismantled. 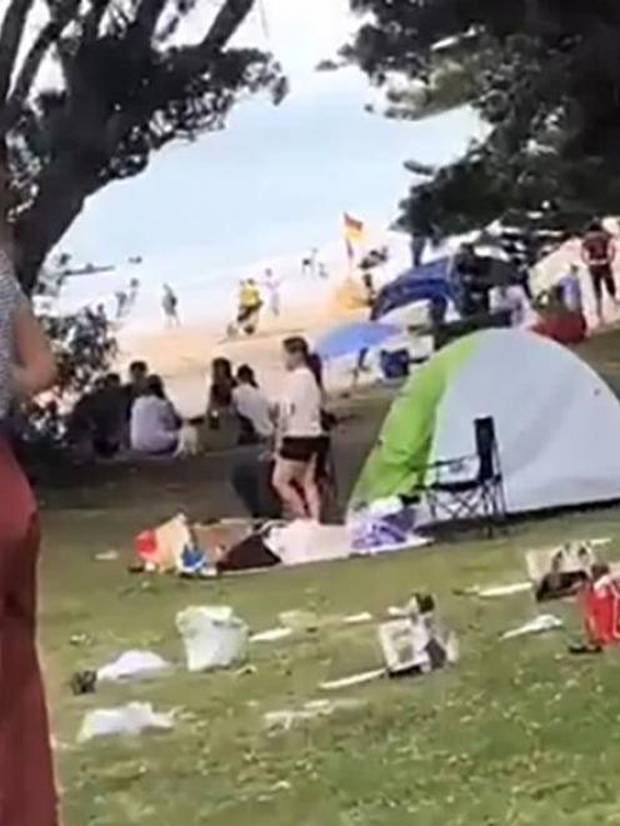 The summer saga began on a sunny day at Takapuna Beach. Photo: Supplied
The court heard at the Quinns' sentencing that the scheme is believed to have been instigated by Nolan.

The unruly tourists first hit the headlines during the summer after a video emerged of them littering a waterfront lawn area of Takapuna Beach.

A young British boy was filmed threatening to "knock your brains out" if challenged by concerned locals.

Allegations followed the group around New Zealand as they were accused of also attempting to rip-off several restaurants and motels.

At the height of their notoriety Auckland Mayor Phil Goff labelled them "a bunch of a***holes".