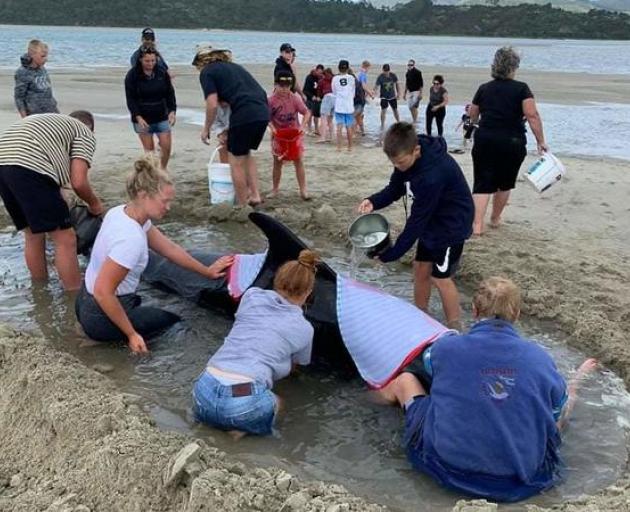 Refloated at high tide this afternoon, they were in a pod of 11 that stranded this morning at Matarangi Spit, north of Whangamata.

Four that died, including a calf, are being buried above the high-tide mark.

"The surviving pilot whales have been successfully refloated and shepherded over the bar and out of the harbour at Matarangi," Project Jonah said in a Facebook update.

"In a co-ordinated effort, the whales were refloated together and then several boats shepherded the whales out of the harbour. A brilliant effort from all involved."

It said the four dead whales have been blessed by local iwi and samples and measurements were taken before they were buried.

Earlier, more than 1000 people flocked to the beach to help with the rescue. Many carried blankets and buckets.

Project Jonah called on any trained medics on holiday in Matarangi, north Coromandel to help them.

"While the locals are doing a great job, if you are a trained medic on holiday in the region, your help would be greatly appreciated," its Facebook post read.

In a later post it said the response from the public had been "overwhelming", however, they were urging the public to stay away.

Project Jonah general manager Darren Grover said the whales would need to be refloated all at the same time.

"If we were to take one animal and re-float it, it would simply turn around and return to its remaining family on the beach. So we do all that in one go, in one effort.

"DOC are now on the scene, we have trained volunteers, members of the public, and my senior team are on route to the beach.

"It's windy and overcast at the beach so anyone who might be going down, be prepared for that. Be self-sufficient with food and water warm clothing and if you do want to help with the re-float then it's strongly advised that you wear a wetsuit."

However, DOC said there were already enough people to help out at the scene.

Mr Grover has asked that people do not allow children to get too close to the whales because it could be unsafe. Small dogs should also be kept away because they can unsettle the whales.

He said it had been at least four years since the area last had a whale stranding.