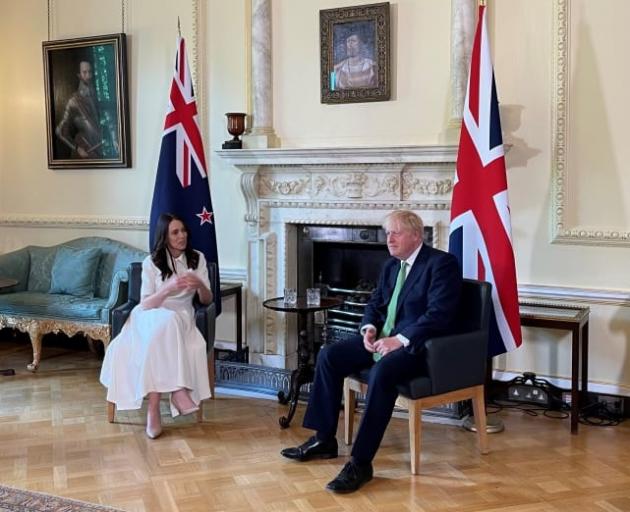 During the meeting, they agreed to changes to the Youth Mobility Scheme, which currently allows people aged between 18 and 30 to live and work in the UK for up to two years.

The countries had agreed in October last year to improve the scheme.

The changes  mean young New Zealanders will now be able to spend three years in the UK. The age limit for eligibility for the visa will also rise to 35 years.

The changes to the scheme, however, will not be introduced immediately. Both countries have committed to introducing them no later than 2024.

Ardern said the changes "reflect the depth of the NZ-UK relationship".

The UK will continue to limit the number of spaces available to New Zealanders. The current quota for 2022 is 13,000 places.

New Zealand will introduce an annual cap of 15,000 places for UK nationals applying to the Working Holiday scheme.

Ardern and Johnson signed a new arrangement intended to strengthen engagement between New Zealand and the UK on research, science and innovation related policies.

The arrangement will be led by the Ministry of Business, Innovation and Employment and the UK Department of Business, Energy and Industrial Strategy.

Officials will be able to share priorities and review existing scientific collaboration under the agreement.

"Our new research, science, and innovation arrangement will enable us to explore further opportunities to work together on some of the biggest science and innovation challenges facing the world today," Ardern said.

New Zealand and the UK also made a commitment to ratify a free trade deal as soon as possible.

A free trade deal was signed with the UK in February.

Prime Minister Jacinda Ardern said she was not aware of any issues around it being ratified, but it was a matter of the deal going through its legislative processes in both countries.

The legislative bill for the UK free trade agreement has been introduced to parliament but is yet to have its first reading.

The prime ministers also discussed the significant challenges and opportunities facing the world today, and how the UK and New Zealand can jointly respond. To give leadership to these efforts, they agreed to establish an annual Foreign Ministers Dialogue.