The Coalition's first Budget has delivered a big boost for public services including $3.2 billion extra for health services over four years - and a large-scale state house building programme. 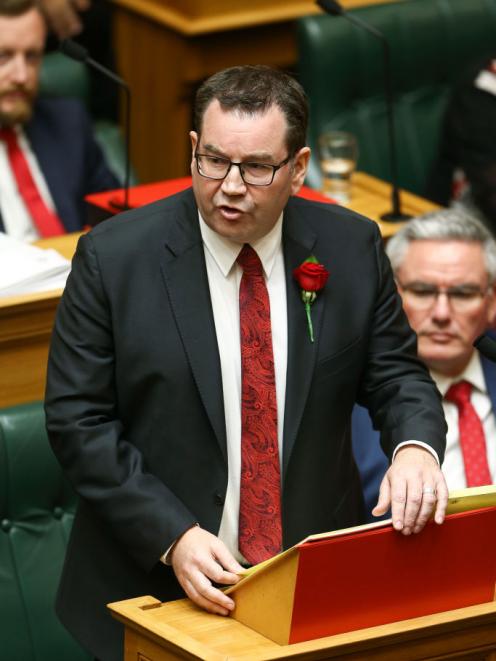 Finance Minister Grant Robertson delivers the 2018 budget at Parliament in Wellington. Photo: Getty
Spending on Corrections goes over $1 billion for the first time and it gets funding for pop-up prison units to house an extra 600 prisoners.

And an extra $1.6 billion for education will go to early childhood education and a boost for students with higher learning needs.

• Health: $3.2 billion injection over four years, including $2.2b more for DHBs and $126m for elective surgeries and other areas. $750m for hospital upgrades and rebuilds.
• Cheaper doctor visits for more than 500,000 people. Free GP visits extended to 13-year-olds (56,000 more children). About 540,000 people eligible for Community Services cards will get $20 to $30 cheaper GP visits. Cost $385m.
• Midwives: $112m more for community midwives, including 8.9 per cent fee increase to level them with DHB midwives.

But health is the biggest winner, with the Government saying the system was starved of funding under the last administration.

Finance Minister Grant Robertson said public services had been underfunded for too long.

"Budget 2018 begins the economic and social transformation that must happen if New Zealanders are to have better lives in the decades to come."

It was the largest injection into the health sector for a decade, he said.

As well as the $3.2 billion new operating funding for health, there would be an additional $750 million for capital spending, which compared to $150 million in the last National Government's Budget.

Free doctor visits will be extended a year from under 13s to under 14-year-olds and community card holders will get cheaper visits.

Community midwives will get an 8.9 per cent boost in their fees but Robertson was adamant that that should not be taken as a signal for other state sector pay negotiations.

It was special case to address an inequity with hospital-based midwives.
An extra 6400 state houses will be built over four years.

But the Green Party's $100 million green investment fund, negotiated in the confidence and supply agreement, was confirmed in this Budget.

The amount of new operating money Robertson had to allocate for this year's Budget increased from $2.6 billion to $2.8 billion because of extra tax revenue – and increased over four years from $21 billion over four year to $24 billion.

New capital allocations increased from $3.4 billion to $3.8 billion. Allowances for future years of expenditure have been adjusted upwards as well.

Treasury forecasts economic growth to average 3 per cent a year over five year, up marginally.

Real wages are forecast to grow each year with annual average earnings rising to $71,000 by 2022.

Among the Budget documents is breakdown of how the Government's extra spending has been funded: 38 per cent from adopting a slower debt track than National; 33 per cent from reversing National's tax cuts; 23 per cent from extra revenue from growth in the economy; and 6 per cent from cutting previous programmes and greater compliance on tax collection.

Robertson has also announced that consultations will begin soon on Independent Fiscal Institution, which was part of Labour and the Greens' Fiscal Responsibility Rules.

Among their tasks would be to independently cost political promises during an election year. Australia, Canada and Britain had similar institutions.

It had promised no new taxes, but had introduced regional fuel taxes, an extension to the bright line test, and excise taxes, National's leader said.

"More than $2b more in tax over the next four years, whereas we were giving New Zealanders … tax relief," Bridges said.

Of the $40b in spending over four years, the Government was spending close to $1b on foreign affairs.

He repeated his line that the Government was spending on "diplomats not doctors" - though most of that $1b will go towards foreign aid in the Pacific.

Ardern said she was proud of today's Budget and had heard a number of names to describe it, including the "spray and walk away budget''.

She acknowledged she did not take offence to that, however, as she remembered it was a mould and algae remover.

Ardern said no decision in the Budget was taken lightly. Every dollar spent was considered, prioritised and balanced.

She said National should not be lecturing the Government on debt, having borrowed $50b while in power.

Claims that Labour was spending less on health was false, she said. National had factored in the $1.5b pay equity settlement in its funding, which was "not comparing apples and apples", she said.

"I am happy to debate this Budget, but let's debate the facts not Facebook memes," she said.

This commentary about underfunding comes from a party who for nearly a decade were seen as clowns and jokes.