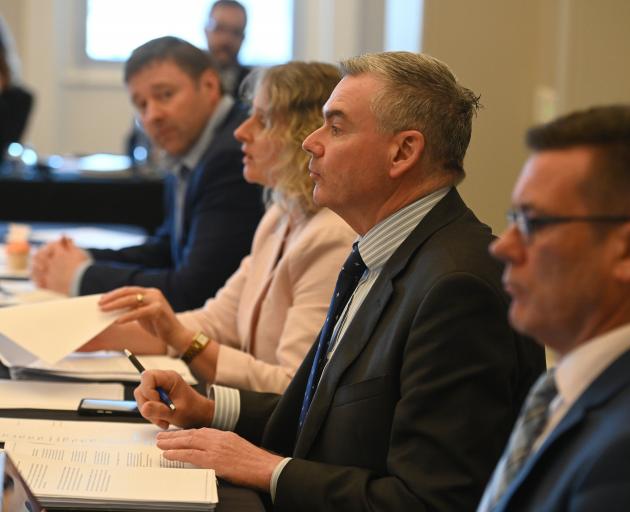 MPs (from left) Mark Patterson, Dr Liz Craig, Scott Simpson and Michael Woodhouse take part in last month’s Carbon Zero Bill Conference in the Dunedin Centre.PHOTO: LINDA ROBERTSON
As any MP will tell you, you only have to say one word on, say, 1080 or water fluoridation and your email inbox will clog up within minutes.

Climate change is another one of those push-button issues where vested interests are ready and waiting to litigate the point.

Two local MPs know this better than most at the moment.

Even the first step in understanding this Bill underlines its inherent controversy: its 14 proposed clauses come with a 4700 word-long explanatory statement.

Fourteen clauses sounds straightforward enough, but given clause 5 runs from 5(A) to 5(ZW) it's not quite that simple.

None of which impresses some opponents of the Bill, whose arguments range from disputing that climate change exists at all, to asserting that if it does exist it is not as bad as all that.

There has already been fall-out for New Zealand First on this point, with Clutha Southland electorate branch chairman Basil Walker resigning, in no small part because of his and Mr Patterson's respective positions on climate change and global warming. 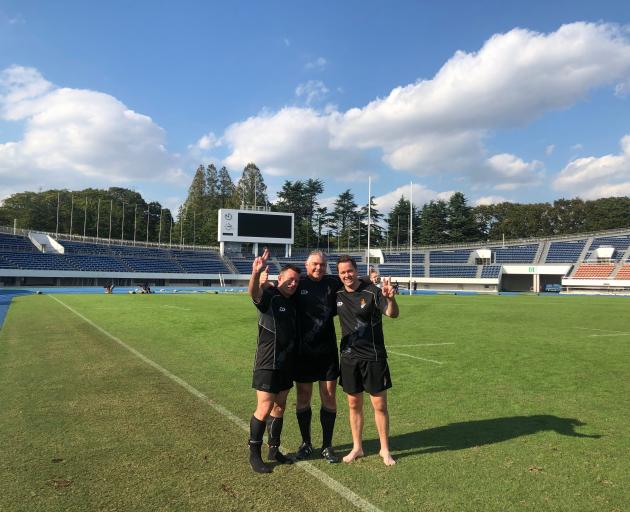 Michael Woodhouse and Hamish Walker flank co-captain Mark Mitchell; the two southern MPs played leading roles in the ‘‘Parly Blacks’’ Parliamentary Rugby World Cup triumph in Japan this week. After beating Ireland and France, New Zealand toppled Australia 15-10 in a tense final which went to extra time. PHOTO: SUPPLIED
Of course, it is perfectly possible to believe in climate change but still oppose the Bill's provisions ... and it is this potential middle ground which both Dr Craig and Mr Patterson hope to assuage.

Mr Patterson, who is sharing time on the committee with NZ First colleague Jenny Marcroft and who has chaired some of its sessions, firmly believes there is room for manoeuvre on emissions targets and timelines.

As his party's primary industries spokesman he will be keen to position NZ First as the party which strikes a reasonable compromise between the ambitions of environmentalists and the realities farmers like himself face.

Farmers want to "do the right thing" he says, it's just a matter of how much right and with how much rapidity.

Dr Craig's electorate straddles town and country, and this is an issue that divides at that level.

Age has been another driver in submissions she has received, with many secondary school climate strikers now grappling with Parliamentary process for the first time as they attempt to demonstrate their marches were striving for change rather than a mass skive-off.

While not wishing to dissipate that youthful enthusiasm, Dr Craig is also well aware that farmers need time to reposition themselves as producers of sustainable food.

"We need take this seriously, and take the time to get this right." 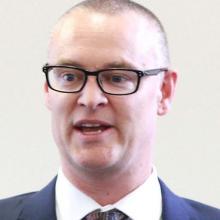 Not to play down the vital issues of rising sea levels, quality of housing stock and flood threats which Dr Clark raised, there was an ulterior motive for his posing Mr Twyford several questions, and the Minister's voluminous answer.

The Order Paper - the list of pending legislation - is a slender document just now, and Government MPs are not at all keen to race through it.

National, on the other hand, wants to go at a cracking pace and embarrass the Government for having no Bills to place before Parliament.

Hence, part two of the committee stage saw 17 Government speeches and just two from National MPs ... both of which were: "I move that the question be now put."

Speaking of Dr Clark, in his speech during Tuesday's first reading of the Public Finance (Wellbeing) Amendment Bill, he found a phrase he liked and was going to sink his teeth into it.

Early on he claimed the Government "can walk and chew gum at the same time" and, chuffed at the polite chuckles he received, said it again a couple of minutes later.

Just to make sure, he then added "maybe walking and chewing gum is more productive than just walking alone - if we want to continue the metaphor a bit further, but maybe that's stretching it a bit far, if I can step into bad puns as well."

Probably best to spit that piece of gum out right now.

A big moment for Mr Patterson on Thursday, who at Question Time got to ask the Prime Minister if he stood by the Government's policies and actions?

With Jacinda Ardern out of the country, it fell to Acting Prime Minister Winston Peters to answer on her behalf.

After first noting "how refreshing it is to have someone to finally hold this Government to account," the New Zealand First leader and his junior MP then indulged themselves with a far from modest account of the Government's achievements.

-This article is part of the Otago Daily Times' contribution to Covering Climate Now , an international campaign by more than 170 media organisations to draw attention to the issue of climate change ahead of a United Nations summit on September 23. To read more of our coverage go to odt.co.nz/climate