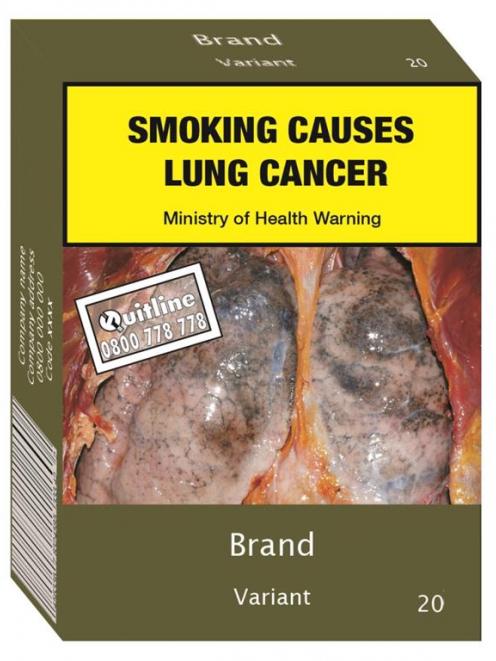 A design shows how cigarette packages could look when plain packaging is introduced. IMAGE: MINISTRY OF HEALTH
The Government is urged to be more radical when it considers the design and regulation of plain packages for cigarettes.

A submission by University of Otago researchers, which includes input from colleagues at Auckland University, says New Zealand has an opportunity to "develop unique regulations that set a new standard''.

The Smoke-free Environments (Tobacco Plain Packaging) Amendment Bill to introduce plain packaging passed its second reading in Parliament in June. A Ministry of Health consultation process on the regulatory requirements of plain packaging closed on Friday, with 63 submissions.

The researchers' submission, whose lead author is Janet Hoek, of Otago University, suggests stronger restrictions on brand information on packs.

The researchers also want the cigarettes to be brown from top to bottom.

"White cigarette sticks create connotations of purity and cleanliness that are the antithesis of diseases caused directly by smoking and perpetuate myths that smoking is not as harmful as health authorities suggest.

"Our research shows it is possible to greatly reduce the attractiveness of cigarettes and the likelihood they would be chosen by changing the stick appearance and colour.''

The researchers want a set length and diameter of all cigarettes to eliminate variation among brands.

"We do not believe our suggestions will substantially increase the risk of litigation or World Trade Organisation challenge.''

The researchers also called for tougher rules for roll-your-own tobacco.

"We recommend that sales of roll-your-own tobacco in soft plastic should not be allowed; instead, we suggest making rigid containers of prescribed dimensions mandatory for all tobacco products.''

The submission calls for the country of manufacture to be excluded.

"There is strong evidence that country of manufacture, or origin, information communicates marketing appeals to consumers.''

The researchers suggested a revamp of the health warnings on the packs.

"We recommend that warnings include themes such as . . . the social unattractiveness of smoking, tobacco industry denormalisation, and the effects of second-hand smoke on children and companion animals.''

A ministry spokeswoman said the ministry would review the submissions and report back to the Government by the end of the year.