Leadership change matter of what was best for Act, NZ 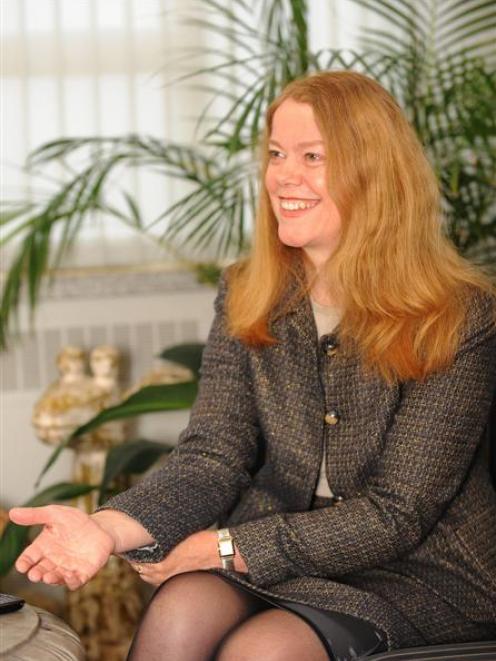 Hilary Calvert: "There was a perceived gap in what we should be doing." Photo by Peter McIntosh.
A growing perception that Act New Zealand was not achieving its aims started to worry some of the MPs who had so far relied on Rodney Hide holding Epsom to keep their seats in Parliament.

Dunedin-based list MP Hilary Calvert said that, at the same time, there was also a growing sense in caucus that this was Act's year as voters became disillusioned with National for not living up to its 2008 election promises.

"We had a good story to tell but somehow we were not capitalising on it. We were quietly confident we were doing what people wanted us to do."

Both Mr Hide and Mr Boscawen were excited by the possibilities of having Dr Brash on board and were discussing roles with him, right up to co-leader, Ms Calvert told the Otago Daily Times.

In the end, Dr Brash did not think co-leadership would work and he had already been approached by people wanting to form a right-wing political party - with him as leader - to contest the election. Ms Calvert believed there were three "definite" parties in the process of being formed at the time Dr Brash was talking to Mr Hide.

One was affiliated with the Reform Party, in Christchurch, one group was from Auckland and another was forming around opposing the foreshore and seabed legislation.

"In the back of my mind it was concerning me, not just because of some party going toe-to-toe with us. It suggested to me that Act was not doing at least some of the right-wing things people thought we should be doing. There was a perceived gap in what we should be doing."

People had voted for a change of government in 2008 with Prime Minister John Key as the leader of that government. But they had become disillusioned, she said.

Dr Brash then indicated publicly that he would contemplate being involved with Act but only as its leader.

Dr Brash considered he could not change enough of the direction and vision unless he was the leader. There was also the possibility that any new party led by Dr Brash would stand former National Party MP and former Auckland mayor John Banks in Epsom against Mr Hide.

If that had happened, along with the perception that Act was not achieving, the party would have been gone from Parliament, Ms Calvert said.

Asked how tough it was personally to change from supporting Mr Hide as leader to moving across to support Dr Brash, Ms Calvert said that was easier and much more straightforward than things that had gone before.

Act was a party founded on principles and policies. It had looked more personality-driven with Mr Hide winning Epsom and taking MPs into Parliament on the back of his win.

Ms Calvert said she found it easy to focus on the principles of what was best for Act and best for the country. That meant Dr Brash was the best person to lead Act into the election.

"I said to Don that I was happy to fulfil any role he had in mind for me. This is too important for Act for me to say I will vote for you if you give me this position. And I am not a `swap-a-vote-for-a-position' type of person."

Normally, Act would never have changed its leader at this point in the electoral cycle, she said. But it was the right thing to do.

As the Act whip, Ms Calvert and Mr Boscawen, the Parliamentary leader of Act, would meet National MPs and officials and talk about the legislative programme.

Agreements already in place for supporting legislation would be reconsidered in light of the changes although the party would assure National it was a "reliable friend". That did not mean Act would hesitate in telling National that it had gone astray, on occasions, Ms Calvert said.

Act members were not whipped and voted on their individual consciences, although issues were thrashed out in caucus before voting numbers were decided.

"This is a rejuvenating time for Act between now and the election. We are choosing the Epsom candidate soon and other people are coming out of the woodwork and making inquiries."

People were prepared to stand for Act on the list as there was a better chance of entering Parliament when two months ago there was no point in being No 7 on the list, she said.