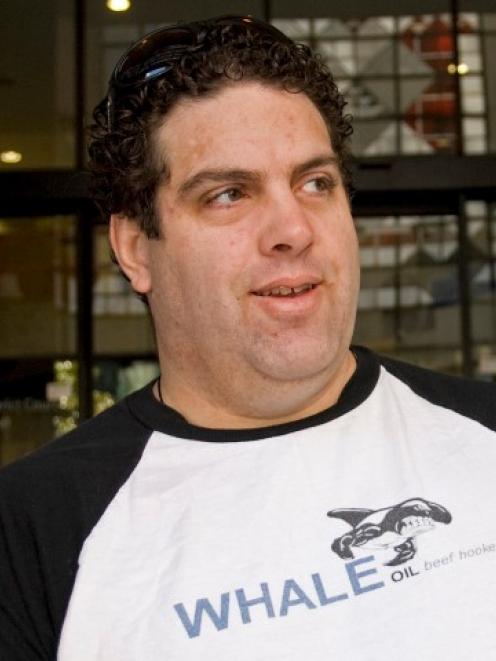 The book is based on thousands of emails between Slater and National Party members, including Justice Minister Judith Collins.

Slater, who was speaking from Israel, told TV3's The Nation today that he had received "a torrent" of death threats as a result of the book.

"People have said 'You suffer a mental illness, you should throw yourself off a balcony, you should suicide - don't even write a note, no-one would read it', all those sorts of things."

He believed Hager would not take responsibility for those threats.

Hager told the programme he was sorry that Slater had received death threats.

"If people have said rude things, then they should stop it."

Among the book's allegations were that Ms Collins fed information she gained as a Cabinet minister to Slater to use in political attacks published on Whale Oil.

That included that she fed the identity of Internal Affairs official Simon Pleasants, who she believed was responsible for leaking information to the Labour Party about Finance Minister Bill English's taxpayer-funded accommodation allowance in 2009.

Slater went on to identify Mr Pleasants in a series of disparaging blog posts on his Whale Oil site leading to a torrent of abuse directed towards him.

Slater told The Nation that he was not sure the information from Ms Collins could be considered a leak.

"We certainly had a discussion about a name of a person, from what I understand, around that."

He said he could not remember enough about the incident to put the email from Ms Collins into context.

"Frankly I can't even remember the details of the post."

Death threats targeted at Mr Pleasants and his family were posted by readers on Slater's site after the his blog posts were published.

Neither he nor Ms Collins could be tarred by the actions of "anonymous commenters", Slater said.

Ms Collins yesterday confirmed she had given Mr Pleasants' name to Slater. "What I was asked for was the name and the title of the guy and that's publicly available and I've simply given him that," she told NewstalkZB

Mr Pleasants, who is still employed by the Department of Internal Affairs, told the Weekend Herald he did not believe he had been fingered as a suspect over the leaks before Slater's posts.

"I did not leak the information. I have never leaked anything," he said.

Hager told The Nation the outing of Mr Pleasants' name was what had most offended him.

"I believe, and she hasn't denied this, that as Minister of Police she leaked the name of someone she thought could be blamed and watched him being persecuted in public without a chance to defend himself."

Labour MP Grant Robertson said Ms Collins' admission that she had given Mr Pleasants' name to Slater was more than enough reason for Prime Minister John Key to sack her as a Minister.

"Despite claiming that the evidence about her in Nicky Hager's book was 'false' Judith Collins has now been forced to admit that she did send information about a Ministerial Services staff member to Cameron Slater for him to use in a baseless smear campaign," he said.