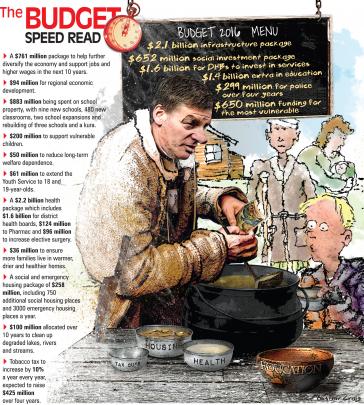 Finance Minister Bill English has every reason to feel pleased with himself after delivering Budget 2016.

He continued treading the fine line of spending just enough for the Government to claim it was providing help for the most vulnerable in society while keeping to his mantra of surpluses and debt reduction.

Criticism from Opposition parties was this year much stronger than for the previous seven Budgets announced by Mr English, probably as a result of where New Zealand is in the electoral cycle.

The Green Party was the harshest in its criticism of help provided to New Zealand's poorest people and Labour used the lack of help to solve the country's housing shortage as its main point of attack.

New Zealand First leader Winston Peters said it was a "Get stuffed Budget'', indicating he believed the Government did not care about Kiwis.

Prime Minister John Key defended the Budget, saying there was record investment in health and education and more support for businesses to create jobs on the back of a growing economy.

The Government did its part for job creation, announcing a substantial infrastructure package focused on transport, schools and the investment needed to deliver a modern, flexible tax system.

"Our eighth Budget shows rising surpluses and falling debt, with the economy forecast to grow at 2.8% over the next five years on average through to 2020.''

Economists expressed their doubt about the reliability of the forecasts included in the Budget with most believing economic growth would not reach anywhere near the levels predicted by the Treasury.

Health also received a substantial boost, in response to growing calls for more funding as the ageing population and higher immigration put pressure on services.

No separate announcement was made on the fate of Dunedin Hospital's rebuild or renovation, despite district health boards getting a boost of $1.6 billion over four years.

The South did get some crumbs, with extra funding for bowel cancer screening and research money for the University of Otago.

A programme administered by the Otago Chamber of Commerce got some money, along with cash to tackle wilding pines and Tb.

Mr English said Budgets were not just an accounting exercise.

They were about achieving better results for New Zealanders and their families from almost $180billion of existing spending.

"And they are about ensuring any new spending is directed to where it will make a real difference. The Government has done that in areas ranging from schools to child health to reducing crime and to supporting new jobs.''

Although Mr English continues to focus on debt reduction as the Crown accounts return to surplus, he has allowed himself some wriggle room to introduce tax cuts as early as next year.

Business interests were well satisfied with the Budget, because it provided no lurches to the right or the left.

"The Reserve Bank governor will be kept awake at night. With the economy being driven by population growth, the inadequate announcements in infrastructure spending ignores Graeme Wheeler's plea for more economic legwork from the Government.''

However, as the debate continues to rage in Parliament about the Budget, Mr English will go on quietly with his plan of getting National re-elected for a fourth consecutive term in the knowledge he has squirrelled away cash to pay for election promises next year.