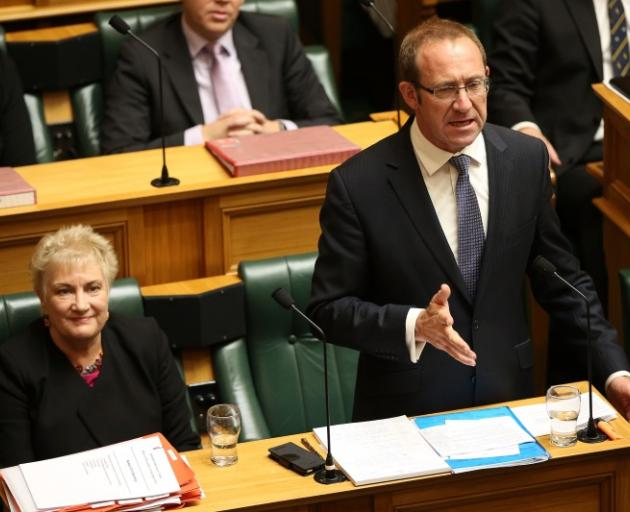 Labour leader Andrew Little says the Government has no long-term strategy to the real problems being faced by New Zealanders, after eight years in power.

Mr Little was responding after Finance Minister delivered his Budget in the House this afternoon.

He was most focused on what he said were a lack of measures to address housing affordability, and stressed that National had eight years to come up with a plan.

Today's Budget was "scratched out, patchwork", that was designed to look like an economic strategy.

"And it's not, it doesn't go anywhere near it ... in this Budget, Bill English's eighth, they have failed."

Mr Little said the Government's approach to economic management was akin to a fair, where "candy floss" and "a few trinkets" were handed out. The spending items in the Budget were like those to be won in a quick-fire raffle, he said: "When you get home and find it's past its use by date".

The Labour leader said the Government was out of touch, citing the Prime Minister not calling the housing situation a crisis.

He said this Budget did nothing to help moderate rising house prices, and home affordability.

"On housing, nothing in the Budget today will hardly make a difference to the real problems faced in the housing sector.

"And they wonder why we have people now living in cars and garages around Auckland ... none of the measures in this Budget will lift home ownership rates in Auckland ... it will not solve the crisis."

Mr Little acknowledged the extra spending in health, but said it was still not enough to help the health system keep up with rising real costs: "More New Zealanders will wind up in greater pain for a lot longer."

The stark reality of the education measures was that operational funding for schools was frozen, and that would mean parents would pay more in school donations, Mr Little said.

Labour would stand up for middle New Zealand. It would diversify the economy, Mr Little said, and would invest in infrastructure properly, and in skills and training, including three years' free tertiary education or training.

"Labour's ideas will kick start the economy and it will deliver more for everyone."

In housing there would be one guiding principle, and that was to build more houses, the Labour leader said, to applause from his colleagues.

"Here's my message - this Government isn't delivering for you, but Labour will … Labour is ready to serve," he concluded.

"This government is the political equivalent of Milli Vanilli - lip synching when they should be leading.''

He questioned what Prime Minister John Key's legacy would be.

"it will be remembered for record number of homeless peoplefor the biggest decline in home ownership ever. Two thirds of our rivers not safe to swim inafter eight years and eight budgets National has squandered the opportunities to create a meaningful legacy.''

The Greens had hoped for measures to fix the country's housing crisis, move the economy to a low carbon model, and protect New Zealand's natural heritage, but had been let down on all three, Mr Shaw said.

"What this Budget shows is that John Key and his ministers have no interest in leaving a transformational legacy for New Zealandwe need more than a few new toilet blocks and more plaster for the cracks that are becoming so painfully obvious.''

New Zealand First leader Winston Peters said there was only one way to describe today's measures - "the get stuffed Budget''.

That was the message to first home buyers, people living on the streets, young families worried about the future, students concerned about debt and future jobs, and regional New Zealand including farmers worried about the bank manager's call, Mr Peters said.

"Now the PM may sleep like a baby. But hundreds of thousands of New Zealanders can't.''

The New Zealand First leader held up a chart showing home ownership by income decile. Heckled by National MP David Bennett that he was holding the paper upside down, Mr Peters didn't miss a beat.

"You are exactly right. What ought to be up is downand Mr Bennett, when we gain power, we are going to put it the right way up.''

Why should people who have lived in Auckland for generations "make way for an immigrant", Mr Peters asked. NZ First was the only party with the courage to attack the country's "mass immigration'' policy, he said.

"There is an elephant that is so big in the room that nobody else can get init is putting enormous costs on New Zealand and impacting every government servicethe rest of New Zealand is missing out.''