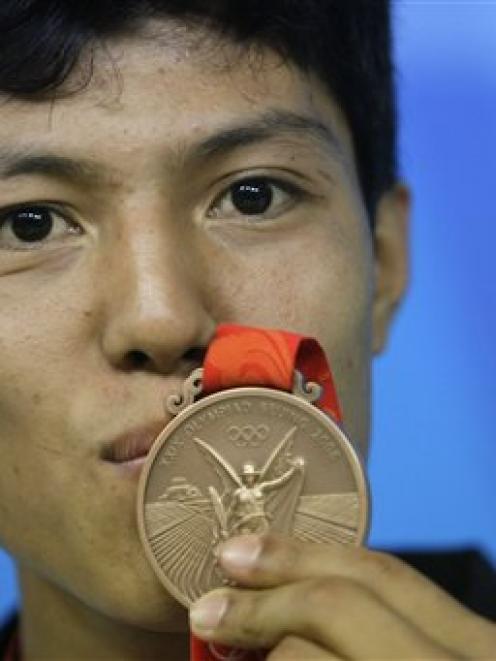 Then he watched his country win its first-ever Olympic medal.

Rohullah Nikpai defeated world champion Juan Antonio Ramos of Spain on Wednesday to earn the bronze medal in the men's under 58-kilogram taekwondo competition, sparking applause, wide smiles and laughter in homes, restaurants and ice cream parlors around the country.

"When I saw that he won, I jumped up and hugged and kissed my son," Gayezabi said. "I was crying."

"I hope this will send a message of peace to my country after 30 years of war," Nikpai said.

The victory led all of Afghanistan's evening newscasts.

"I am so happy. I cannot express my feelings in words," said Mohammad Akbar, 33, who watched on a TV at his Kabul pharmacy. "While I was watching the match I was clapping I was so happy."

Nikpai, who is 21, started learning the Korean martial art when he was 10 because his brother had found a club in Kabul to train. Not only was it an escape from the daily rigors of life in a country that not been at peace since the 1970s, he turned out to be good at it.

When Gayezabi met Nikpai, they were both living at a refugee camp in Iran during the years of war that embroiled Afghanistan in the 1980s and 1990s. The two competed together on a refugee taekwondo team.

Nikpai came to Kabul four years ago, Gayezabi said. In the mornings he lifted weights and in the evenings he practiced martial arts. In between he earned money cutting hair as a barber.

With success came better training conditions. After being selected for the national team six months ago, he was able to use a special gymnasium.

But in a country where sports take a distant place behind the realities of war, few resources are dedicated to training athletes.

"My training situation is a lot like the situation in my country," Nikpai said. "It's not good."

Gayezabi had a lucky few hours of electricity that allowed him to watch his former teammate's victory. He feared he would only be able to listen on the radio since Kabul averages about four hours of municipal electricity a day.

"I was crying because I was remembering back when we were both on the Afghan refugee taekwondo team in Iran," Gayezabi said.

Only four Afghan athletes came to Beijing, representing a country that had never won an Olympic medal and is sinking ever deeper into war as the Taliban insurgency escalates.

Sprinter Robina Muqimyar - who in 2004 broke the gender barrier on the Afghan Olympic team - was last in a field of 85 women in the 100 meters, with a time of 14.80. She ran with a scarf covering her head.

Teammate Massoud Azizi finished 76th in the men's 100. He trains in Kabul's National Stadium, where the Taliban once staged regular public executions, wearing jogging shoes because his spikes won't dig into the track's cracked, concrete surface.

But Nikpai, who is 21, has claimed a spot among his sport's elite.

Afghanistan will get another chance at a medal in taekwondo. Nesar Ahmad Bahave is competing in a heavier weight class.

Hussein Rachmati, a taekwondo teacher who works in the gym where Nikpai trains, said Nikpai prepared for the Olympics with a Korean teacher. He placed second in the World Taekwondo Federation's qualifying event in Vietnam last year.

Afghans gathered around an ice cream shop TV in Kabul broke out in wide smiles and passed around congratulations to one another after watching Nikpai's win, said Abdul Wafi, a 28-year-old university student.

"It is wonderful that an Afghan athlete can win a medal in the world Olympics," said Wafi. "It is a great achievement for Afghanistan."

The top U.N. official in Afghanistan, Kai Eide, said the Olympic win shows that Afghanistan can compete on the global stage against the world's best athletes.

"Young people should draw hope and inspiration from this Olympic win," Eide said in a statement. "Today, Afghanistan has demonstrated that it can and will succeed in the face of adversity with the determination, commitment and hard work of its most precious resource - the young people of Afghanistan."

Along with the president's offer of a house, Nikpai's bronze medal comes with a cash prize.

Ehsanullah Bayat, chairman of the Afghan Wireless Communication Company, earlier announced that he would award any Afghan athlete who won an Olympic bronze $10,000, along with $50,000 for a gold medal and $25,000 for a silver, said Khalid Andisha, a spokesman for AWCC.

"It is a great victory for Afghanistan," said Mohammad Sukran, an 18-year-old student. "In a country like Afghanistan, the only thing we hear about all the time is violence and fighting. This is finally good news for Afghanistan."