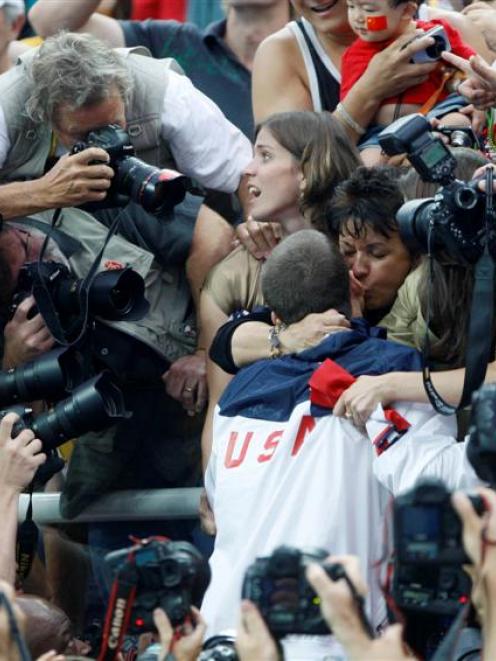 Photographers surround Michael and Debbie Phelps, centre, and his sister Whitney Flickinger, after the medal ceremony for the men's 4x100-metre medley relay final on Sunday. Photo by Mark Baker/AP.
Debbie Phelps sat in a luxury hotel suite with a view of the Manhattan skyline on Wednesday, a parade of TV cameras passing through to interview her.

A day earlier, she shot a commercial that will air during the closing ceremonies of the Olympics. She is almost as recognisable to American viewers as her record-setting son, the many close-ups during Michael Phelps' races making her the face of every parent. The nerves, the pride, the joy.

But today, Debbie Phelps planned to return to a very different setting and a very different audience. She is the principal of Windsor Mill Middle School in Baltimore, and she needs to run two staff meetings and a leadership meeting.

On Monday, her more than 600 students return to school.

"It's going to be a huge change," Debbie said.

From watching your son swim to Olympic gold in Beijing with the president to overseeing middle schoolers.

"You have to get yourself grounded again," she added.

Debbie Phelps was honoured as the "Johnson's Baby Mom of the Olympic Games" and shot the commercial as part of the company's "Thanks, Mom" ad campaign. She has used her visibility to promote awareness for attention deficit hyperactivity disorder, with which Michael was diagnosed as a child.

She believes that more than medication is needed to help kids with ADHD.

"Kids need structure. Kids needs consistency," she said. "I don't care if they have ADHD or not, they have to have those parameters in order to be successful."