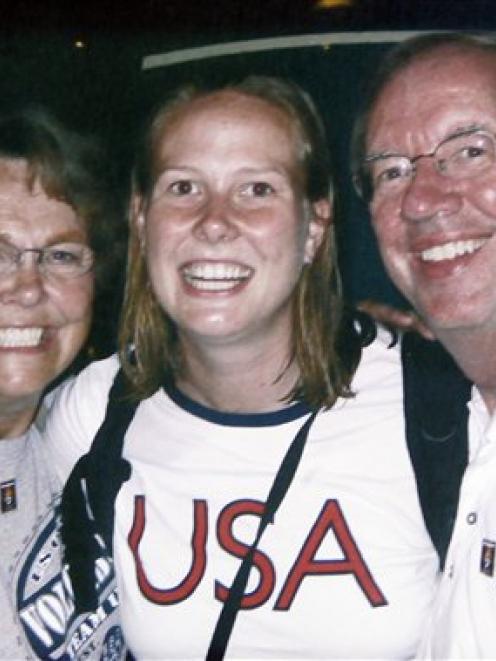 n a undated family photo released by Bachman's Inc, a Minneapolis company, CEO Todd Bachman, right, is shown with his wife Barbara, left, and daughter, former Oympian Elisabeth. Photo by AP.
The fatal stabbing of the father-in-law of Kiwi volleyball coach Hugh McCutcheon at a Beijing landmark cast a sad shadow over the first full day of Olympic competition, just hours after China's jubilant opening of the Summer Games.

US men's volleyball coach Hugh McCutcheon, born and bred in Christchurch, was preparing his gold medal favourite team for their first game tonight when he was told of the killing.

Todd and Barbara Bachman of Lakeville, Minnesota - parents of 2004 volleyball Olympian Elisabeth "Wiz" Bachman and in-laws of McCutcheon - were attacked by a Chinese man while visiting the 13th-century Drum Tower.

The US Olympic Committee confirmed Bachman died from knife wounds and that Barbara Bachman suffered life-threatening injuries. She and their Chinese tour guide, who was also injured in the attack, were being treated in a Beijing hospital.

Elisabeth Bachman was with them at the time of the attack, but uninjured. Her father was chief executive officer for Bachman's, Inc., a home-and-garden center based in Minneapolis.

Relatives said Barbara Bachman had undergone surgery and was in intensive care at a Beijing hospital.

"The next 24 hours will be critical," said Dale Bachman, Todd's second cousin.

Two of Todd and Barbara Bachman's other adult daughters were flying to China to be with their mother and Elisabeth, Dale Bachman said at a news conference in Minneapolis.

According to Dale Bachman, Todd Bachman was walking a few steps behind his wife and daughter at a Beijing tourist site when he was attacked by a knife-wielding stranger. Barbara Bachman heard the commotion and turned to help her husband.

"That's when she was attacked," Dale Bachman said. "To me, that was a strong indication of her love. She is a fabulous person."

The midday attack sent shock waves through the games precinct after the Olympics' spectacular opening ceremony had set an ebullient tone. President George W. Bush, in the Chinese capital for the games, expressed sadness while American athletes and Olympics officials reacted with disbelief.

There was no indication that the assailant knew that his victims had any connection to the games. "For all intents, it appears to be a random attack by a deranged man," an American member of the International Olympic Committee, Jim Easton, told The Associated Press. "The only thing we've heard is they were not identifiable except for a small volleyball pin which would probably be invisible to a guy."

Easton said the attack has stunned the Olympic community.

"It's certainly a down day, certainly for the U.S. people," he said. "Here it is supposed to be a great time of happiness and peace and all that. That's what we work hard for, then for one person to be able to put a dark cloud on that."

The U.S. women's indoor volleyball team heard about the killing of their former teammate's father before they took on Japan in a match Saturday. After their victory, player Logan Tom was obviously shaken.

"God, we all love Wiz," she said. "It's hard to put it in words. That's not something that's supposed to happen."

Tom then turned away, crying.

"It's just tragic," said U.S. woman's basketball coach Anne Donovan. "I don't know if there's another word for it. We said a prayer for them in the locker room. I get goosebumps talking about it. It's something obviously that just changes the events right now for the Olympic Games."

Violent crime against foreigners is rare in tightly controlled China, and the assault at the Drum Tower, five miles from the main Olympics site, occurred despite major security measures that have blanketed the capital city during the Olympics: A 100,000-strong security force plus countless volunteer guards have been deployed to protect against any trouble.

Beijing's Communist leaders are hypersensitive about anything that could take the shine off the games. China's Foreign Ministry said it had no immediate comment on the attack. It was not mentioned in the main evening news bulletin on state-controlled television, though it was reported by the official Xinhua News Agency and other Chinese-language media.

Interpol said initial investigations found nothing indicating the murder was linked to terrorism or organized crime.

"So far, our database check and preliminary analysis suggest that today's murder-suicide was an isolated, though brutal, murder of one person and assault on two others," said Interpol Secretary General Ronald K. Noble.

Tang's name was run through computers containing more than 178,000 individuals, including 12,000 suspected terrorists, and came up blank. But Noble noted that the investigation was not complete.

Interpol said Tang had apparently recently divorced and had not been seen by relatives for two months.

U.S. Ambassador Clark T. Randt visited the victims in hospital, and the embassy issued a statement later that said the attack "appears to be a senseless act of violence."

Jennie Finch, a member of the U.S. softball team, said her heart skipped a beat when she heard about the attack, but was undaunted.

"I'm here with my husband and son, so it's not easy but we're living our dreams and we're not going to live in fear," she said. "We're going to go out there every day and enjoy every day and celebrate it."

Attacks on foreigners in China are extremely rare. A Canadian model was murdered last month in Shanghai - police said she stumbled onto a burglary. In March, a screaming, bomb-strapped hostage-taker who commandeered a bus with 10 Australians aboard in the popular tourist city of Xi'an was shot dead by a police sniper.

Shanghai and Beijing are still safer than most cities of their size. Punishments for crimes against foreigners are heavier than for crimes against Chinese, and police-linked neighborhood watch groups are highly vigilant. Chinese are not allowed to own guns. Still, the U.S. government has warned Americans against muggings, beatings and even carjackings, especially in the nightlife and shopping districts of large cities.

The Drum Tower is one of few ancient structures still in fast-developing Beijing. Long ago, drummers pounded their massive instruments on the hour to let people in the imperial city know the time. It is located on an important central axis of the city, to the north of the Forbidden City, which was home to the emperor.