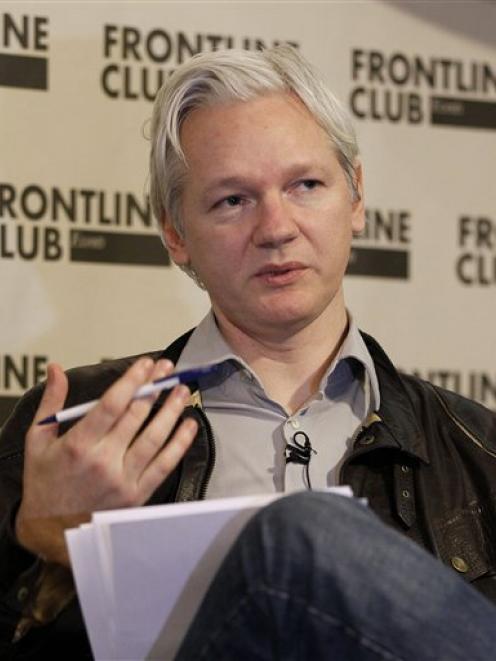 Julian Assange, founder of WikiLeaks speaks at a press conference in London. WikiLeaks says it is publishing a massive trove of leaked emails from US intelligence analysis firm Stratfor, shedding light on the inner workings of the Texas-based think tank. (AP Photo/Kirsty Wigglesworth)
Private intelligence firm Stratfor is in the business of shedding light on the world for its many clients.

Now, anti-secrecy group WikiLeaks is the one shedding light on Stratfor, saying it has more than 5 million of the company's emails and will publish them in collaboration with two dozen international media organizations.

The small selection so far published on WikiLeaks' website gives a look at the daily routine of the Texas-based think tank, whose clients range from local universities to global megacorporations. One described a $US6000-a-month payment made to a Middle Eastern source, another carried bits of gossip dropped by a retired spy, and many were filled with off-color office banter.

An initial examination of the emails turned up a mix of the innocuous and the embarrassing, but WikiLeaks chief Julian Assange promised more explosive material in the coming weeks.

"What we have discovered is a company that is a private intelligence Enron," Assange told London's Frontline Club, referring to the Texas energy giant whose spectacular bankruptcy turned it into a byword for corporate malfeasance.

Assange accused Stratfor of funnelling money to informants through offshore tax havens, monitoring activist groups on behalf of big corporations and making investments based on its secret intelligence.

Stratfor denied there was anything improper in the way it dealt with its contacts.

"Stratfor has worked to build good sources in many countries around the world, as any publisher of global geopolitical analysis would do," the company said in a statement. "We have done so in a straightforward manner and we are committed to meeting the highest standards of professional conduct."

The Stratfor statement suggested the company wouldn't be commenting further on Assange's allegations.

"Having had our property stolen, we will not be victimized twice by submitting to questioning about them," the statement said.

How WikiLeaks got the company's emails remains unclear. Assange refused to answer questions about the matter on Monday, but Stratfor said the messages appeared to be the same ones stolen by hackers in December. That breach, claimed by the Internet activist group Anonymous, ravaged the company's servers and led to the disclosure of thousands of credit card numbers and other information.

Wired magazine quoted an unnamed member of Anonymous as saying that the stolen data had been transferred to WikiLeaks, which allegedly acknowledged receiving the transfer using a coded message on Twitter. Anonymous appeared to confirm that account, pointing to the cryptic message "rats for donavon," which WikiLeaks posted on December 30.

Several media groups, including Rolling Stone magazine and German broadcaster NDR, said they have been offered advance access to the emails and will publish stories based on the documents if appropriate.

It's unclear what impact the leak will have on Austin, Texas-based Stratfor. The company counts investment firms, academic institutions and major multinationals among its clients, and one academic said that the disclosure would likely scare away corporate clients.

"When people discover, 'Hey, here's your clients,' then your clients are chilled," said Jeffrey Addicott, the director for the Center of Terrorism Law at St. Mary's University in San Antonio, Texas. "It causes a certain uproar."

Some clients are already facing questions. Among the emails are reports apparently compiled for The Dow Chemical Co. on activists who have targeted the company over its links to the Bhopal gas leak disaster, which killed thousands of Indians and spawned a long-running legal battle.

Dow said in a written statement that "major companies are often required to take appropriate action to protect their people and safeguard their facilities," adding that it operated within the law.

The reports prepared for Dow appeared to be little more than roundups of news stories and Internet chatter, but Stratfor also boasts of more serious sources.

One leaked email quotes Stratfor Vice President of Intelligence Fred Burton bragging about his "trusted former CIA cronies." In another, he promises to "see what I can uncover" about a classified FBI investigation.

Messages left for Burton weren't immediately returned. Stratfor has speculated that some of the leaked emails may have been altered or forged, although the firm did not provide any evidence of tampering. Anonymous said in a Twitter message that the suggestion of forgery was "pathetic."

Another Stratfor email warned about letting people know too much about how the company operated.

"I think showing too much of our inner workings devalues our Mystique," the email said. "People don't know how we collect our intelligence and that's one of the cool, mysterious things about STRATFOR."