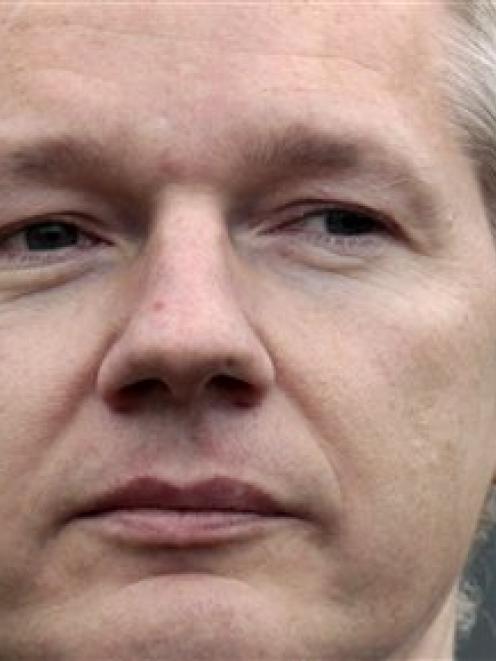 Julian Assange
WikiLeaks founder Julian Assange, holed up inside Ecuador's embassy in London to avoid extradition, would leave the embassy and face arrest if the Latin American country turned down his asylum request, a colleague says.

In a dramatic twist in the long-running saga, the former computer hacker fled into the embassy on Tuesday and now risks being arrested the moment he leaves the premises after breaching bail to avoid extradition to Sweden.

Alternatively, Ecuador may allow Assange to stay at the embassy indefinitely.

Kristinn Hrafnsson, the WikiLeaks spokesman who saw Assange inside the embassy in London's upscale district of Knightsbridge on Thursday, said Ecuador could take days to make up its mind.

"If asylum is not granted I assume Assange will leave the embassy and be arrested," he said.

"The asylum request is being processed by the Ecuadorean authorities who are waiting for the information they requested from the UK, U.S. and Swedish authorities before they decide the matter.

"It could take hours, it could take days but I would not expect a decision today, it would be highly unlikely," he said.

Assange, whose surprise move set off a media storm in Britain, lost a long-running legal battle last week to avoid extradition from Britain to Sweden on sex assault charges.

He spent nine days in jail in Britain before being released on bail on December 16, 2010. Legal experts say it is unclear what will happen to a 240,000 pound deposit provided by his supporters, including celebrities, to secure his bail.

As the affair unfolded, Assange's behaviour has become increasingly unpredictable, exposing his liking for the limelight and costing him the support of some former friends.

Sarah Saunders, a friend who helped put up surety, told reporters outside the embassy that he was in "good spirits". "He is working hard on his asylum bid with the lawyers," she said.

After taking some strawberries and chocolate cake to Assange, she said she was not worried about her money at this stage, saying talks were continuing at the highest level.

Assange's room was small but very comfortable and nicely furnished, she said.

Assange is safe from arrest as long as he stays inside the embassy as British police are not allowed to enter the building without authorisation from Ecuador. But even if Quito granted him asylum, he has no way of leaving Britain without passing through London and risking arrest.

Police officers waited patiently outside the five-storey, red-brick building in the pouring rain on Thursday but there was no sign of Assange himself. An embassy spokeswoman, when asked about him, said: "He is here. He is okay."

"It doesn't change the fact that he has breached bail conditions and this means he is liable to be arrested," said a London city police spokesman.

A group of Assange supporters bearing banners and posters rallied outside the embassy, calling for his freedom.

"Julian has done amazing work showing up the nature of our governments," said one protester, Ben Griffin, 34. "He's now facing all these allegations."

Assange, whose mane of platinum hair has made him instantly recognisable around the world, denies any wrongdoing and says his life could be at risk if he were sent to the United States.

Yet, neither Sweden nor the United States has charged the 40-year-old with treason or spying.

Ecuador's deputy foreign minister Marco Albuja was earlier quoted by the Australian Broadcasting Corporation as saying that the government's decision was imminent.

"We still can't make a final decision public yet until tomorrow," he said. "The national government is considering its position and the president will give us his instructions tomorrow."