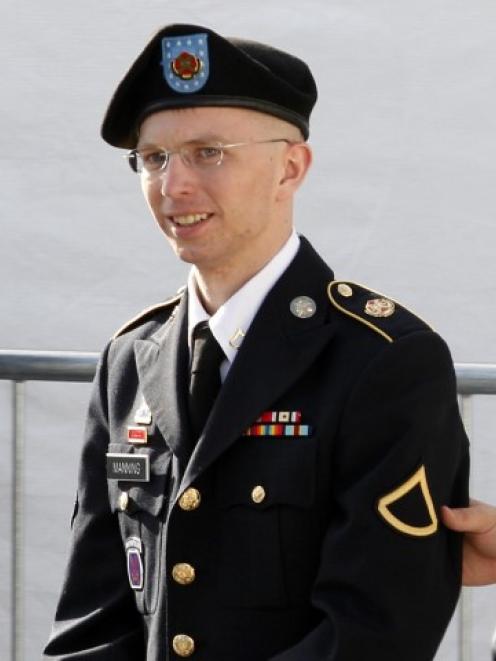 US Army Private First Class Bradley Manning (C) is escorted in handcuffs as he leaves the courthouse in Fort Meade, Maryland, in this June 2012 file photo. REUTERS/Jose Luis Magana/Files
US military prosecutors said arrogance drove the American soldier who has gone on trial accused of orchestrating the biggest leak of classified information in US history through the WikiLeaks anti-secrecy website three years ago.

But at the opening of the court-martial of intelligence analyst Bradley Manning, 25, his defense lawyer portrayed him as a naïve young soldier who had leaked the documents, combat videos and other data because he wanted to reveal the human costs of the wars in Afghanistan and Iraq.

Private First Class Manning faces a possible life sentence without parole if convicted at his court-martial in Fort Meade, Maryland, for leaking more than 700,000 secret documents in 2010, angering the United States government.

"This is a case of what happens when arrogance meets access to classified networks," lead prosecutor US Army Captain Joe Morrow said in his opening comments in court at Fort Meade, Maryland. "This had great interest to our adversaries and to our enemies."

Manning wore a dress uniform and sat at the defense table between his lawyers. He faces 21 counts, including the most serious one of aiding the enemy, and prosecution under the Espionage Act of 1917. Manning pleaded guilty in February to 10 lesser charges, but prosecutors rejected the pleas and are pursuing their original charges.

Manning has said he released the files to start a domestic debate on the military and on foreign policy in general.

The prosecutor Morrow told the court that Manning downloaded some 251,287 State Department cables, using an automated toll that allowed him to pull the documents down at the rate of more than 1,000 per hour.

JUDGE TO CLOSE PARTS OF TRIAL

The judge, Colonel Denise Lind, said last month she would close parts of the trial to the public to protect classified material.

Manning, who has been jailed since his arrest three years ago, was charged with downloading classified documents and forwarding them to WikiLeaks. The website began exposing the secrets the same year, stunning diplomats and US officials who said the leaks endangered lives.

Under a ruling last month by the judge, Manning would have any sentence reduced by 112 days to compensate for the harsh treatment he received during his confinement at the Quantico Marine Base in Virginia.

WikiLeaks founder Julian Assange has taken refuge in the Ecuadorean Embassy in London since June 2012 to avoid extradition to Sweden, where he is wanted for questioning about allegations of rape and sexual assault. Assange denies the allegations.

Assange and Manning are the subject of a documentary, "We Steal Secrets: The Story of WikiLeaks", which opened in theatres 10 days ago.

Manning's court-martial about 30 miles (50 km) northeast of Washington, is expected to run until at least late August.

Lind on Monday began the trial by asking Manning a number of procedural questions, including whether he was willing to have the case decided by a judge rather than a jury and whether he was satisfied with his defense team.

"Yes, your honour," replied Manning, who was arrested in May 2010 while serving in Iraq.

The courtroom, which can seat about 40 people, was crowded on Monday with media and onlookers, including Cornel West, a civil rights and political activist who has taught at Yale, Harvard, Princeton and Union Theological Seminary in the City of New York.

"I'm here to have solidarity with my devoted brother Bradley Manning," West said outside the courtroom. "I'm going to be here as often as I can. My spirit will be here. He is a courageous young brother."

Also at Fort Meade, WikiLeaks stationed a truck in the parking lot with a sign reading, "Mobile information collection unit."