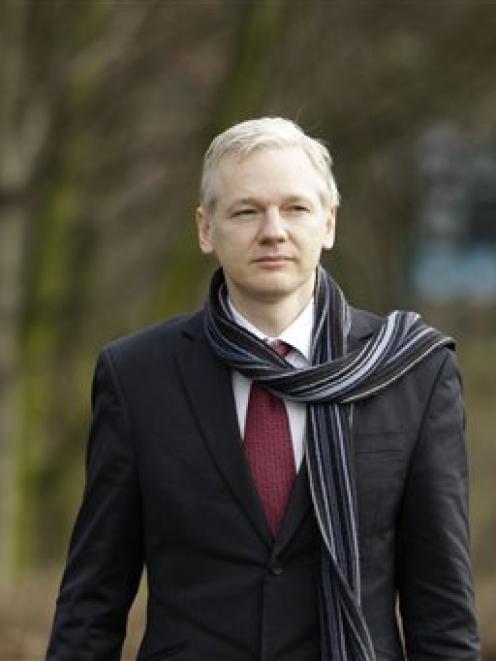 Julian Assange arrives for his extradition hearing at Belmarsh Magistrates' Court in London. (AP Photo/Matt Dunham)
Julian Assange can be extradited to Sweden in a sex crimes inquiry, a British judge ruled today, rejecting claims by the WikiLeaks founder that he would not face a fair trial there. Assange's lawyer said he would appeal.

Judge Howard Riddle said the allegations of rape and sexual molestation by two women against Assange meet the definition of extraditable offences and said the Swedish warrant had been properly issued and was valid.

Assange, 39, a key figure in the release of tens of thousands of secret US government and military documents, has been out on bail during the extradition fight. He has seven days to appeal the ruling in British courts.

After hearing three days of testimony this month, Riddle concluded "there is simply no reason to believe there has been a mistake" about the European Arrest Warrant issued by Swedish authorities.

In his ruling, the judge dismantled the defence case against extradition point by point. He rejected the claim that comments made against Assange by Swedish prosecutors and politicians would pervert the course of justice.

Assange's lawyers also said that Sweden's custom of hearing rape cases behind closed doors meant he would not get a fair trial, but Riddle said the practice was common in Sweden.

Assange's lawyers have questioned Sweden's judicial process and expressed concern their client risks being handed over to the United States, which is investigating whether Assange and WikiLeaks have violated US laws by distributing secret government documents.

WikiLeaks has released tens of thousands of US military documents on the wars in Afghanistan and Iraq and on US diplomatic efforts worldwide, deeply angering US officials.

The judge said it was wrong for the defence to raise the question of a possible extradition to the US or the US prison in Guantanamo Bay, Cuba, given the absence of any evidence that Assange risks torture or execution.

The Swedish case stems from charges of sexual misconduct made against Assange by two women after he visited Sweden last August. Lawyers for Sweden have argued that authorities made repeated attempts to interview Assange while he was in Scandinavia, to no avail.

In Sweden, Claes Borgstrom, the lawyer representing the two women, said the decision had been expected.

"It's just too bad that it took so long," Borgstrom said. "(Assange) will probably appeal this decision for some reason that is hard to understand. He claims that he hasn't committed a crime so he should just come here and sort it out. I expect that he will be on Swedish soil before the summer."

Bjorn Hurtig, Assange's Swedish lawyer, told The Associated Press that he was already preparing to represent his client.

"If he comes to Sweden I think he has great chances of being freed," Hurtig said. "And I'll be waiting for him, ready to fight for him tooth and nail."

About a dozen WikiLeaks and Assange supporters in ski hats and parkas gathered outside the court hours before the hearing, hanging banners and signs saying "Free Julian Assange and Bradley Manning," the US Army private suspected of leaking the documents to WikiLeaks.

Vaughan Smith, the founder of the Frontline Club who has been hosting Assange at his country estate, said the ruling was "disappointing."