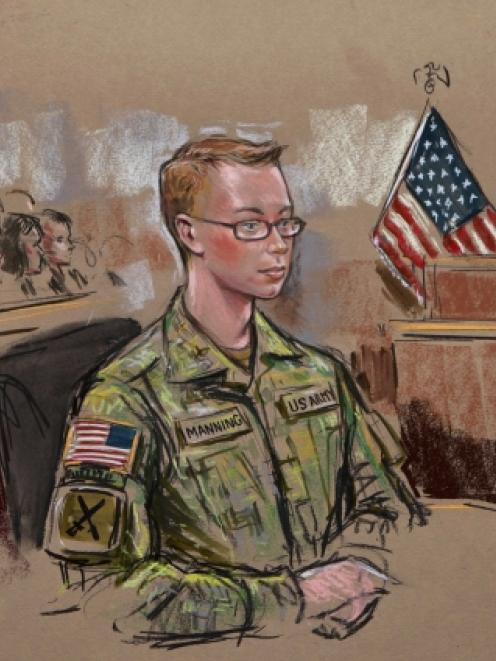 Bradley Manning is seen in a courtroom sketch. REUTERS/Bill Hennessy
An American Army intelligence analyst suspected of being behind the largest leak of classified documents in US history has made his first court appearance, sitting stone-faced as military prosecutors launched into their case against him.

Private First Class Bradley Manning, 23, faces charges including aiding the enemy, which could send him to prison for life. He is suspected of being the source of documents that eventually were released on the Internet by WikiLeaks - data dumps that Washington said jeopardised national security.

Manning was quiet as he sat in the courtroom at Fort Meade, Maryland, wearing military fatigues and dark-rimmed glasses, occasionally taking notes during the pre-trial proceedings.

He answered with a quick, "Yes, sir" when investigating officer Lieutenant Paul Almanza asked him whether he understood the charges against him.

After questioning Almanza, Manning attorney David Coombs announced that the defence was filing a motion for the investigating officer to recuse himself because of his work at the Department of Justice.

The Justice Department is investigating WikiLeaks founder Julian Assange. If Justice "had its way," Coombs argued, it would get a plea from Manning that would help it "go after Assange." Almanza rejected the motion.

Security was tight as media and some protesters gathered at the base, which also serves as the home of the secretive intelligence-gathering National Security Agency.

WikiLeaks eventually posted online hundreds of thousands of sensitive diplomatic cables that exposed the candid views of US officials and their allies.

It also released about half a million classified US files on the Iraq and Afghan wars.

Prosecutors aim to show there is sufficient evidence to bring Manning to trial at a general court martial on 22 criminal charges.

If convicted of all counts, Manning would face a maximum punishment of life imprisonment, reduction in rank to the lowest enlisted pay grade, forfeiture of all pay and allowances and a dishonorable discharge, the Army said in a statement.

The most serious charge, aiding the enemy, is a capital crime that carries the death penalty but the Army has indicated it does not plan to seek that punishment.

For much of the time since his detention beginning in May 2010 in Iraq, Manning was held on a charge of improperly obtaining a classified gunsight video that showed a 2007 helicopter attack that killed a dozen people in Iraq, including two Reuters journalists. The video was released publicly by WikiLeaks.

The additional charges were brought against Manning last spring.