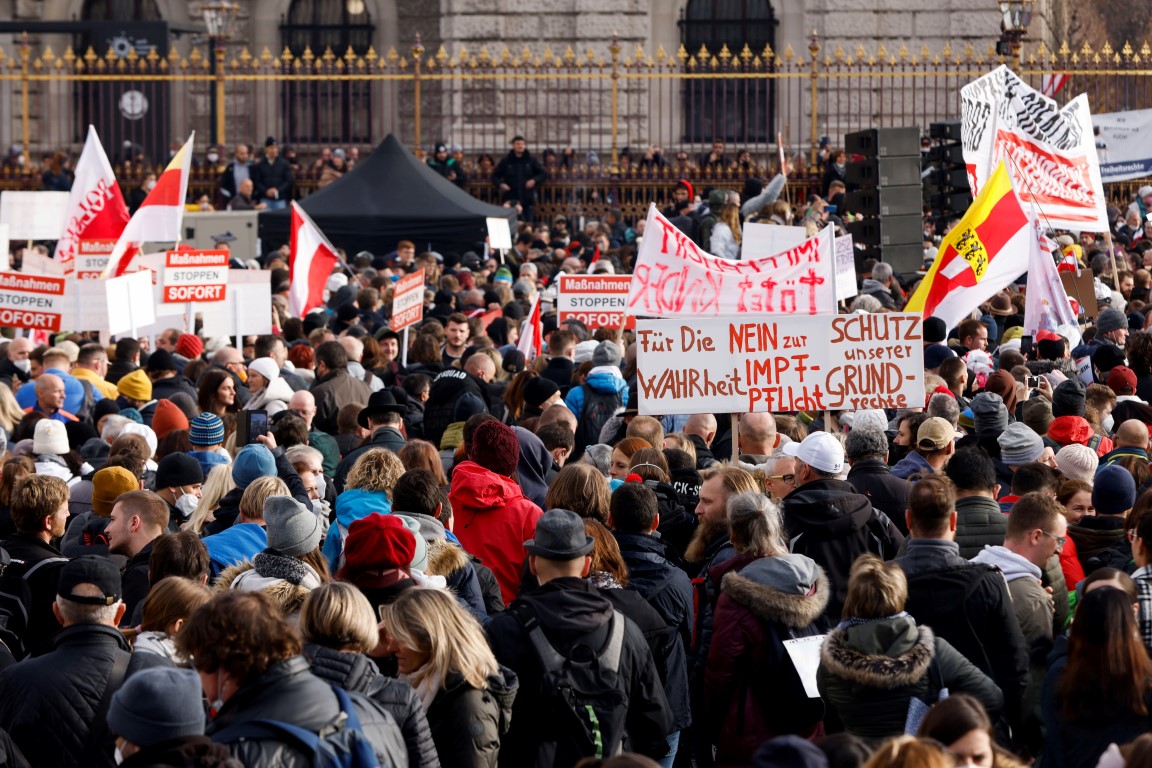 Demonstrators gather to protest against coronavirus measures in Vienna, Austria, at the weekend. Photo: Reuters
Austria has become the first country in western Europe to reimpose lockdown since vaccines were rolled out, shutting non-essential shops, bars and cafes as surging caseloads raised the spectre of a second straight winter in deep freeze for the continent.

With Europe once again the centre of the global pandemic that first prompted lockdowns in March 2020, new restrictions and vaccine mandates are expected to spread nearly two years after the first COVID-19 case was identified in China.

"We are in a highly dramatic situation. What is in place now is not sufficient," Merkel told leaders of her conservative CDU party in a meeting, according to two participants, confirming comments first reported by Bloomberg.

German Health Minister Jens Spahn, urgently calling on people to get vaccinated, said he was certain that by the end of the winter everyone in Germany would be "vaccinated, recovered or dead".

Austria told people to work from home if they can, and shut cafes, restaurants, bars, theatres and non-essential shops for 10 days. People may leave home for a limited number of reasons, such as going to workplaces, buying essentials or taking a walk.

The Austrian government has also announced it will make it compulsory to get inoculated as of February 1. Many Austrians are sceptical about vaccinations, a view encouraged by the far-right Freedom Party, the third biggest in parliament.

"It's like a luxury prison. It's definitely limited freedom and for me it's not great psychologically," said Sascha Iamkovyi, a 43-year-old entrepreneur in the food sector, describing his return to lockdown on a chilly, overcast day in an unusually quiet Vienna.

"People were promised that if they got vaccinated they would be able to lead a normal life, but now that's not true."

The return of severe government restrictions in Austria had already brought about 40,000 protesters to Vienna's streets on Saturday, and protests turned to violence in Brussels and across the Netherlands over the weekend.

The Czech Republic and Slovakia banned unvaccinated people from services including pubs from Monday.

Around a third of Austrians are unvaccinated, one of the highest rates in western Europe, and authorities mainly blame the unvaccinated for the current COVID wave, though protection from vaccines given early this year is also waning. Inoculation greatly reduces the risk of serious illness or death, and reduces but does not prevent viral transmission or re-infection.

In many parts of Germany, including its capital Berlin, Christmas markets opened for the first time in two years on Monday. But states bordering Austria and the Czech Republic that have Germany's highest case numbers have introduced stricter rules, cancelling Christmas markets, barring the unvaccinated from restaurants and bars and imposing curfews at night.

Eastern European countries where vaccination rates are even lower have been experiencing some of the highest death tolls per capita in the world, with hospitals becoming overrun in countries such as Bulgaria and Romania.

In cities across the Netherlands, riots broke out as police clashed with mobs of angry youths who set fires and threw rocks to protest at COVID-19 restrictions. More than 100 people were arrested during three nights of violence, which saw police open fire at rioters in Rotterdam on Friday.

Police and protesters clashed in the streets of Brussels on Sunday, with officers firing water cannon and tear gas at demonstrators throwing rocks and smoke bombs.

In France, proof of vaccination or a recent negative test is required to go to restaurants and cinemas. President Emmanuel Macron said last week more lockdowns were not needed.

But violence erupted last week in on the French Caribbean island of Guadeloupe https://www.reuters.com/world/europe/paris-must-restore-calm-guadeloupe-... amid protests over COVID-19 restrictions such as the mandatory vaccines for health workers.

Police have arrested at least 38 people and dozens of stores have been looted. Macron said on Monday the protests had created a "very explosive" situation as a general strike entered a second week on Monday and many stores remained shuttered.