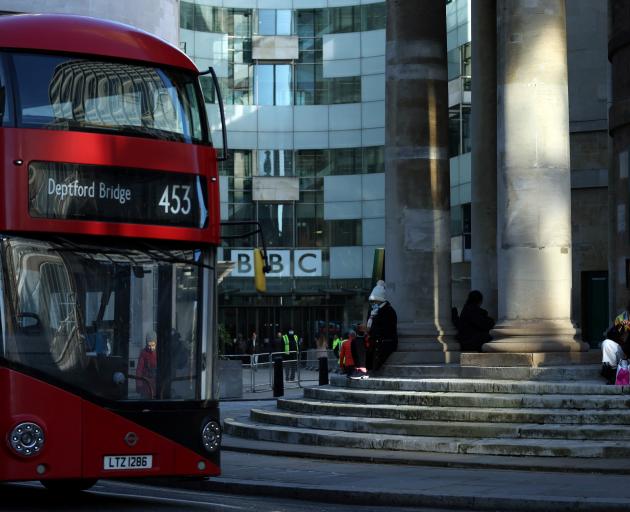 The BBC has been admired globally for its high-quality news output, drama and documentaries but in recent years it has struggled to navigate the heightened political and cultural disputes gripping Britain, notably about Brexit. Photo: Reuters
Britain will freeze funding for the BBC for two years and debate whether a universal licence fee should continue, the government says, sparking accusations of "cultural vandalism".

While the government did not want to "destroy" the 100-year-old British "beacon", Culture Secretary Nadine Dorries told parliament on Monday that it could not receive more money at a time when households were being hit by rising taxes and energy bills.

Created to educate, inform and entertain, the BBC has been admired around the world for its high-quality news output, drama and documentaries by broadcasters such as Sir David Attenborough.

But in recent years it has struggled to navigate the heightened political and cultural disputes gripping Britain, notably about Brexit, with critics saying its London-centric, metropolitan viewpoint fails swathes of the country.

"It is nobody's intention to destroy the BBC," said Dorries, a member of the ruling Conservative Party. "It's a beacon."

Analysts have said a below-inflation settlement will require cuts to BBC output, which includes global, national and local radio, online content and broadcast and on-demand television.

Lucy Powell, the opposition Labour spokeswoman for culture, told parliament that the funding freeze was an attack on one of the biggest institutions in British public life, and accused Dorries of "cultural vandalism".

BBC's news bulletins recorded some of the highest viewing figures for 20 years during the Covid-19 pandemic, and it remains more trusted than competitors, but it has admitted it could do more to be impartial.

Under the new agreement the licence fee - a tax on all television-owning households - will be frozen at £159 ($NZ319) a year until 2024, before it can rise in line with inflation for four years.

Serious questions needed to be asked about the future of the licence fee in 2028 and beyond, Dorries said, and in particular whether a universal charge with criminal penalties for evasion was still appropriate when the public can subscribe to many platforms, like Netflix and Amazon Prime.

She said she was starting a debate, adding that analysis on alternatives had not yet been done.

However, on Sunday she tweeted that this licence fee announcement would be "the last", saying the days when elderly people could be threatened for not paying had to end.

"This is 2022, not 1922," she said. "We need a BBC that is forward-looking and ready to meet the challenges of modern broadcasting."