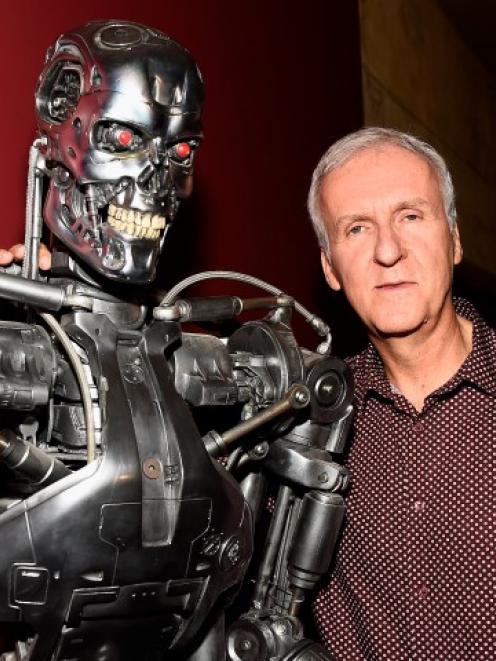 James Cameron attends the American Cinematheque 30th Anniversary Screening Of 'The Terminator' Q+A at the Egyptian Theatre in Hollywood. Photo Getty Images
Terminator director James Cameron is one of the Hollywood's leaders in film technological advances. So you'd imagine he'd have the latest, biggest iPhone 6.

But Cameron tells us that he's the proud owner of a 10-year-old flip phone. We didn't believe him either, so we asked to see it and he mumbled something about leaving it at home.

But the point is, Cameron is not a fan of highly track-able smartphones. You could already see his concern in 1984's Terminator with the artificial intelligence network Skynet taking over the world and sending out Terminators and such.

"Apple has enough people with their devices being tracked by the government. Every place you go with that thing they know exactly where you are," says Cameron. "So you want to talk about Skynet."

"You're toast," he added with only a slight smile, speaking at a 30th anniversary Terminator screening this week (this film is out on Blu-Ray for those who missed the Hollywood event).

"It's not that I have anything to hide," Cameron said. "To me it's a matter of principle."

Besides, smartphones are so popular, it's kind of fun to be contrary.

And don't even think about asking the most exciting tech-director of our generation (Avatar, Titanic) to talk about his favourite app. No answer there, which makes sense since his device usage is pretty limited with a flip-phone.

"For me Microsoft Word is as sophisticated as I get, it's true," says Cameron. "I'm just not interested in computers at all unless they are doing high-end performance capture work or something like that."

As to whether or not he fears a Skynet-situation 30 years after the film. His answer is ominous.

"Skynet has already won," says Cameron. "Everyone is already wired to their computers."