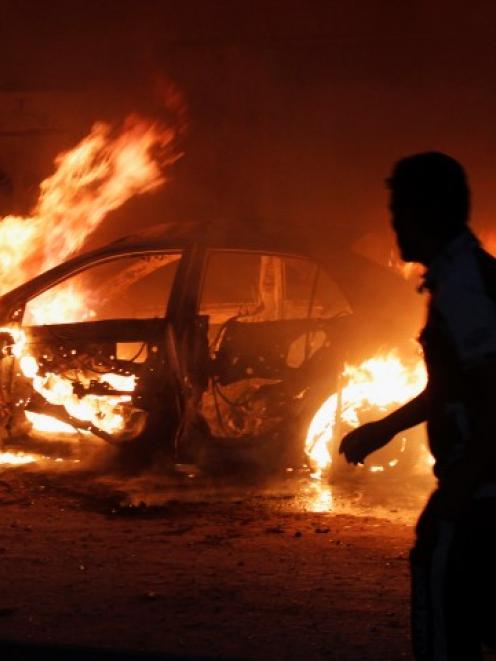 A man looks at a car on fire at the site of a bomb attack in Baghdad. REUTERS/Ahmed Saad
Bombs have exploded across the Iraqi capital, killing at least 38 people, police say, as suspected Sunni Islamist militants pursue a campaign to provoke intercommunal conflict.

Eight of the 10 blasts in Baghdad were in mainly Shi'ite districts, but there was also an explosion in a mixed area and another in the predominantly Sunni Muslim neighbourhood of Doura.

In the deadliest attack, a parked car blew up in a commercial street in Husseiniya, killing five people.

Separately, four members of a government-backed Sunni militia were killed in a roadside bombing in northern Baghdad earlier on Monday, and six people including a police officer died in fighting between militants and special forces in Hilla, 100 km (60 miles) south of the capital.

A surge of violence has killed more than 6,000 people across Iraq this year, reversing a decline in sectarian bloodshed that reached a climax in 2006-07.

At that time, Sunni tribesmen banded together and found common cause with U.S. troops to rout al Qaeda, forcing it underground. But al Qaeda has re-emerged this year to join forces with fellow militants in neighbouring Syria.

The civil war in Syria has put acute pressure on Iraq's delicate sectarian balance, which was already under strain from power struggle between Sunnis, Shi'ites and ethnic Kurds, who run their own affairs in the north.

The al Qaeda-affiliated Islamic State of Iraq and the Levant claimed responsibility on Sunday for a rare bomb attack in the usually peaceful Kurdistan region last month.

At least six people were killed when militants tried to storm the headquarters of the security services in the Kurdish capital Arbil on Sept. 29, the first big attack there since 2007.

In a statement posted online, the group said the attack was in response to Iraqi Kurdish leader Masoud Barzani's pledge to defend fellow Kurds in Syria.

In recent months, a Kurdish militia has been fighting mainly Arab rebels and Islamists in northern Syria, opening an ethnic front in a civil war that has increasingly been fought along sectarian lines.