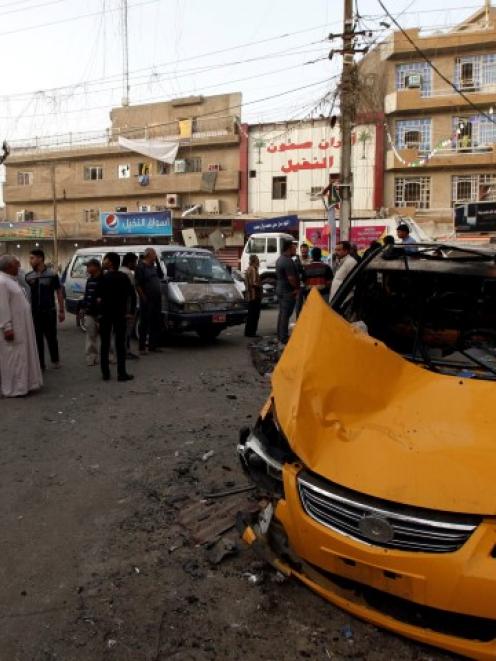 People gather at the site of a car bomb attack in Baghdad at the weekend. REUTERS/Thaier Al-Sudani
A suicide bomber driving a minibus has blown himself up outside a cafe in a mainly Shi'ite Muslim district of the Iraqi capital, killing at least 38 people, police and medics said.

At least 12 people were killed in a spate of suicide bomb attacks on security personnel and government buildings earlier in the day, police said.

Violence in Iraq, which had eased after reaching a climax in 2006-07, is now rising again, with more than 7,000 civilians killed this year, according to monitoring group Iraq Body Count.

There was no immediate claim of responsibility for any of the attacks, but Shi'ites are viewed as apostates by Sunni Islamist militants whose insurgency has revived this year.

"The cafe was full of people watching a soccer game and others smoking shisha (water pipe) when a minibus drove over the pavement and exploded right at the entrance to the cafe," said Ali Mahdi, a policeman whose patrol was stationed nearby.

"At first people in the cafe thought it was a drunk driver, until the blast tore them apart, covering the ground with chunks of human flesh and severed limbs."

Sectarian tensions in Iraq and the wider Middle East have been exacerbated by the Syrian civil war, which has drawn Sunnis and Shi'ites from across the region and beyond into battle.

Al Qaeda's Iraqi affiliate was forced underground in 2007 but has been invigorated by the war in Syria and by growing Sunni resentment of Iraq's Shi'ite-led government, which came to power after the U.S.-led invasion in 2003.

Sunnis feel their minority sect has lost out since the overthrow of Saddam Hussein, and many took to the streets in protest late last year.

A deadly raid by security forces on a protest camp in April touched off a violent backlash by militants who often target security personnel and others working for the government.

In what appeared to be coordinated attacks, bombers, some driving cars packed with explosives, attacked sites in the town of Rawa, 260 km (160 miles) northwest of Baghdad. Another bomber hit a busy street in the northern city of Samarra.

One attacker drove a car to a checkpoint on the main road into Rawa and blew himself up, officers told Reuters. Another targeted a police station and a third the house of the mayor, seriously wounding him and killing at least three people.

Attacks in Rawa last month were claimed by the Islamic State of Iraq and the Levant, which was formed earlier this year in a merger between al Qaeda's Iraqi and Syrian affiliates.

On the southern outskirts of Samarra, 100 km north of Baghdad, a suicide car bomber drove up to a group of people who had gathered at the scene of an earlier, smaller explosion close to the house of senior police officer Nasser Dawood.

He was away when the bomber set off his explosives. Most of the six people killed in the blast were members of his family.