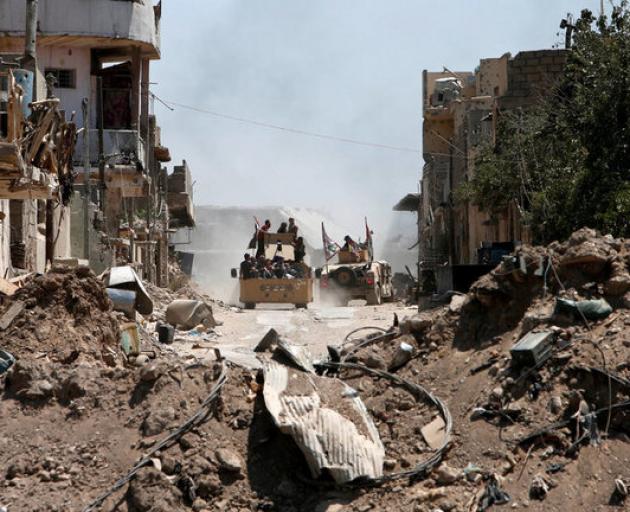 Iraqi forces opened exit routes for hundreds of civilians to flee the Old City of Mosul on Saturday (local time) as they battled to retake the quarter from Islamic State militants mounting a last stand in what was the de facto capital of their self-declared caliphate.

US-trained urban warfare units were channelling their onslaught along two perpendicular streets that converge in the heart of the Old City, aiming to isolate the jihadist insurgents in four pockets.

The week-old battle in the Old City is turning into the deadliest of the eight-month US-backed campaign to take back the northern city, which fell to the militants in June 2014.

A Reuters correspondent saw a young girl with facial injuries walking dazed and shocked across the frontline out of heavily-populated district with a group of neighbors. All her family was killed when their house collapsed, they said.

The United Nations voiced alarm on Saturday at the rising death toll among civilians in the fighting, saying as many as 12 were killed and hundreds injured on Friday.

“Fighting is very intense in the Old City and civilians are at extreme, almost unimaginable risk. There are reports that thousands, maybe even tens of thousands, of people are being held as human shields (by Islamic State)," Lise Grande, the UN humanitarian coordinator in Iraq, said in a statement. "Hundreds of civilians, including children, are being shot."

Iraqi authorities are hoping to declare victory in the northern Iraqi city in the Muslim Eid holiday, which marks the end of the fasting month of Ramadan, during the next few days.

Helicopter gunships were assisting the ground thrust, firing at insurgent emplacements in the Old City, a Reuters correspondent reported from a location near the frontlines.

The government advance was carving out escape corridors for civilians marooned behind Islamic State lines.

There was a steady trickle of fleeing families on Saturday, some with injured and malnourished children. "My baby only had bread and water for the past eight days," one mother said.

At least 100 civilians reached the safety of a government-held area west of the Old City in one 20-minute period, tired, scared and hungry. Soldiers gave them food and water.

More than 100,000 civilians, of whom half are believed to be children, remain trapped in the crumbling old houses of the Old City, with little food, water or medical treatment.

The urban-warfare forces were leading the campaign to clear the Sunni Islamist militants from the maze of Old City alleyways, moving on foot house-to-house in locations too cramped for the use of armoured combat vehicles.

French journalist Veronique Robert has died in Paris after being wounded in an explosion in Mosul earlier this week, her employer France Televisions said on Saturday.

Aid organisations and Iraqi authorities say Islamic State was trying to prevent civilians from leaving so as to use them as human shields. Hundreds of civilians fleeing the Old City have been killed in the past three weeks.

A US-led international coalition is providing ground and air support in the eight-month-old campaign to seize Mosul, the largest city the militants came to control in a shock offensive in Iraq and neighbouring Syria three years ago.

US-supported Iraqi government offensives have wrested back several important urban centres in the country's west and north from Islamic State over the past 18 months.

The fall of Mosul would mark the end of the Iraqi half of Islamic State's "caliphate" as a quasi-state structure, but IS would still hold sizeable, mainly rural and small-town tracts of both Iraq and Syria.