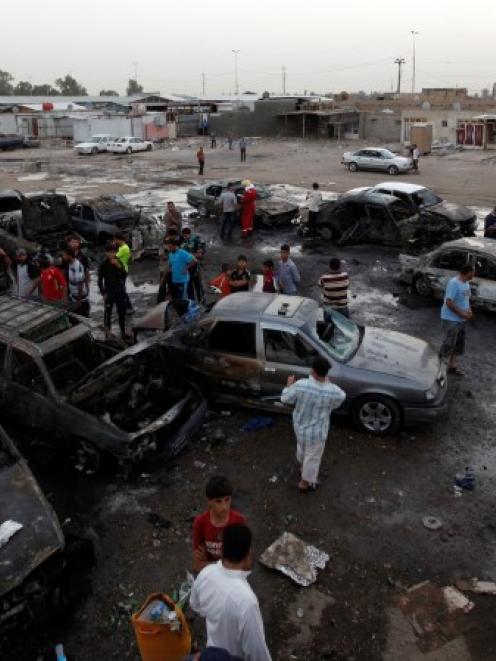 Residents gather at the site of a car bomb attack in Baghdad's Sadr City. REUTERS/Thaier al-Sudani
More than 70 people have been killed in a wave of bombings in markets in Shi'ite neighbourhoods across Baghdad in worsening sectarian violence in Iraq.

No group claimed responsibilty for the blasts. But Sunni Muslim Islamist insurgents and al-Qaeda' s Iraqi wing have increased attacks since the beginning of the year and often target Shi'ite districts.

More than a dozen blasts tore into markets and shopping areas in districts across the Iraqi capital, including twin bombs just several hundred meters apart that killed at least 13 people in the capital's Sadr City area, police and hospital officials said.

"A driver hit another car and left pretending to bring traffic police. Another car rushed to take him away and right after his car exploded among people who had gathered to see what was happening," said bystander Hassan Kadhim. "People were shouting for help and blood covered their faces."

Tensions between the Shi'ite leadership and the Sunni Muslim minority are at their worst since U.S. troops left in December 2011, and the conflict in Syria is straining Iraq's fragile communal balance.

More than 700 people were killed in attacks in April, according to a U.N. count, the highest monthly toll in almost five years. So far in May more than 300 have died.

Thousands of Sunnis began staging street protests last December against Shi'ite Prime Minister Nuri al-Maliki, whom they accuse of marginalising their sect since the fall of Saddam Hussein after the 2003 invasion.

The latest surge in violence began in April after a raid by the Iraqi army on a Sunni Muslim protest camp in the town of Hawija led to clashes with the security forces and more attacks.

Bombings on Shi'ite and Sunni mosques, security forces and Sunni tribal leaders over a month-long surge in violence are heightening worries Iraq risks returning to the level of sectarian violence that killed thousands in 2006-2007.