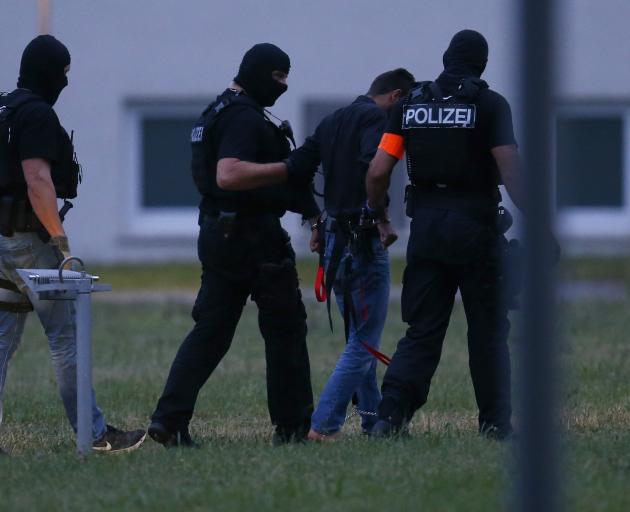 Twenty-year-old Iraqi Ali B. is escorted by special police upon his arrival in Wiesbaden. Photo: Reuters

The 20-year-old identified as Ali Bashar is suspected of raping the girl in March and sexually assaulting her again in May with a 14-year-old Afghan, the public prosecutor's office in Wiesbaden said.

Police arrested the Afghan suspect who originally was known to German authorities as a witness in the murder case of the 14-year-old, Susanna Feldman, the office said.

An outcry over the rape and murder case led Chancellor Angela Merkel's conservatives to call for stricter immigration rules and faster deportation of failed asylum seekers.

Messages of mourning, candles and flowers are placed by people for Susanna Feldman. Photo: Reuters

Iraqi authorities extradited Bashar to Germany on June 9 after Kurdish security forces took him into custody. He had left Germany with relatives early last month.

The Iraqi suspect, who arrived in Germany at the height of Europe's migrant crisis in 2015, was known to police because he had become violent with officials over his asylum status.

Bashar had previously been suspected in the rape of the 11-year-old girl at the refugee centre, although an initial investigation was inconclusive. His asylum request was rejected in December 2016.

Merkel's decision to welcome more than 1 million refugees in 2015 boosted support for the anti-immigrant Alternative for Germany party. The government has put aside more than 20 billion euros ($US23.5 billion) to integrate asylum seekers and tackle the root causes of migration.

Merkel last month coolly rebuffed US President Donald Trump's assertion made in a tweet that migrants were behind a surge in crime in Germany, pointing to statistics that showed crime was down.

How many rapes by German Citizens per day in the Bundesrepublik?