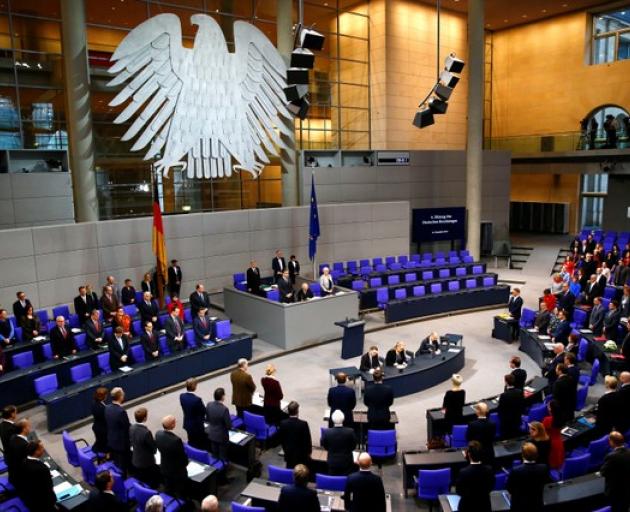 The soldier planned to carry out an attack at an unknown time on high-ranking politicians and public figures. Photo: Reuters

A German soldier was charged on Tuesday (local time) with plotting to kill senior politicians because of their support for refugees and trying to make it look like asylum seekers carried out the murders.

The officer, named only as Franco Hans A., was arrested in April in a case that shocked Germans and stirred a debate about the depth of right-wing radicalism in the Bundeswehr military.

"Motivated by a nationalist attitude, he planned to carry out an attack at an unknown time on high-ranking politicians and public figures who stood up for what the accused regarded as an especially refugee-friendly policy," the federal prosecutor's office said.

"He wanted people to believe that his attacks were related to radical Islamist terrorism committed by somebody who had been granted asylum," it added.

The statement did not say whether the soldier had denied the charges or include any statement from his lawyer.

Prosecutors suspect that Franco Hans A., along with two accomplices, wanted to implicate refugees in their planned attack by posing as an asylum seeker.

The case had put pressure on centre-right Chancellor Angela Merkel's government - with her close ally Defence Minister Ursula von der Leyen facing criticism for first failing to deal with right-wing extremism in the army and then implying that most soldiers were right-wing radicals.

The federal prosecutor's office said the soldier was accused of committing a serious act of violent subversion and violating the military weapons control law, as well as gun and explosives laws.

Franco Hans A., who served with an army battalion stationed in France, had used a fake identity to register as a Syrian refugee and moved into a shelter for migrants in Bavaria even though he speaks no Arabic, the prosecutors said.

The soldier had previously been detained in late January by Austrian authorities on suspicion of having hidden an illegal gun in a bathroom at Vienna's main airport, they added.

This is the extreme Right. In this case, a soldier of the defence force. The enemy within.