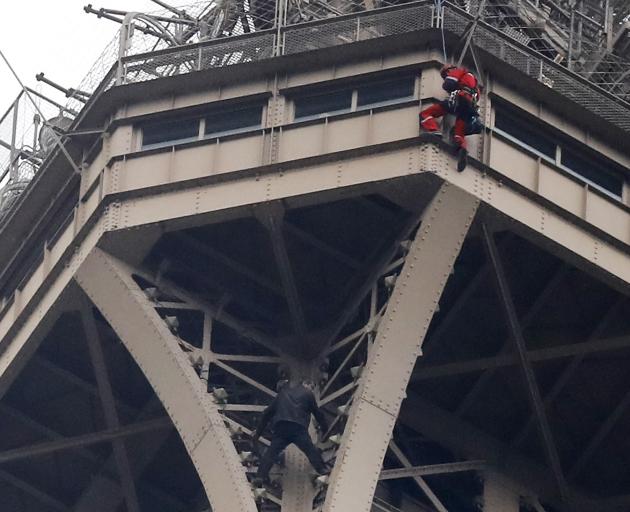 A rescue worker (above in red) descends to the man in black. Photo: AP
The Eiffel Tower was evacuated and closed on Monday after a man scaled nearly to the top of the Paris monument and refused to come down for several hours.

Members of a special firefighter climbing unit and police negotiators eventually persuaded the man to surrender, a Paris police official said. The official said the man was "under control and out of danger"  that night.

The Eiffel Tower in Paris has been closed down “until further notice” after a person tried to climb up the famous landmark pic.twitter.com/EGuqC8vdGM— TicToc by Bloomberg (@tictoc) May 20, 2019

Managers said the tower would reopen on Tuesday morning as usual and promised to reimburse people with reserved tickets whose visits were thwarted.

Security agents spotted the man dressed in black climbing up from the second floor in the early afternoon, triggering an operation to evacuate the 2500 visitors on the monument, the tower management company said in a statement. That included people dining on the second level.

The man eventually stopped his climb just below the third level, which is the highest level of the 324-metre tower, and stayed there. His motives remained unclear, and authorities declined to give details about his identity.

Hours into the sky-high incident, the man could be seen standing in the ironworks of Gustave Eiffel's 19th century monument. A rescuer dressed in red was nestled nearby, interacting with him.

Authorities would not say how the trespasser managed to get past the Eiffel Tower's stringent security system. The management company, called SETE, insisted that such intrusions remain "very rare."

It's not the first time someone has attempted to climb up the tourist attraction.

In 2015, British "freerunner" James Kingston climbed the edifice without safety ropes and without permission, dodging security cameras as he went.

However, as time passed on Monday it became increasingly unlikely that the incident was a prank or a challenge. The tower has seen occasional suicide attempts in the past.

The tower, the tallest structure in Paris, is about the same height as an 81-storey building.