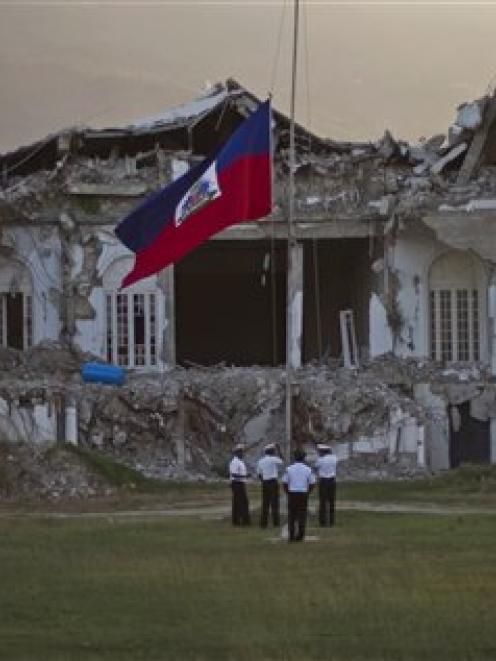 Police lower the national flag in front of the damaged presidential palace on the first anniversary of the magnitude-7.0 earthquake, in Port-au-Prince, Haiti. , Wednesday Jan. 12, 2011. (AP Photo/Ramon Espinosa)
The air was choked with memory today in this city where everyone lost a brother, a child, a cousin or a friend. One year after the earthquake, Haitians marched down empty, rubble-lined streets singing hymns and climbed broken buildings to hang wreaths of flowers.

The landscape is much as the quake left it, thanks to a reconstruction effort that has yet to begin addressing the intense need. But the voices were filled with hope for having survived a year that seemed to get worse at every turn.

"We've had an earthquake, hurricane, cholera, but we are still here, and we are still together," said Charlemagne Sintia, 19, who joined other mourners at a football stadium that served as an open-air morgue after the quake and later housed a tent camp.

Thousands gathered around the city to be with loved ones and pray. They flocked to the ruins of the once-towering national cathedral, to the soccer stadium, to parks, hillsides and the neighborhood centers.

Businesses were closed. Instead of traffic, streets were filled with people dressed in white, the color of prayer and mourning. They waved their hands, cheered and called out to God as they wound down roads beset by ruins. Astride the unrepaired buildings are camps where an estimated 1 million people still live, unable to afford new homes.

"God blessed me by taking only one of my cousins that day. Our house collapsed but we have health and life," said Terez Benitot, a 56-year-old woman whose husband, a mason, can not find work amid a reconstruction all are waiting to begin.

The magnitude 7.0 earthquake ripped the ground open at 4:53pm on January 12, 2010. The Government has raised its death toll estimate to more than 316,000, but has not explained how it arrived at that number.

The earthquake exploded in a previously undiscovered fault, just 8.1 miles below the surface and 15 miles west of Port-au-Prince, the capital and home to a third of the country's population.

Residents first heard a distant rumbling that reminded many of a passing truck. Then it blasted through everything like an atomic detonation, shattering walls, levelling hillside after hillside of fragile concrete homes and bringing many of Haiti's largest and most important buildings to the ground.

When it was over, a cloud of dust hung over the city, making it impossible to breathe. Those inside the destroyed cities and the even harder-hit towns to the west were trapped - if not literally under the rubble then in a bleeding, screaming island region cut off from the world as the sun quickly dipped below the horizon.

The United Nations lost 102 staffers in the disaster - the largest single loss of life in its history. At UN headquarters in New York, UN staff observed solemn silence for 47 seconds - the duration of the quake. "Every day I see the faces of our fallen colleagues. I hear their voices," Secretary-general Ban Ki-moon said.

At the same time, the Haitian Government had scheduled a nationwide minute of silence, but with few people to organise it went ignored in many areas.

A year after the quake, workers are still finding bodies in the rubble. About a million people remain homeless. Neighbourhood-sized camps look like permanent shantytowns on the fields and plazas of the capital. A cholera epidemic that erupted outside the quake zone has killed more than 3600 people, and an electoral crisis between President Rene Preval's ruling party and its rivals threatens to break an increasingly fragile political stability.

Less than 5 percent of the debris has been cleared. What's left would be enough to fill dump trucks parked bumper to bumper halfway around the world.

It took until today for Haiti's Government to lay the cornerstone for a new National Tax Office. The earthquake shattered the old building, where many workers were killed in one of the blows to the public sector that helped paralyse the Government following the earthquake.

Former US president Bill Clinton attended the cornerstone-laying ceremony with Preval. Later Clinton joined Prime Minister Jean-Max Bellerive to update reporters on a reconstruction process they jointly oversee through the Interim Haiti Reconstruction Commission - a process many Haitians and observers think has failed.

More than $US5.6 billion was pledged at a March 31 donors conference for a period of 18 months, but some $US3.2 billion in public funding is still owed, according to Clinton's UN Office of the Special Envoy to Haiti.

The UN Security Council today called for the "swift disbursement of remaining pledges in support of Haiti's recovery."

Clinton and Bellerive said progress has been made - that half a million people have moved out of the camps that remain home to about 1 million. The aid group Oxfam disputes that figure, saying it's based on imprecise headcounts.

The former president said the conditions for investment were improving and that the pace of reconstruction would soon accelerate.

"I don't blame people for being mad and frustrated. If I were still living in a camp like that after a year I would go crazy, I think," Clinton said. "We are making progress and I understand why people don't feel it."

Bellerive added, "We know that it is difficult for the population, but they understand that there has to be a coherent solution for their situation to improve."

Among the key questions surrounding the commission is how long Bellerive will remain prime minister.

The constitution says Preval should leave office on February 7, though he will not have formally completed his full five-year term until May and he argues that he can remain in office until then.

An ongoing electoral crisis in which three candidates believe they should be in a runoff has delayed the second round. Bellerive admitted he does not know when he will leave office.

Haitian-American musician Wyclef Jean, whose presidential campaign was rejected by election officials, said many people are still hopeful but there are limits to their patience.

"You see them here, you see their energy, and they are smiling. They have hope, which is faith, but they can only have hope and faith for so long," said Jean as he got into a car in downtown Port-au-Prince, surrounded by workers wearing the blue T-shirts of his Yele Haiti charity. "They are hoping that we at home do not forget them and that we put pressure on the powers that be to start the reconstruction because they want to work."

There were scattered protests Wednesday, but the anniversary was not about politics to many of the marchers who crisscrossed the central Champ de Mars Plaza. Most were members of prayer groups giving thanks to God to sparing them from the earthquake.

"It is a grand day for us that we are able to give thanks to God that we are still here," 54-year-old Acsonne Frederique said as a preacher exhorted him and others in the cheering crowd to pray.