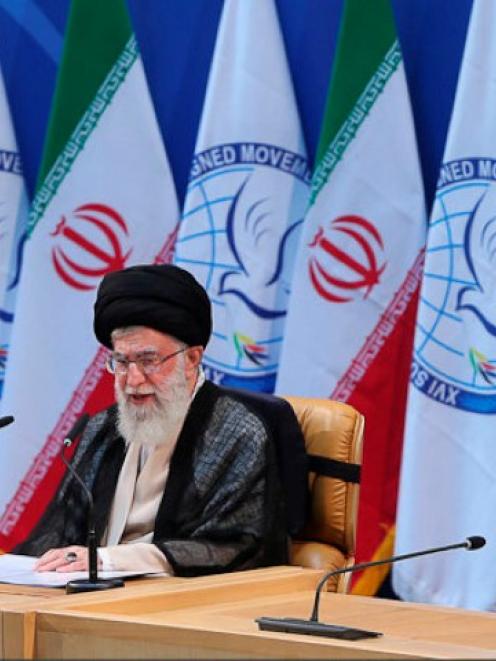 Iran's Supreme Leader Ayatollah Ali Khamenei speaks during the 16th summit of the Non-Aligned Movement in Teheran. REUTERS/Hamid Forootan/ISNA
Iran has doubled the number of uranium enrichment centrifuges it has in an underground bunker, a UN report says, showing Teheran continued to develop its nuclear programme despite Western pressure and the threat of an Israeli attack.

In the weeks and months when Israeli politicians increased their talk of air strikes on Iran's nuclear sites, the Islamic Republic was rapidly increasing the enrichment capacity of its Fordow site, buried deep underground to withstand any such hit.

The UN International Atomic Energy Agency also said in its quarterly report on Iran that buildings had been demolished and earth removed at a military site the IAEA wants to inspect, in what Western diplomats see as a determined effort by Teheran to remove any evidence of illicit nuclear-linked activity there.

These "extensive activities" at the Parchin complex, the Vienna-based UN agency added, would significantly hamper its investigation there, if and when inspectors were allowed access.

In another sign of Iranian stonewalling of the IAEA's inquiry into suspected atom bomb research, it said "no concrete results" had been achieved in a series of high-profile meetings with Iranian officials this year aimed at allaying concern about the country's nuclear ambitions.

"Iran's continued enrichment activities ... serve to taunt all those in the international community concerned by Iran's nuclear programme," a senior Western diplomat said.

The report said that the number of centrifuges at Fordow, near the holy Shi'ite Muslim city of Qom, about 130 km (80 miles) from the capital Teheran, had more than doubled to 2,140 from 1,064 in May.

The new machines were not yet operating, it said.

Iran's supreme leader repeated this week that Iran's nuclear programme was entirely peaceful. "Our motto is nuclear energy for all and nuclear weapons for none," Ayatollah Ali Khamenei told a developing nations summit in Teheran.

But the expansion in enrichment infrastructure and the increasing in stockpiles of potent nuclear material revealed in the report will do nothing to ease fears or reduce the diplomatic and sanctions pressure on Iran.

The IAEA report may strengthen a belief in Israel - which sees Iran's nuclear programme as an existential threat - that the West's tougher economic sanctions against Iran this year are failing to make Iran curb its nuclear work.

"This report corroborates what (Israeli Prime Minister Benjamin) Netanyahu has been saying for years now," an Israeli official said, referring to his view that the diplomatic process had only given Iran more time to pursue its programme.

Iran says it needs the higher-grade material - which is much purer than fuel needed for electricity generation - for a medical research reactor, but it also takes it significantly closer to making potential bomb material.

The amount Iran already has would be enough to fuel the medical reactor for 10 years, an official familiar with the report said, questioning the need for more such uranium.

The IAEA expressed deepening concerns about Parchin, a military site south of the capital that it wants to inspect for evidence of past nuclear weapons development tests. "Significant ground scraping and landscaping have been undertaken over an extensive area at and around the location," it said.

Five buildings had been demolished and power lines, fences and paved roads removed, the report said, activities that would hamper its investigation if granted access.

"The activities observed ... further strengthen the agency's assessment that it is necessary to have access to the location at Parchin without further delay", the IAEA said.

Iran says Parchin is a conventional military facility and has dismissed the allegations about it as "ridiculous".

In a letter to the IAEA dated Aug. 29, Iran said "the recent activities claimed to be conducted" near the site of interest to the IAEA have "nothing to do with it."

Foreign Minister Ali Akbar Salehi, meeting UN Secretary-General Ban Ki-moon in Teheran on Thursday, was quoted by Iranian state television as saying: "The West has put sanctions on Iran for years, however the Iranian nation continues to resist and make progress."