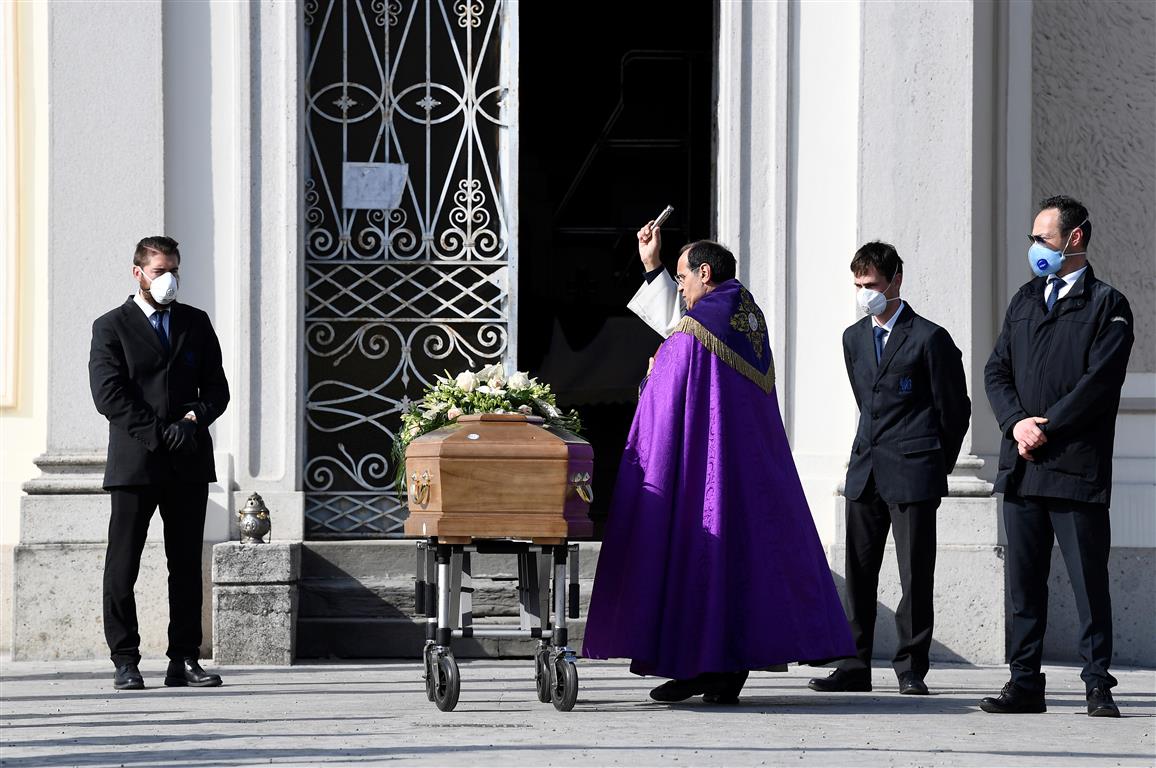 A priest blesses the coffin of a coronavirus victim at her funeral in Seriate, Italy. Photo: Reuters
The death toll from an outbreak of coronavirus in Italy has barrelled past 10,000, a figure that makes an extension of a national lockdown almost certain.

Officials on Saturday (local time) said 889 more people died in the previous 24 hours, the second highest daily tally since the epidemic emerged on Feb. 21, and that total fatalities reached 10,023.

Confirmed cases rose by about 6,000 to 92,472, the second-highest number of cases in the world behind the United States.

Officials said the numbers would have been worse without a national lockdown.

"Without these measures, we would be seeing far worse numbers and our health service would be in a far more dramatic state. We would have been in an unsustainable situation," said Angelo Borelli, the Civil Protection head who reads out the numbers daily to the media and an anxious Italy.

Italy, the first Western country to introduce severe restrictions on movement after uncovering the outbreak five weeks ago, has since increasingly tightened them, and hopes that they would be eased from next Friday were fading fast.

"There are elements that make us believe that all of the April 3 expirations of provision will have to be postponed," Industry Minister Stefano Patuanelli told Italian broadcaster Rai.

The Lombardy region, which has borne the worst of the contagion, recorded 542 new deaths, bringing the total there to 5,944.

Prime Minister Giuseppe Conte told a news conference after the figures were released that he had approved a new package of 4.7 billion euros ($5.24 billion) of measures to help those worst hit, including shopping vouchers and food packages.

Conte has urged the European Union to launch a "recovery bond" to help fund the response to the coronavirus outbreak, saying failure to tackle the emergency would be a "tragic mistake" for the bloc.

In an interview with Italian daily Il Sole 24 Ore on Saturday, Conte said a common debt instrument was needed to spearhead a European recovery and reinvestment plan to support the economy of the whole area.

Education Minister Lucia Azzolina has already said the closure of schools and universities, which began on March 5, would have to be extended past April 3.

"I am afraid that the worries that are affecting large sections of the population over health, income and the future, with the continuation of the crisis, will turn into anger and hatred," Minister Giuseppe Provenzano told La Repubblica newspaper on Saturday.

Michele Emiliano, governor of the southern Puglia region, downplayed played fears of civil unrest in the south but said the lockdown may have to be extended until mid-May.