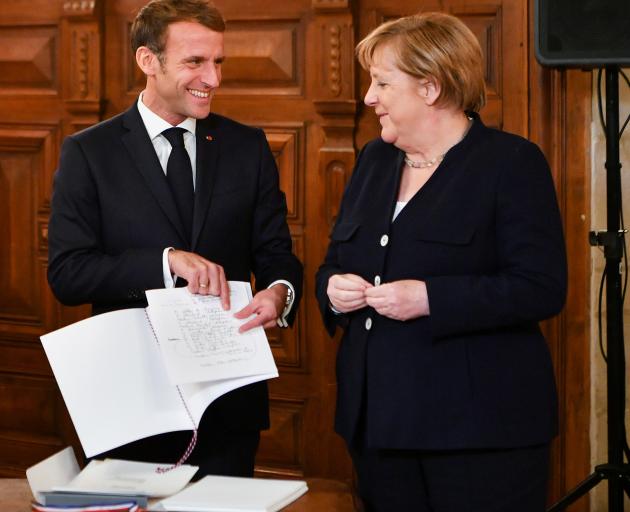 Welcoming her in the heart of the Burgundy wine region rather than at a formal state dinner at the Elysee presidential palace in Paris - where Merkel has known four French presidents - Macron on Wednesday thanked her for her patience with him and the lessons she has taught him.

"Since you have become chancellor, France has learned to know you and to love you," said Macron as he presented Merkel with France's highest award, the Grand Cross of the Legion of Honour.

Macron said Merkel had first worked with French president Jacques Chirac, then with Nicolas Sarkozy to confront the financial crisis and keep the eurozone together, with Francois Hollande to face terrorism and the immigration crisis, and with himself to fight the Covid-19 pandemic.

"You have worked to keep Europe together throughout all these shocks. I hope that the lesson you have left us with, to stand firm against strong headwinds and to make sure that everybody remains united and that things do not fall apart, that this will stay with us," Macron said.

Macron and his wife Brigitte gave Merkel and her husband Joachim Sauer a tour of the 15th-century Hospices de Beaune, a former hospital for the poor which now houses an annual charity auction of Burgundy wines.

At dusk, hundreds of wellwishers lined the streets as the two presidential couples walked around the cobble-stoned streets during Merkel's farewell visit to France as chancellor.

"This is a wonderful place where you can really experience France," Merkel said.

The two leaders made no political statements in Beaune, where their predecessors Helmut Kohl and Francois Mitterrand called for closer European integration during a Franco-German summit in 1993.

Both champions of European integration, Macron and Merkel worked together closely during the Covid-19 crisis, though they were not regarded as being as close as Merkel and her fellow conservative Nicolas Sarkozy, France's president from 2007 to 2012.

Their cooperation during the euro zone crisis earned them the moniker "Merkozy".

Merkel (67), who has led her country for 16 years, will stand down when a new German coalition government has been formed following a September 26 national vote in which she did not seek re-election.