More than 30 die in Iraq blasts 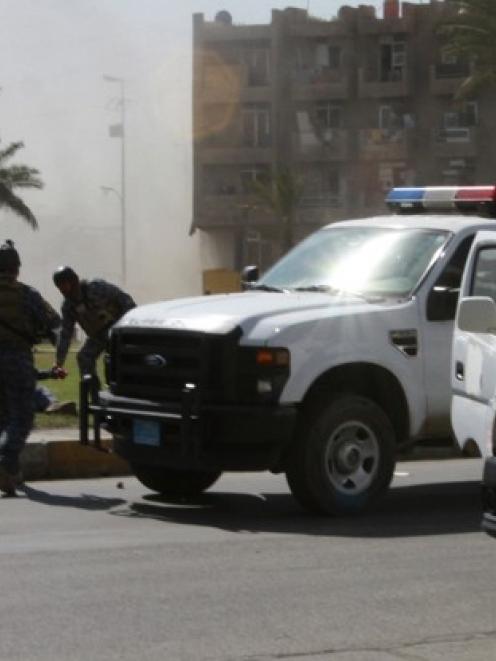 Iraqi security personnel patrol at the site of a bomb attack in Baghdad. REUTERS/Ahmed Malik
Coordinated bomb attacks have killed more than 30 people across Iraq, the latest violence in an insurgency the government has failed to quell more than nine months after the last U.S. troops withdrew.

Violence in Iraq has eased since the carnage of 2006-2007, but Sunni Islamists still launch frequent attacks to undermine the Shi'ite-led government's claim to provide security and prove they remain a potent threat.

No group claimed responsibility for Sunday's string of attacks, but a local al Qaeda affiliate and other Sunni Islamist groups have carried out at least one major assault a month since the last American troops left in December.

In Taji, 20km north of Baghdad, bombs in three parked cars went off separately, killing 11 people and wounding 24, including several policemen. Taji has one of Iraq's largest military airbases but the bombing hit a civilian neighbourhood.

Reuters footage of the scene of one of the explosions showed the remains of an exploded car surrounded by several completely and partially destroyed houses and cars.

"A car bomb entered the area and no one ... noticed this. Why did that happen? All the houses were destroyed," said Khaidar Abas, owner of one of the damaged homes.

In the city of Kut, 150 km (95 miles) southeast of Baghdad, a suicide bomber driving a car blew himself up, killing four policemen, police and local officials said.

Another attack targeted a bus carrying Iranian pilgrims as it passed through the town of Madaen, about 30 km (20 miles) southeast of Baghdad. Two passers-by were killed.

Two more policemen were killed when a car bomb went off in the town of Balad Ruz, 90 km (55 miles) northeast of Baghdad, and bomb planted in a parked car in al Qaeda stronghold Mosul killed a civilian.

The last major attacks occurred on Sept. 9 when a series of bombs in mainly Shi'ite districts killed more than 100 people across the country.

The conflict in Syria has also helped inflame Sunni-Shi'ite tensions region wide, not least in Iraq, where a return to sectarian slaughter is a real risk.

Since the last U.S. troops left, Prime Minister Nuri al-Maliki's Shi'ite-led government has been politically deadlocked and insurgents have continued to strike, hoping to ignite the kind of sectarian tensions that drove Iraq close to civil war in 2006-2007.

Many Sunnis fear the Shi'ite-led government has marginalised them and Sunni politicians say Maliki is failing to live up to agreements to share power among the parties, a charge his backers dismiss, pointing to Sunnis in key posts.

Security was tightened in Baghdad and other provinces since dozens of inmates, including convicted members of al Qaeda, escaped from a prison in the northern city of Tikrit on Friday.