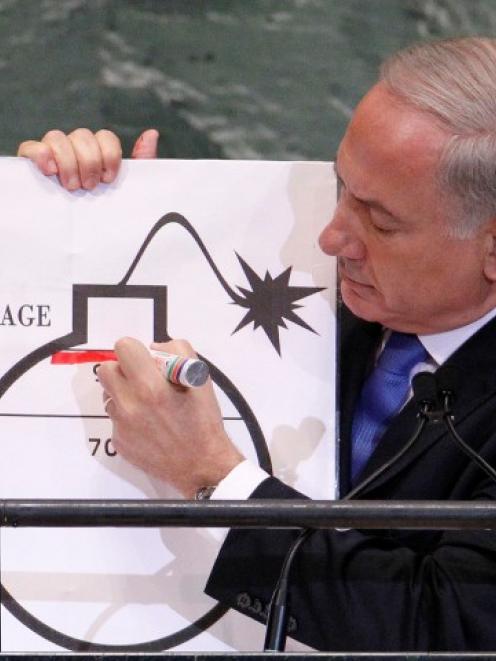 Israel Prime Minister Benjamin Netanyahu draws a red line on a graphic of a bomb as he addresses the 67th United Nations General Assembly at the UN Headquarters in New York. REUTERS/Lucas Jackson
Israeli Prime Minister Benjamin Netanyahu has drawn his "red line" for Iran's nuclear programme despite a US refusal to set an ultimatum, saying Teheran will be on the brink of a nuclear weapon in less than a year.

By citing a time frame in an address to the U.N. General Assembly, Netanyahu - who has clashed with President Barack Obama over the urgency of military action against Iran - appeared to suggest no Israeli attack was imminent before the Nov. 6 US presidential election.

Holding up a cartoon-like drawing of a bomb with a fuse, Netanyahu literally drew a red line just below a label reading "final stage" to a bomb, in which Iran was 90 percent along the path of having sufficient weapons-grade material.

Experts put that at the point that Iran has amassed enough uranium, purified to a level of 20 percent, that could quickly be enriched further and be used to produce an atomic bomb.

Netanyahu told the United Nations he believes that faced with a clear red line, Iran will back down in a crisis that has sent jitters across the region and in financial markets.

"And this will give more time for sanctions and diplomacy to convince Iran to dismantle its nuclear weapons programme altogether," he added.

Netanyahu's remarks were the closest he or any top Israeli official has come to publicly laying out precisely which Iranian actions could trigger an Israeli military strike on Teheran's nuclear infrastructure.

But by referring to a spring or summer 2013 time frame for Iran to complete the next stage of uranium enrichment, the Israeli leader also seemed to dispel, at least for now, fears that Israel might strike Iran before the US presidential election, 40 days away.

Netanyahu's remarks also seemed to deliver a two-part message to the Obama White House - along with Iran's leaders, his most important audience - signalling that the hawkish prime minister wanted an end to the all-too-public war of words with Washington over Iran's suspected nuclear ambitions. But they also showed he was not backing down an inch on his insistence that much harsher warnings must be delivered to Teheran.

"NEXT SPRING OR SUMMER"

In his speech, Netanyahu never explicitly said that if Iran crossed his red line, Israel would launch attacks against the Iranian nuclear facilities, but he did seem to imply such a threat.

"At this late hour, there is only one way to peacefully prevent Iran from getting atomic bombs. That's by placing a clear red line on Iran's nuclear programme," Netanyahu said.

Iran, Netanyahu said, was well into what he defined as the second stage of enrichment - 20 percent purification - and predicted it would complete it by "next spring, at most by next summer, at current enrichment rates."

According to an August report by the U.N. International Atomic Energy Agency (IAEA), Iran has stockpiled 91.4 kg (201.5 pounds) of the 20 percent material.

Some experts say Iran would need 200 to 250 kg (440 to 550 pounds) of such material for a weapon. Other experts suggest less might do it. Iran could potentially reach that threshold soon by producing roughly 15 kg (33 pounds) a month, a rate that could be speeded up if it activates new enrichment centrifuges.

According to the U.N. nuclear watchdog, around 25 kg (55.1 pounds) of uranium enriched to a 90 percent purity level would be needed for a single nuclear weapon.

In his own speech to the General Assembly on Tuesday, Obama said the United States will "do what we must" to prevent Iran from acquiring nuclear weapons and that time is not unlimited for diplomacy to resolve the issue.

Britain, France, Germany, the United States, Russia and China have n egotiated with Iran without success in one form or another for nearly 10 years t o p e rsuade it to halt its nu clear pro gram in exc hange for political and economic incentives.

T he six nations, whose foreign ministers met at the United N ations on Thursday, have held three rounds of talks with Iran this year without visible progress. A US official voiced hope for a fourth round "in the not-too-distant future."

As if to highlight Netanyahu's concerns that tougher U.N. sanctions against Iran are unlikely due to Russian and Chinese resistance, the group failed to agree on any plan for further steps against Teheran, envoys said. [nL 1E8KRIY6]

Obama set no ultimatum or clear "red line" of his own, despite public urging from Netanyahu over the past several weeks that has aggravated strains between the two leaders.

Seeking re-election, Obama has faced criticism from Republican challenger Mitt Romney that the president is being too tough with Israel and not tough enough with Iran.

"I very much appreciate the president's position, as does everyone in my country. We share the goal of stopping Iran's nuclear weapons programme," Netanyahu said.

"Israel is in discussions with the United States over this issue, and I am confident we can chart a path forward together," he said.

He spoke a day after Iranian President Mahmoud Ahmadinejad addressed the General Assembly. Ahmadinejad said on Monday he did not take seriously the threat that Israel could launch a military strike on Iran's nuclear facilities. He also said Israel has no roots in the Middle East and would be "eliminated."

Netanyahu was due to meet with US Secretary of State Hillary Clinton later in the day. White House spokesman Jay Carney said he expected Obama to have a follow-up phone call with Netanyahu, probably on Friday.

Obama has drawn criticism from Republicans for opting not to meet Netanyahu or other foreign leaders on the sidelines of the General Assembly and focus instead on his re-election campaign.

Netanyahu has faced opposition within his cabinet and from former Israeli security chiefs to any go-it-alone attack on Iran. Opinion polls show that Israelis are wary of any such strike by their military, whose capability of destroying underground Iranian facilities is limited.

Israel, believed to have the Middle East's only atomic arsenal, sees a nuclear-armed Iran as a threat to its existence and has expressed frustration over the failure of diplomacy and sanctions to rein in Teheran's nuclear activity. Iran says it is enriching uranium only for peaceful energy and medical purposes, not for nuclear bombs.

"By sometime next year, Iran could potentially amass enough 20 percent enriched material that could - if Iran decides to expel inspectors and convert the material to weapons grade - provide enough nuclear material for one bomb," Kimball said.

"But enough material for one bomb doesn't constitute an effective, deliverable nuclear arsenal."