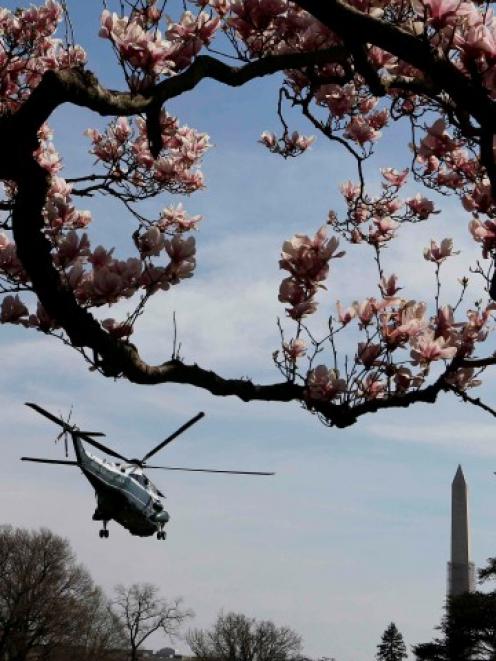 A Marine One helicopter carries US President Barack Obama away from the White House in Washington as he departs for a day trip to Connecticut. REUTERS/Larry Downing
President Barack Obama has urged Americans to pressure a reluctant Congress to pass new gun control legislation - one of his top domestic policy priorities - as he traveled to Connecticut, where December's school massacre took place.

Initial momentum for tougher U.S. gun control laws sought by Obama after the Dec. 14 shootings in Newtown has stalled in Congress in the face of fierce lobbying by gun rights groups like the National Rifle Association.

Obama, speaking at the University of Hartford, said that date changed everything for families of the 20 children and six adults killed at Sandy Hook elementary school.

"I know many of you in Newtown wondered if the rest of us would live up to the promises we made in those dark days ... once the television trucks left, once the candles flickered out, once the teddy bears were gathered up," Obama was to say in prepared remarks. "We will not walk away from the promise we've made."

No major gun legislation has passed the U.S. Congress since 1994 and the current White House guns push is in trouble.

"The policy window is either really close to closed, or closed entirely," said John Hudak, an expert at the Brookings Institution think tank. "In honesty, this is really a last-ditch effort by the White House."

Obama is hoping to build support among lawmakers for several gun control measures, including universal background checks for gun buyers. The Senate is expected to take up gun control legislation as early as this week.

The president has invited 11 parents of children killed in Newtown to fly back to Washington with him aboard Air Force One after his speech. The parents are set to lobby Congress this week for gun control measures, although it may be too late to rescue major legislation sought by Obama.

Some of Obama's proposals - reinstating a U.S. ban on assault weapons and cracking down on high-capacity ammunition clips - already appear to have little chance of passing the Democratic-led Senate, let alone the Republican-controlled House of Representatives.

Obama is hoping to salvage the proposal for background checks on all gun buyers to try to ensure that criminals and others prohibited from buying firearms cannot get them. There are not yet enough votes in the Senate for expanded background checks as Democrats seek Republican votes.

"Congress is only going to act on them if they hear from you - the American people," Obama will say in his address.

Around a dozen Republican senators led by Rand Paul of Kentucky have threatened to use procedural tactics to try to prevent any votes on the gun measures.

Last week, Obama gave a speech in Denver trying to rally support for gun control, touting a new state law in Colorado - scene of two of the deadliest gun massacres in American history - as "a model of what's possible."

The president's speech on Monday will be followed up by a White House event on Tuesday with Vice President Joe Biden and law enforcement officials. Biden also is due to speak about gun control on Thursday on the MSNBC cable TV network.

First lady Michelle Obama is set to address gun control during a visit on Wednesday to Chicago, which has faced a spree of gun violence.