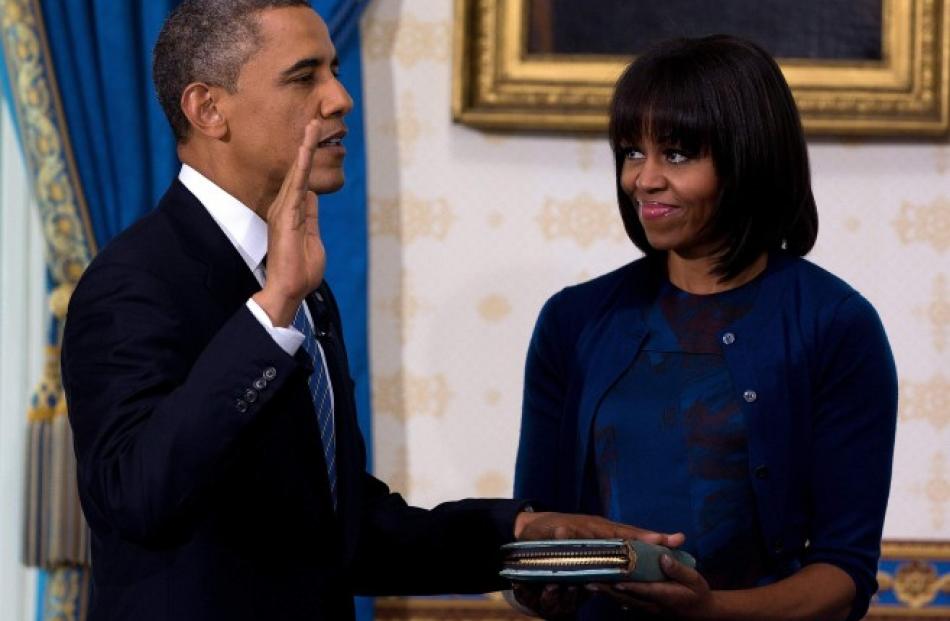 US President Barack Obama takes the oath of office as first lady Michelle Obama holds a bible during the official swearing-in ceremony at the White House in Washington. REUTERS/Doug Mills/Pool

President Barack Obama has taken the official oath for his second term at the White House in a small, private ceremony that set a more subdued tone compared to the historic start of his presidency four years ago.

Gathered with his family in the Blue Room on the White House's ceremonial main floor, Obama put his hand on a Bible and recited the 35-word oath that was read to him by US Chief Justice John Roberts.

Obama hugged his wife Michelle and said, "Thank you," after she congratulated him at the swearing-in.

Obama, who became the first African-American US president four years ago, will be sworn in publicly for his second term on Monday (local time) in a much bigger ceremony before an audience of as many as 800,000 people outside the US Capitol.

Sunday's ceremony was needed because the US Constitution mandates that the president take office on January 20. Planners opted to go with a private ceremony on the actual date and then hold the symbolic inaugural activities the next day.

Obama will have been sworn in four times, two for each term, putting him equal to Franklin Roosevelt, who served four terms. A second swearing-in was needed in 2009 when Roberts flubbed the first one.

Obama, who won a second term on November 7 by defeating Republican Mitt Romney, opens round two facing many of the same problems that dogged his first term: persistently high unemployment, crushing debt and a deep partisan divide over how to solve the issues.

This has taken some of the euphoria out of Obama's second inauguration, but he got a boost at a rousing service at Metropolitan African Methodist Episcopal Church in downtown Washington where he and his wife Michelle, who is sporting a new hair style featuring bangs, clapped and swayed to gospel music.

Early Sunday morning, Vice President Joe Biden was sworn in by Supreme Court Justice Sonia Sotomayor, making her the first Hispanic judge to administer an oath of office for one of the nation's two highest offices.

Obama and Biden then joined forces to lay a wreath of flowers at the Tomb of the Unknowns at Arlington National Cemetery in a solemn remembrance of those killed in the line of duty.