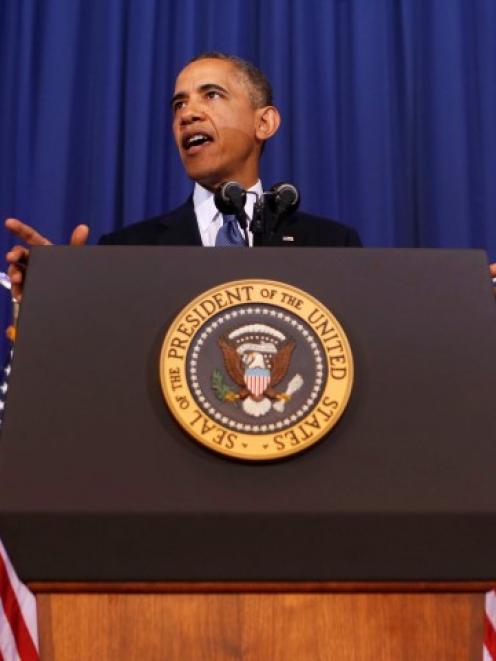 US President Barack Obama speaks about his administration's counterterrorism policy at the National Defense University at Ft. McNair in Washington. REUTERS/Larry Downing
President Barack Obama has outlined plans to limit the use of US drone strikes against extremists abroad and has taken steps aimed at breaking a deadlock on closing the Guantanamo Bay military prison.

In a major foreign policy speech after two weeks of fending off domestic scandals, Obama limited the scope of what his predecessor, George W. Bush, had called a global war on terror after the Sept. 11, 2001, attacks.

"Our nation is still threatened by terrorists," Obama said at Washington's National Defense University. "We must recognize however, that the threat has shifted and evolved from the one that came to our shores on 9/11."

Faced with criticism about the morality of using unmanned aerial vehicles to wage war in distant lands, Obama said the United States will only use drone strikes when a threat is imminent, a nuanced change from the previous policy of launching strikes against a significant threat.

"To say a military tactic is legal, or even effective, is not to say it is wise or moral in every instance," Obama said.

Under a new presidential guidance signed on Wednesday, Obama said the Defense Department will take the lead in launching drones, as opposed to the current practice of the CIA taking charge.

Any drone strike will only be launched when a terrorism suspect cannot be captured. The United States will respect state sovereignty and will limit strikes to al Qaeda or associated targets, he said.

"And before any strike is taken, there must be near-certainty that no civilians will be killed or injured - the highest standard we can set," said Obama.

The use by the United States of armed drone aircraft to attack extremists has increased tensions with countries such as Pakistan and drawn criticism from human rights activists. Obama acted in line with a promise to be more open about the issue.

Obama has faced pressure from both supporters and opponents to allow greater scrutiny of the secretive decision-making process guiding drone use. He said earlier this year he wanted to be more open about the issue.

His policy shift came after the Obama administration acknowledged on Wednesday that four Americans abroad had been killed in drone strikes since 2009 in counter-terrorism operations in Yemen and Pakistan, including militant cleric Anwar al-Awlaki.

Obama defended those operations, saying when a US citizen goes abroad to wage war against the United States, his citizenship should not be a shield.

But in recognition of a debate within Congress about whether strikes could be launched within the United States, Obama said it would not be constitutional to do so.

Faced with congressional opposition, Obama has been frustrated by his inability to carry out a 2008 campaign pledge to close the prison in Guantanamo Bay, Cuba. A hunger strike by 103 of the 166 detainees has put pressure on him to take action.

"There is no justification beyond politics for Congress to prevent us from closing a facility that should never have been opened," Obama said.

While he cannot close it on his own, he did announce some steps aimed at getting some prisoners out. He lifted a moratorium on detainee transfers to Yemen out of respect for that country's reforming government.

He called on Congress to lift restrictions on the transfer of terrorism suspects from Guantanamo and directed the Defense Department to identify a site to hold military tribunals for Guantanamo detainees.

"Where appropriate, we will bring terrorists to justice in our courts and military justice system," he said.

He said he would pick a senior US envoy to handle detainee transfers, a position that has vacant since January.

The speech offered Obama a chance to change the subject after dealing with controversies about his handling of attacks in Benghazi, Libya, where four Americans were killed, Internal Revenue Service scrutiny of conservative groups, and government targeting of journalists in leak probes.