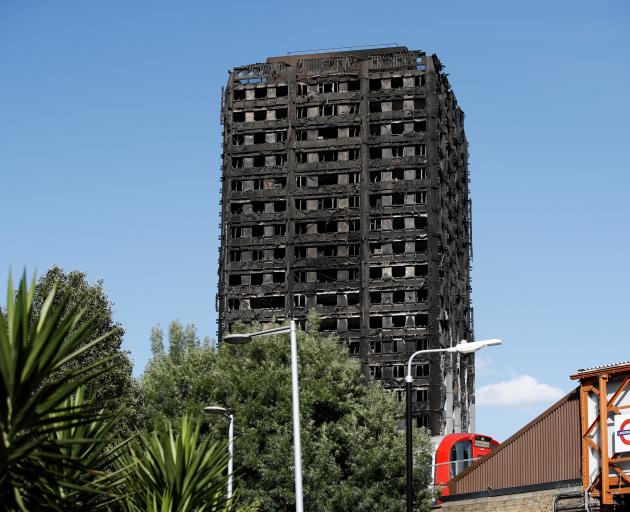 Seventeen people are known to have died in the Grenfell Tower block fire, but the death toll is expected to rise. Photo: Reuters

British Prime Minister Theresa May on Thursday promised a public inquiry into a fire that gutted a 24-storey apartment block killing at least 17 people, as the government faced questions about how such a devastating blaze could have happened.

Smoke was still wafting out of the blackened shell of the Grenfell Tower on Thursday where specialist firefighters and dog search teams faced hazardous conditions as they scoured the wreck, with external cladding still falling from the building.

Fire engulfed the social housing block, where as many as 600 people lived in more than 120 apartments, in the early hours of Wednesday, turning it into a flaming torch in minutes.

"Sadly I can confirm that the number of people that have died is now 17," London police commander Stuart Cundy told reporters.

He said that number was expected to rise and firefighters, who rescued 65, have said they did not expect to find any more survivors. Asked if the final figure would be in double or triple digits, Cundy said: "I'd like to hope that it isn't going to be triple figures."

He said the search of the gutted block might take months and some victims might never be identified. Thirty-seven people remained in hospital, with 17 of them in critical care.

"Our absolute priority ... is identifying and locating those people who are still missing," Cundy said.

An investigation into the cause of the blaze, the worst in the British capital in a generation, was under way. But the shock at its scale turned to anger and recriminations on Thursday.

Accounts of people trapped inside as the blaze destroyed everything around them, shouting for help, throwing children to safety and trying to escape through windows using makeshift ropes from bed sheets tied together left the nation in shock.

"It was so preventable, and that's why we're so angry," said Alia Al-Ghabban, a veterinary receptionist who lives on the estate. "We thought there were going to be riots last night, and if it didn't (happen) last night, it will very soon."

The Syrian Solidarity Campaign said on its Facebook page that Mohammed Al Haj Ali, a refugee from Syria studying engineering in London, was one of those who had been killed.

Al Haj Ali's brother, Omar, who shared the 14th-floor apartment, described a chaotic rescue effort to the BBC. He was led to safety, but his brother was not. As flames got nearer, Omar spoke to his brother by phone.

Opponents of May's government demanded to know whether more could have been done to prevent the disaster, if building precautions such as fire doors had been properly implemented and if spending cuts to local authorities had played a part. 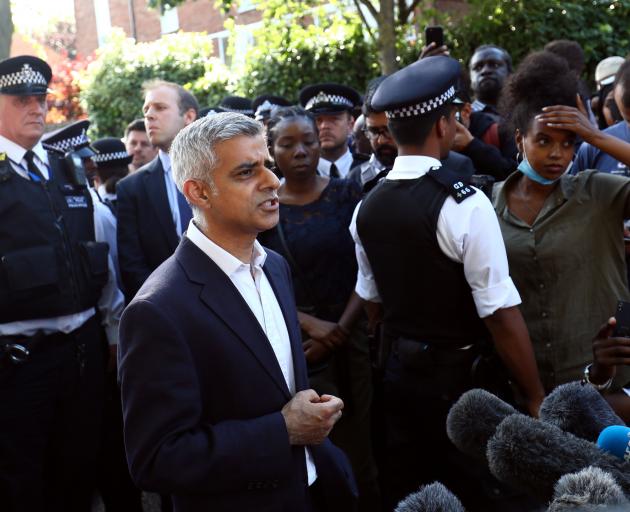 "Right now, people want answers and it's absolutely right and that's why I am today ordering a full public inquiry into this disaster," said May, who visited the scene on Thursday to meet members of the emergency services.

"We need to know what happened, we need to have an explanation of this. People deserve answers; the inquiry will give them."

Local residents say there had been repeated warnings about the safety of the building, which recently underwent an £8.7 million ($NZ15 million) exterior refurbishment, which included new external cladding and windows.

The firm behind the work said the project met all required building regulations. Planning documents detailing the refurbishment did not refer to a type of fire barrier that building safety experts said should be used when high-rise blocks are being re-clad, according to Reuters research.

"We have to get to the bottom of this. The truth has got to come out, and it will," opposition Labour leader Jeremy Corbyn said as he visited volunteers at the site.

London Mayor Sadiq Khan faced demands from clearly furious locals for speedy answers and action when he toured the area.

Sky News showed one young boy shout at the mayor: "How many children died? What are you going to do about it?"

Khan replied that firefighters were still searching the building.

In parliament, the government's fire and housing ministers said other tower blocks which were also recently refurbished would be assessed. They also promised that those who had lost their homes would be rehoused in the local area.

Survivors, many of whom lost all their belongings in the blaze, spent the night at emergency shelters, as charities and local support groups were flooded with piles of boxes full of clothes and bedding from shocked Londoners. 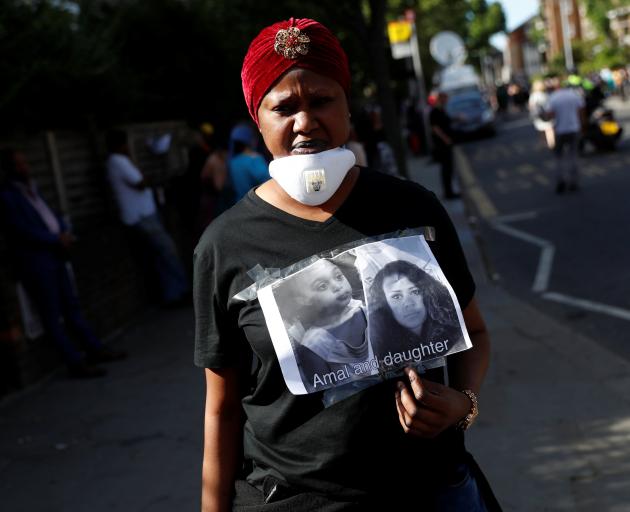 A woman with a poster of missing people. Photo: Reuters

Others gathered seeking news of the missing. Semira Mohammed (37), a science technician who lives nearby, said she knew a family of five who lived on the 21st floor of the block.

"I kept calling and calling," she told Reuters. "The phone was ringing but they didn't reply to us. We were from the same community, and many in the tower were. Maybe 70 percent are from Somalia, Sudan, Morocco."

The Syrian Solidarity Campaign said on its Facebook webpage that Mohammed Al Haj Ali, a refugee from Syria, was one of those who had been killed.

The Queen said her thoughts and prayers were with those families who had lost loved ones and those still critically ill in hospital.

"It is also heartening to see the incredible generosity of community volunteers rallying to help those affected by this terrible event," the queen said.

The singer Adele was among many Londoners who gathered close to the burnt tower late on Wednesday to show sympathy for the victims and survivors.

The tower, built in 1974 on the low-rent housing estate in North Kensington, sits in a part of west London surrounded by some of the most affluent areas of the capital.

By Thursday morning, there was no sign of life in or around the blackened hulk. Security cordons were in place around the base of the tower and the ground was littered with charred debris.

Outside the cordons, impromptu tributes appeared with photos of missing people, messages of condolences, flowers and candles.

"I'm really angry about what's happened," said receptionist Samira Jama (50) who was helping her sister collect belongings from an apartment behind the cordon.

"Hundreds of people still aren't accounted for - what happened to them? Every person in a position of power has to answer questions about this."