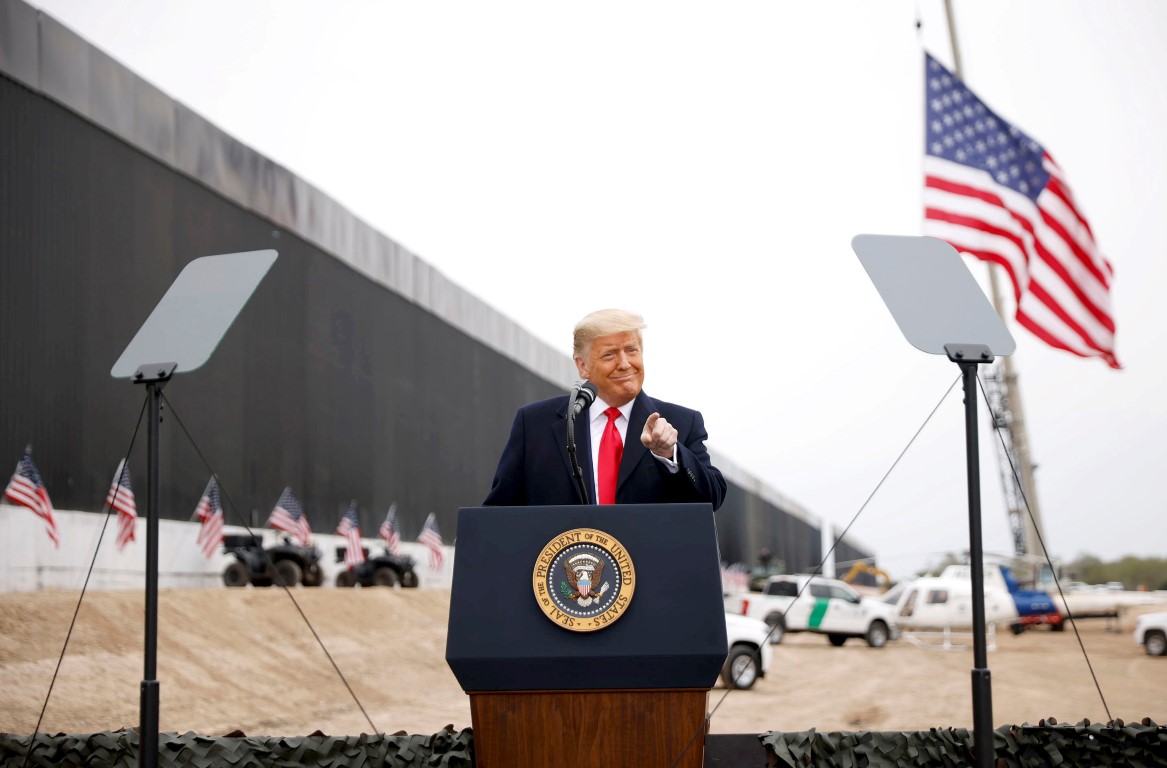 US President Donald Trump speaks during a visit at the US-Mexico border wall, in Alamo, Texas. Photo: Reuters
US President Donald Trump, facing impeachment on a charge of "incitement of insurrection", has denied responsibility for his supporters' violent invasion of the US Capitol last week and said his remarks before the siege were appropriate.

The Republican president told reporters that his speech before last Wednesday's assault - in which he urged supporters to march on the Capitol and fight - had been analyzed by unnamed others, who he said believed it was "totally appropriate."

"If you read my speech ... what I said was totally appropriate," he told reporters at Joint Base Andrews when asked about any personal responsibility he had regarding the Jan. 6 attack when his supporters stormed the Capitol with members of Congress and his own Vice President Mike Pence inside.

"They've analyzed my speech and my words and my final paragraph, my final sentence and everybody ... thought it was totally appropriate," he said before heading to Alamo, Texas to visit and sign his signature wall on the border with Mexico.

Democrats in the US House of Representatives plan to impeach Trump on Wednesday (local time) unless he steps down or is removed before then, which would make him the only US president ever to be impeached twice.

Trump's remarks on Tuesday were his first in public since last Wednesday, although he released a video on Thursday in which he condemned the violence but did not concede the election.

Democrats said Trump's defence of his words and actions underscored the urgency of removing him from office.

"Trump’s lack of contrition today makes clear that the 25th Am (Amendment) must be invoked to remove him," Daniel Goldman, majority counsel in the first House impeachment inquiry, tweeted. "Impeachment should proceed apace and every MOC must think hard about whether s/he supports Trump’s efforts to overturn the election and incite an insurrection on the Capitol."

Trump did not answer a shouted question before leaving the White House about whether he was responsible for the violence at the Capitol, which led to the deaths of six people.

Instead, he blasted Democratic leaders for moving forward on impeachment, warning it posed "a tremendous danger" to the country.

"Trump's threats of more violence by warning of 'tremendous anger' and 'tremendous danger' in response to potential impeachment, a vital mechanism of our democracy, are further evidence of its justice and necessity," he said on Twitter.

As always with impeached ex-president Trump it's always the anonymous "they" who have told him what he's done is appropriate. I believe that "they" are the voices in his head, not real people. Besides, if "they" were real people drawn from his rapidly diminishing team of advisers and allies, it's fairly clear that none of them would have the intestinal fortitude to tell him anything different.

What a disaster that man is. Worth reading 'Everything Trump touches dies'; it's spot on. Sad thing is there are so many who believe his lies.

Alamo? Did he go to San Antone?

Those who call radicals 'conservatives' are delusional and part of the problem. America deserves recovery from the Trumpian aberration. This will be a hard road, because that which true conservatives would never allow to happen - mob invasion of the US Congress - happened. When the unthinkable happens, it is normalised.

Oh say can you see by the Dawn's early light?