Police late on Saturday issued an arrest warrant for 41-year-old Shinji Aoba, suspected of causing Japan's worst mass killing in two decades on Thursday when he went to the studio in western Japan, poured fuel around the entrance and shouted "Die" as he set the building ablaze, according to public broadcaster NHK.

They plan to arrest Aoba, who suffered serious burns and on Saturday was airlifted to a university hospital for treatment, once he recovers, NHK said.

Police said Aoba had previously been convicted of robbing a shop.

Aoba lived alone on the ground floor of a two-floor apartment building on the outskirts of Omiya, a commuter suburb of Tokyo and 500km east of Kyoto.

His next-door neighbour recalled Aoba as pudgy and unkempt, with blemished skin. He kept odd hours and barely spoke to anyone.

"I've never seen him go out during the day, not even to the convenience store. I would regularly hear him go out around midnight," the neighbour, a 27-year-old man who declined to be identified, told Reuters.

Music from video games blared from Aoba's apartment at all hours, the neighbour said, adding that there had been complaints from residents about the noise in the last year.

On July 14, days before the attack, Aoba grabbed and threatened the neighbour over an apparent misunderstanding. It started when Aoba began pounding on the wall to complain about noise, the neighbour said.

When the neighbour went to Aoba's front door to tell him the noise was coming from another unit, he heard a loud wail inside the apartment and then the door opened.

"When he came out of his apartment, his eyes were bloodshot, and he started yelling at me to my face to shut up," the neighbour said.

"He grabbed me by the collar and started pulling my hair. It was terrifying."

After the Kyoto attack, Aoba told police he had done it because the studio had plagiarised his novel, Kyodo news reported.

Kyoto Animation is well known in Japan and abroad for its series and movies, including Violet Evergarden, which has been on Netflix. 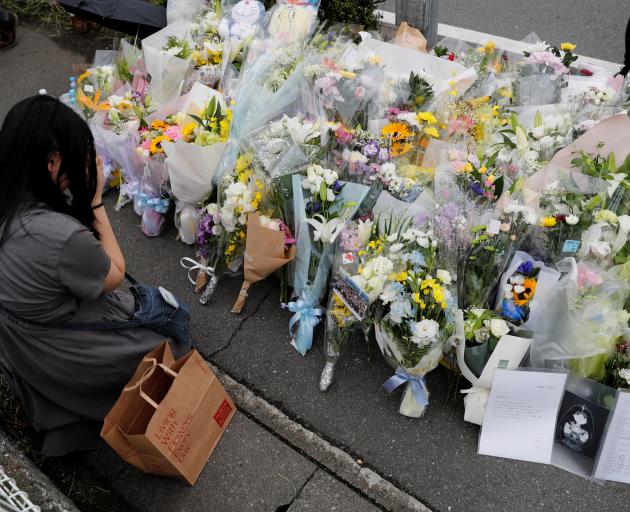 A woman prays in front flowers left for the victims. Photo: Reuters
Aoba had lived in the Omiya apartment for about three years, the neighbour said. Japanese media said he had moved into it at some point following his release from his prison for robbing a convenience store east of Tokyo in 2012. He had also received care for mental illness, NHK said.

The apartment block is typical of the prefab apartments that crowd Japanese commuter suburbs: small, identical units, built with thin walls. Single air conditioners rest on narrow balconies outside each unit. The apartments are usually meant for single occupants and are popular with lower-income and younger workers.

Residents in the area - a rural subdivision off a busy road where recently built homes and unkempt vegetable patches fight for space with a tiny cemetery - said they were shocked by the news of the arson.

"I've lived here all my life, and until very recently, this area has never had any incidents of violence, or talk of violent people living in the neighbourhood," said an engineer in his 20s en route to visit his parents who live near Aoba's apartment.