The acting United Nations co-ordinator in the Pacific understands two people have died following the eruption in Tonga on Saturday.

Fiji-based United Nations co-ordinator Jonathan Veitch said two deaths were confirmed but there were still areas that had not been contacted.

Significant damage has been reported along the western coast of Tonga's main island where a significant clean-up operation is under way. 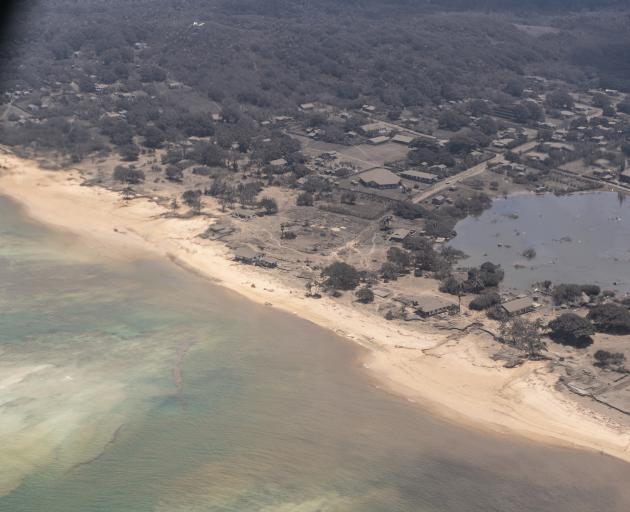 Images taken during the flight show an aerial shot of an island covered in ash, however, it is unknown where the images were taken. Photo: NZ Defence Force
The New Zealand High Commission reported the damage along the western coast of the main island of Tongatapu, where there are many vacation resorts, and the waterfront of the capital, Nuku'alofa.

Satellite images released by the United Nations Satellite Centre (Unosat) are beginning to show the extent of the damage wrought by the eruption and subsequent tsunami. 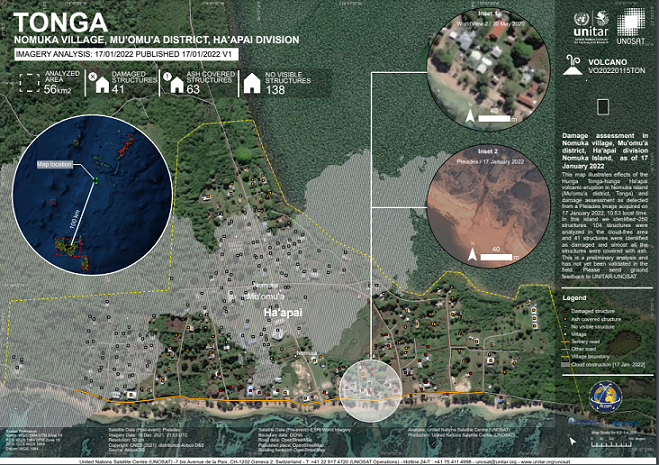 Damage on the small island of Nomuka, in the Ha'apai group in Tonga. Image: Unosat

The images show damage to numerous buildings and structures near village waterfronts, as well as extensive ash cover.

The volcano itself seems to have destroyed the island formed by previous eruptions.

The island looks to have been almost completely inundated. Image: Unosat

Damage to the village of Pangai, the administrative capital of the Ha'apai group of islands in Tonga. Image: Unosat

The South Pacific archipelago has remained largely cut off from the world since the eruption on the uninhabited volcanic island of Hunga-Tonga-Hunga-Ha'apai cut its main undersea communications cable.

A thick layer of ash blanketed the entire island, the High Commission said, adding it was working to establish communications with smaller islands "as a matter of priority."

The brother of a 50-year-old British woman, Angela Glover said she was killed trying to rescue the dogs she looked after at a rescue shelter she had set up with her husband in the South Pacific archipelago.

Glover's brother Nick Eleini confirmed her body had been found. New Zealand state broadcaster TVNZ earlier reported she was missing after being swept away by a wave while her husband managed to hold onto a tree.

"We don't have any further information that would suggest... significant casualties, although, as you would appreciate, information is still relatively patchy," Australia's Minister for the Pacific Zed Seselja told Nine's Today show on Tuesday.

"The priority now will to be get supplies to Tonga, and the biggest constraint on that at the moment ... is the airport. There is still a significant amount of ash."

Damage to the airport on Tonga's main island of Tongatapu. Image: Unosat

The airport was now more likely to be open by Wednesday, he said.

The United Nations said a distress signal has been detected in an isolated, low-lying group of Ha'apai islands, and it had particular concerns about Fonoi and Mango islands. According to the Tonga government, 36 people live on Mango and 69 on Fonoi. 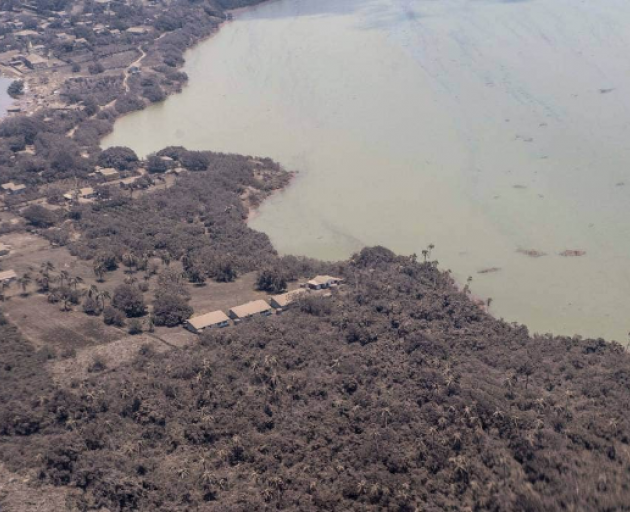 A satellite image posted by the UN Office for the Coordination of Humanitarian Affairs (OCHA) indicated there was damage to scores of structures on Nomuka island.

"Further volcanic activity cannot be ruled out," OCHA said, reporting only minor injuries but emphasising that formal assessments, especially of the outer islands, had yet to be determined.

The Ha’atafu Beach Resort, on the Hihifo peninsula, 21km west of the capital Nuku’alofa, was “completely wiped out”, the owners said on Facebook.

The journey is expected to take three days.

Mahuta said authorities had struggled with communications on the ground so decided to send aid before an official request.

"The delays mean we have taken the decision for both HMNZS Wellington and HMNZS Aotearoa to sail so they can respond quickly if called upon by the Tongan Government," she said.

Henare said the ships would return to New Zealand if not required.

He said the survey and diving teams would be able to assess wharf infrastructure, and changes to the seabed in shipping channels and ports, to assure future delivery of aid and support from the sea.

Tonga is free of Covid-19 and operates strict border controls, so all support is being offered in a contactless way.

The ministers' statement said a further $500,000 in humanitarian assistance had been allocated, bringing the total to $1 million.

New Zealand said a Hercules C-130 aircraft was ready to fly to Tonga on Tuesday to deliver aid supplies as soon as it was safe to land on Tongatapu.

Tonga's deputy head of mission in Australia, Curtis Tu'ihalangingie, said Tonga was concerned that aid deliveries could spread Covid-19 to the COVID-free nation.

"We don't want to bring in another wave - a tsunami of COVID-19," Tu'ihalangingie told Reuters by telephone, urging the public to wait for a disaster relief fund to donate.

Any aid sent to Tonga would need to be quarantined, and it was likely no foreign personnel would be allowed to disembark aircraft, he said.

The eruption of Hunga-Tonga-Hunga-Ha'apai volcano, which sits on the seismically active Pacific Ring of Fire, sent tsunami waves across the Pacific Ocean and was heard some 2300km away in New Zealand.

The impact of the huge eruption was felt as far away as Fiji, New Zealand, the United States and Japan. Two people drowned off a beach in northern Peru due to high waves caused by the tsunami, while officials in Japan reported several evacuations.

The island of Hunga-Tonga-Hunga-Ha'apai all but disappeared following the blast, according to satellite images from around 12 hours later, making it difficult for volcanologists to monitor ongoing activity. Experts said the volcano, which last erupted in 2014, had been puffing away for about a month before Saturday's eruption.

The Red Cross said it was mobilising its network to respond to what it called the worst volcanic eruption the Pacific has experienced in decades.

Relief efforts have been hampered by a lack of communication. Samiuela Fonua, the chair of Tonga Cable, said there were two cuts in the undersea communications cable that would not be fixed until volcanic activity ceased, allowing repair crews access.

"The condition of the site is still pretty messy at the moment," Fonua told the Australian Broadcasting Corp.

*This story was updated on day of publication to clarify there are only two confirmed deaths so far.