Trump will leave tariffs on $200 billion worth of Chinese imports at 10 percent at the beginning of the new year, agreeing to not raise them to 25 percent "at this time", the White House said in a statement.

"China will agree to purchase a not yet agreed upon, but very substantial, amount of agricultural, energy, industrial, and other product from the United States to reduce the trade imbalance between our two countries," it said.

"China has agreed to start purchasing agricultural product from our farmers immediately."

Both countries agreed they will try to have this "transaction" completed within the next 90 days, but if this does not happen then the 10 percent tariffs will be raised to 25 percent, it added.

The Chinese government's top diplomat, State Councillor Wang Yi, said the negotiations were conducted in a "friendly and candid atmosphere".

"The two presidents agreed that the two sides can and must get bilateral relations right," Wang told reporters, adding they agreed to further exchanges at appropriate times.

"Discussion on economic and trade issues was very positive and constructive. The two heads of state reached consensus to halt the mutual increase of new tariffs," Wang said.

"China is willing to increase imports in accordance with the needs of its domestic market and the people's needs, including marketable products from the United States, to gradually ease the imbalance in two-way trade."

"The two sides agreed to mutually open their markets, and as China advances a new round of reforms, the United States' legitimate concerns can be progressively resolved."

The two sides would "step up negotiations" toward full elimination of all additional tariffs, Wang said.

The announcements came after Trump and Xi sat down with their aides for a working dinner at the end of a two-day gathering of world leaders in Buenos Aires, their dispute having unnerved global financial markets and weighed on the world economy.

After the 2-1/2 hour meeting, White House chief economist Larry Kudlow told reporters the talks went "very well," but offered no specifics as he boarded Air Force One headed home to Washington with Trump.

China's goal was to persuade Trump to abandon plans to raise tariffs on $200 billion of Chinese goods to 25 percent in January, from 10 percent at present. Trump had threatened to do that, and possibly add tariffs on $267 billion of imports, if there was no progress in the talks. 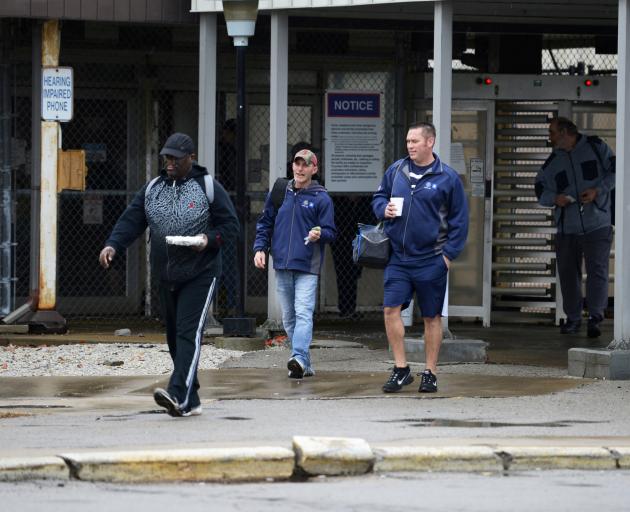 People leave the General Motors Lordstown Complex assembly plant in Warren after it was announced the plant may face closure due to rising steel costs. Photo: Reuters
With the United States and China clashing over commerce, financial markets will take their lead from the results of the talks, widely seen as the most important meeting of US and Chinese leaders in years.

The encounter came shortly after the Group of 20 industrialized nations backed an overhaul of the World Trade Organization (WTO), which regulates international trade disputes, marking a victory for Trump, a sharp critic of the organization.

Trump told Xi at the start of their meeting he hoped they would achieve "something great" on trade for both countries. He struck a positive note as he sat across from Xi, despite the US president's earlier threats to impose new tariffs on Chinese imports as early as the next year.

He suggested that the "incredible relationship" he and Xi had established would be "the very primary reason" they could make progress on trade.

Xi told Trump that only through cooperation could the United States and China serve the interest of peace and prosperity. Washington and Beijing have also increasingly been at odds over security in the Asia-Pacific region.

At the same time, Trump again raised with Xi his concern about the synthetic opioid fentanyl being sent from China to the United States, urging the Chinese leader to place it in a "restricted category" of drugs that would criminalize it.

The White House said Xi, "in a wonderful humanitarian gesture", had agreed to designate fentanyl a controlled substance.

Xi also said that he was open to approving the previously unapproved Qualcomm-NXP deal should it again be presented to him, the White House added.

"This was an amazing and productive meeting with unlimited possibilities for both the United States and China. It is my great honor to be working with President Xi," Trump said in the statement.

Earlier on Saturday, the leaders of the world's top economies called for WTO reform in their final summit statement.

Officials expressed relief that agreement on the communique was reached after negotiators worked through the night to overcome differences over language on climate change.

The final text recognized trade as an important engine of global growth but made only a passing reference to "the current trade issues" after the US delegation won a battle to keep any mention of protectionism out of the statement.

Trump has long railed against China's trade surplus with the United States, and Washington accuses Beijing of not playing fairly on trade. China calls the United States protectionist and has resisted what it views as attempts to intimidate it.

The two countries are also at odds over China's extensive claims in the South China Sea and US warship movements through the highly sensitive Taiwan Strait.

In addition to tariffs on Chinese goods, Trump has imposed tariffs on steel and aluminum imports into the United States this year. Numerous countries have filed litigation at the WTO to contest the levies.

The United States is unhappy with what it says is the WTO's failure to hold China to account for not opening up its economy as envisioned when China joined the body in 2001. The European Union is also pushing for sweeping changes to how the WTO operates.

G20 delegates said negotiations on the summit statement proceeded more smoothly than at a meeting of Asia-Pacific leaders two weeks ago, where disagreement on protectionism and unfair trading practices prevented a consensus.

European officials said a reference to refugees and migration - a sensitive issue for Trump's administration - was excised to ensure consensus.

On climate change, the United States once again marked its differences with the rest of the G20 by reiterating in the statement its decision to withdraw from the Paris Agreement and its commitment to using all kinds of energy sources.

The other members of the group reaffirmed their commitment to implement the Paris deal and tackle climate change.

US officials said a call by G20 leaders for the IMF and World Bank to improve monitoring debt levels was aimed at ensuring that developing economies did not become to heavily indebted to China in return for infrastructure projects.

US officials have warned about China's increasing influence across swaths of the developing world, including Latin America. G20 summit host Argentina is expected to sign a series of deals with China on Sunday during a one-day state visit by Xi.

Apart from trade and climate change, Russia's seizure of Ukrainian vessels drew condemnation from other G20 members, while the presence of Crown Prince Mohammed bin Salman at the summit raised an awkward dilemma for leaders.

Saudi Arabia's de facto ruler arrived amid controversy over the killing of Saudi journalist Jamal Khashoggi, though Saudi officials have said the prince had no prior knowledge of the murder.

The leader of the OPEC heavyweight had a series of bilateral meetings at the summit, including a closely watched encounter with Russian President Vladimir Putin.

Wow. Some good old fashioned, unopinionanted reporting.
Good work ODT. Like your work.
Also, interesting to see Putin and Mohammed bin Salman getting along so well.
I wonder what they have in common.