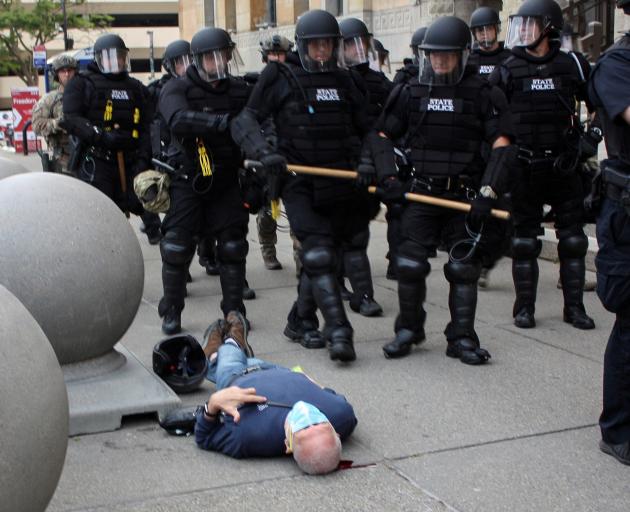 Martin Gugino lays on the ground after he was shoved by two Buffalo, New York, police officers during a protest against the death in Minneapolis police custody of George Floyd in Buffalo, New York. Photo: Reuters
All 57 members of a police tactical unit in Buffalo have resigned from that team to protest the suspension of two colleagues who were filmed shoving a 75-year-old man to the ground, officials of the northern New York city said on Friday.

Two members of the Buffalo Police Department's Emergency Response Team were suspended on Thursday and are being investigated after a local radio station released video of the incident involving the protester, Martin Gugino.

The video, which has been viewed more than 70 million times, shows the white-haired Gugino approaching a line of officers in riot gear. One officer pushes him with a baton and a second one with his hand. He falls, a crack is heard and blood trickles from his head, as officers walk by his still body.

Local media quoted Buffalo Police Benevolent Association President John Evans as saying the officers were doing their job, and that their colleagues on the response team had resigned from the special unit to protest their treatment. The 57 remain police officers, Buffalo Police Commissioner Byron Lockwood said in a statement. Evans could not be reached for comment.

Earlier on Friday a spokeswoman for the local county's district attorney, Kait Munro, said the two officers are under investigation for potential criminal liability in connection with Thursday evening's incident outside city hall.

Buffalo Mayor Byron Brown told a press conference on Friday that contingency plans were in place to address any policing issues due to the resignations and he said state troopers were embedded with Buffalo police to shore up their operations.

"I can say that Buffalo will be safe this weekend," he said.

Brown said Gugino had been "asked to leave numerous times" from the area because of the city's curfew.

Even so, the video footage has raised further questions about police behavior, after the death of African-American man George Floyd in Minneapolis set off nationwide street protests.

The video shows the majority of the officers march past Gugino, though the officer who pushed him with a baton starts to lean over him before he is motioned away by another officer. Someone is heard calling for a medic.

New York Governor Andrew Cuomo said on Friday he had spoken with Gugino and was thankful he survived. Cuomo said the police chief should fire the officers involved.

"You see that video and it disturbs your basic sense of decency and humanity," Cuomo told a daily briefing. "Why, why, why was that necessary? Where was the threat?"

Gugino, who is white, could not be reached. According to a community organizer who has known him for a decade, he is a longtime activist who has advocated for affordable housing, climate justice and police accountability and regularly protested outside the Erie County Holding Center, a Buffalo jail that has come under scrutiny for a string of inmate deaths.

"I've been doing this work for around 10 years, and I can't remember a protest Martin wasn't at," said John Washington, an organizer at People's Action in Buffalo. "Whatever the issues of justice were he stepped up and was always there."

Washington said Gugino had gone to the demonstration to protest brutality by police but "clearly" posed no danger to the officers. He said he had only been able to confirm Gugino was in stable condition.

They should be sacked and any police officer that complains about them being suspended should be sacked as well. "I was just following orders" is not a defence. They Nazis tried that. The police forces in the US need to be cleared of racists. They need a Zero Tolerance approach to racism.

Actually Grizz just following orders is the only defence from war activities. If you don't follow orders you get executed by your own side. The army of every country relies on blind obedience.

The Nuremberg Defence, the last recourse for Nazis.
This wasn't a war! These cops were never going to be shot for not following orders, so the defence does not apply here.
It is a coward's defence anyway, if you tell me to murder a baby or you will shoot me, then you will have to shoot me. I would rather be dead than follow such orders like a coward.

Sounds like you have heaps of experience with these types of organizations. Just kidding! The following orders defence didn't work during World War II or any other time invoked as a criminal defence. Every airman. soldier, sailor, marine and law enforcement officer receives extensive education concerning lawful and unlawful orders during their first week of induction. By the time they graduate, they know what lawful orders are and what to do in the event they receive unlawful orders. They have a far greater knowledge of the subject than you or me. Unfortunately, we only have opinions and not necessarily well-informed opinions at that. While the ideology of blind obedience sounds really good in theorey, it doesnt actually exisist in every country as you state. Most armies in most nations dont rely on people with blind obedience. Most militiaries rely extensivly on written testing and time in grade for enlisted promotions. And officers are promoted based upon time in grade, force requirements and civiliand and professional military education. Making rank is based upon ticking the boxes. Aside from that, nobody is going blindly follow an order thats going to get themself in trouble.