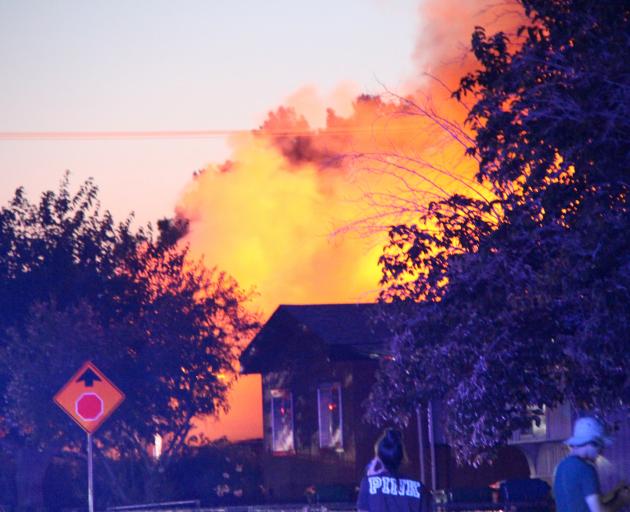 A house burns after gas lines broke during the earthquake in Ridgecrest, California. Photo: via Reuters
A powerful magnitude 7.1 earthquake shook Southern California on Friday, causing some damage to buildings, fires and some injuries, with eight times more force than a foreshock that rattled the same area a day earlier, officials said.

The latest quake struck at about 8:20 p.m. local time (0320 GMT) near the town of Ridgecrest on the edge of Death Valley National Park, about 125 miles (202 km) northeast of Los Angeles, according to the US Geological Survey (USGS).

Ridgecrest Mayor Peggy Breeden said by telephone: "We’ve got fires, we've got gas leaks, we've got injuries, we've got people without power, We’re dealing with it as best we can."

Other officials said the extent of injuries and damage was as yet unknown, but there were no fatalities reported so far.

Friday's quake was the most powerful to hit Southern California since another 7.1 temblor struck the Mojave Desert near the Twentynine Palms Marine Corps Base in 1999, said Lucy Jones, a seismologist for the California Institute of Technology (CalTech).

The San Bernadino County Fire Department reported that Friday's quake had caused some damage to buildings.

Luke Smith, owner of Furys Sports Bar in Ridgecrest, said in a phone interview that Friday's quake shook tiles from the interior ceiling, slightly damaging his bar and knocking down some bottles. Three customers were in the bar at the time but no one was injured, he said.

A swarm of aftershocks have jolted the high desert region of Southern California since a 6.4 quake on Thursday morning near Ridgecrest. Jones said that quake turned out to be a foreshock to Friday's 7.1 tremor. Only a few injuries were reported in Thursday's quake but two houses caught fire from broken gas pipes, officials said.

The Metrolink commuter rail service said on Twitter it had halted service in Los Angeles, a city of 4 million people, for the time being in the immediate aftermath of the latest quake. 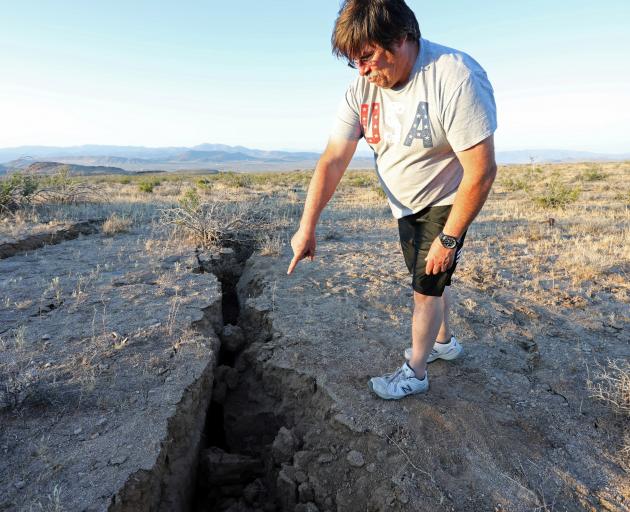 A man looks into a fissure that opened in the desert during a powerful earthquake that struck Southern California, near the city of Ridgecrest. Photo: Reuters
The USGS said Friday's earthquake released about eight times more energy than Thursday's tremor, which rattled buildings and jangled nerves as Southern Californians were getting ready for July Fourth Independence Day celebrations.

Initial estimates had put the force of Friday's quake at nearly 11 times the strength of Thursday's event.

By comparison, the last major destructive temblor to strike Southern California was the 6.7 magnitude Northridge quake in 1994, which was centered in a highly populated area of Los Angeles. It killed 57 people and caused billions of dollars in property damage.

Initial damage reports were much lighter from Friday's quake, which unleashed greater force than the Northridge event but was much less consequential because it was centered in a remote, sparsely populated area.

The quake, however, was felt over a wide area - as far west as the Pacific Coast town of El Segundo, adjacent to Los Angeles International Airport, and as far east as Las Vegas.

Pools in Los Angeles sloshed wildly and TV cameras at major league baseball's Dodger Stadium were shaking as they filmed the night game between the Los Angeles Dodgers and the San Diego Padres.

The quake forced the National Basketball Association (NBA) to cancel the finish of a two Summer League games in Las Vegas while engineers checked to see if the temblor compromised the integrity of an arena on the campus of the University of Nevada Las Vegas.

"Guys didn’t know what was going on," Christian Wood, a Summer League player on the New Orleans Clippers, was quoted as saying on the NBA's website. "Some guys were still playing on the court."