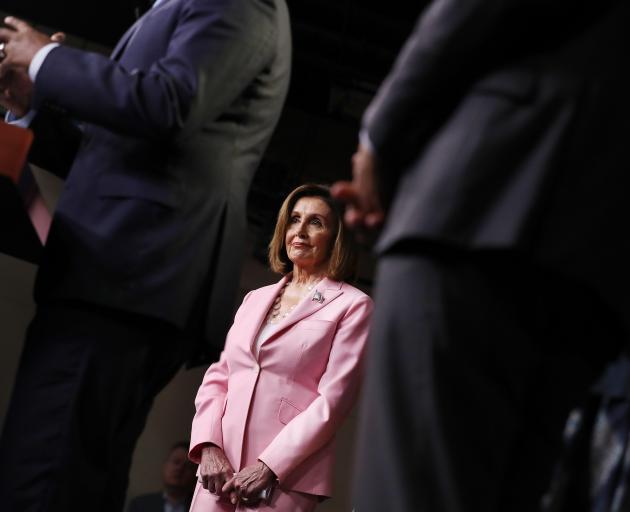 Have Nancy Pelosi and the House Democrats picked the right time to proceed with impeachment inquiries? Photo: Getty Images
Democrats waited for their moment and, when the President of the United States, Donald Trump, started to believe he was secure, they struck. Will his complacency fell him? Sarah Churchwell writes.

Nancy Pelosi's decision to begin a formal impeachment inquiry against Donald Trump, following reports that he used the power of his office to solicit interference by a foreign government in the 2020 United States election, makes him only the fourth president in US history to have this notable distinction, with Bill Clinton in 1998, Richard Nixon in 1973 and Andrew Johnson in 1868.

The picture changes by the hour, but the main story concerns Trump's apparent offer to Ukraine's President, Volodymyr Zelenskiy, to unfreeze $40million in (Congress-approved) military aid if he would investigate Joe Biden, the current frontrunner in the Democratic primaries.

The conversation so shocked a member of the intelligence community that they filed an official whistleblower complaint. The White House then appears to have engaged in a cover-up, in part by keeping these conversations from officials who would normally have access to them, as well as allegedly moving the transcript of the call to a secret computer system (the Presidential Records Act of 1978, passed in response to the Watergate scandal, mandates that all presidential records must be officially preserved).

Since the Democrats took majority control of the House of Representatives in January, Pelosi's caucus has been under intense pressure from some to impeach Trump, based on his first two years in office, beginning with his firing of James Comey as FBI director to thwart investigations into his own activities.

In practice, the House gets to decide, but it must tread warily. For example, in 1868 it charged Johnson with 11 articles of impeachment, including contempt of Congress, and "bringing disgrace and ridicule to the presidency". While it is tempting to ponder Trump being impeached for bringing disgrace and ridicule to the presidency, it is hard to see the Senate being convinced. Historically, other impeachment articles have included abuse of power, lying under oath, and obstruction of justice, all of which are likely to hold more sway with both the Senate and the American public.

Nor does impeaching Trump guarantee his removal: Clinton and Johnson were both impeached by the House but acquitted by the Senate. (Impeachment works like a trial, with the House prosecuting, the chief justice of the supreme court presiding, and the Senate as jury voting whether to convict.) The House only needs a simple majority to pass articles of impeachment, but conviction requires a two-thirds Senate majority: 67 votes. No US president has ever been removed by Senate vote, and Mitch McConnell's Senate has, thus far, implacably voted along party lines to protect Trump.

Many have concluded that impeachment would be at best pointless, and at worst destructive, when the Senate seems all but guaranteed to acquit. They also point to Trump's near 90% approval rating among registered Republicans.

One obvious rebuttal to this line of reasoning is that upholding the rule of law matters in principle, as does accountability. Nor is public opinion fixed. It could easily shift toward removal as hearings brought wrongdoing to light; this is what led to Nixon's resignation. Senators in close-fought seats who voted to acquit a president widely viewed as guilty might also find themselves paying the price in next year's elections.

But there are other arguments against letting McConnell's presumptive support for Trump sway the decision about impeachment. One is that you can't end corruption by waiting for the corrupt to give you permission. But it also simply isn't true that Republicans in Congress are in thrall to Trump personally. Most of them merely hitched their buggies to his circus wagon.

McConnell almost certainly views Trump as a useful idiot, one to cut loose the moment he becomes a liability. We might note, in this context, theWashington Post's report that McConnell seems to have urged the White House to release the damning memo of Trump's phone call with Zelenskiy. Trump's mental competencies are in serious question, but McConnell is more than capable of the second-order thinking required to convince Trump to incriminate himself. And there is another option, unpalatable to many, but undeniably real: if McConnell decides that his interests are best served by Trump's removal, he can always offer Trump and his family a full pardon from President Pence in return for resignation.

But that's all a long way off, while information emerges at dizzying speed. The former special ambassador to Ukraine Kurt Volker just stepped down amid rumours that he intends to reveal what he knows, while Congress has subpoenaed Secretary of State Mike Pompeo.

Once it becomes clear that the Trump White House is a sinking ship, we should expect to see more and more officials desert it. As for the supposedly fearsome support of Trump's oft-cited "base", which has become something of a political bogeyman, its ferocity is a function of its dwindling size. A 2018 Rasmussen report found that 40% of US voters identify as Democrat, 28% as independent, and only 29% as Republican: increasingly, only diehard Trump supporters will be left, and they are vastly outnumbered by his critics.

In hindsight, it is hard not to conclude that in biding her time Pelosi was waiting to reel Trump in.

He appears to have been emboldened by feeling above the law, behaving with ever greater abandon, while Pelosi waited patiently for him to shoot that gun on 5th Avenue, as he kept threatening to do. Perhaps it was just a happy accident that Pelosi gave Trump all the rope with which he proceeded to hang himself, but her intention is now moot: that's how it has played out.

Trump's pattern of grandiosity, delusions of superiority, profound entitlement, desperate need for admiration, and bitter spite all but guaranteed the outcome: he wouldn't be able to resist abusing his power, and didn't. Trump loves to brag that he's the most successful president in US history - but if he is actually convicted by the Senate and removed from office that will make him, officially, the least.

- Sarah Churchwell is author of Behold, America: A History of America First and the American Dream.

Well that was shallow and predictable.
No mention of Hunter Biden's dismissal from the military for cocaine use.
No mention of Hunter Biden traveling on Airforce Two with his dad and then getting a position on the board of a gas company for $50/mth.
No mention of Biden boasting he had the prosecutor investigating THAT company sacked in 6 hours by holding back a billion $ of US military aid, while Russian took back the Crimea. You can find it on Youtube.
Then there is the billion $ contract Hunter got from China using similar methods.
By far the saddest thing about all this, is that it has all happened under the Clinton - Obama era, that I once believed in.
American politics has become very corrupt over the last decades. It is very much a swamp.

The 'Law?' The lawless are fighting the law. The once sane Democrats have become completely unhinged.